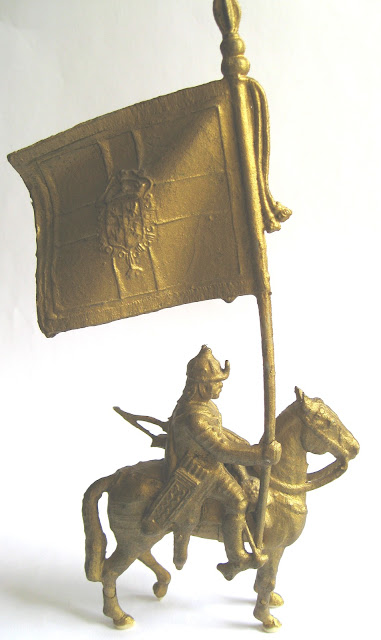 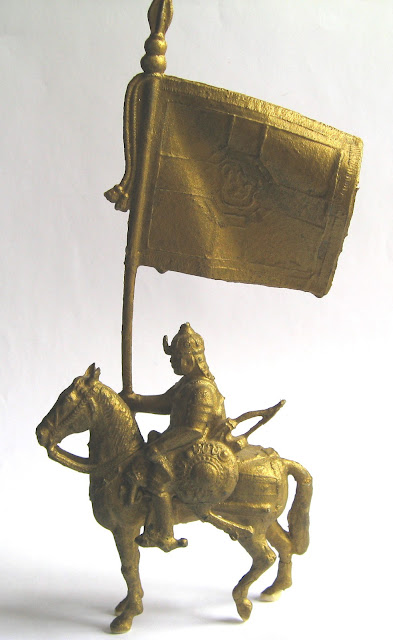 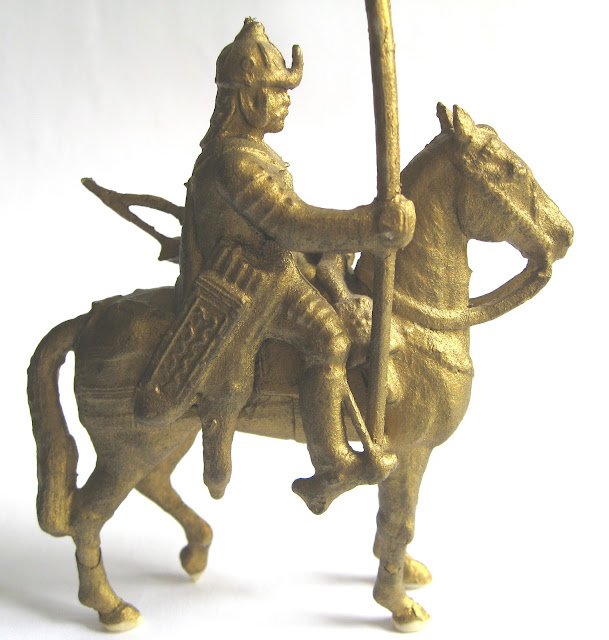 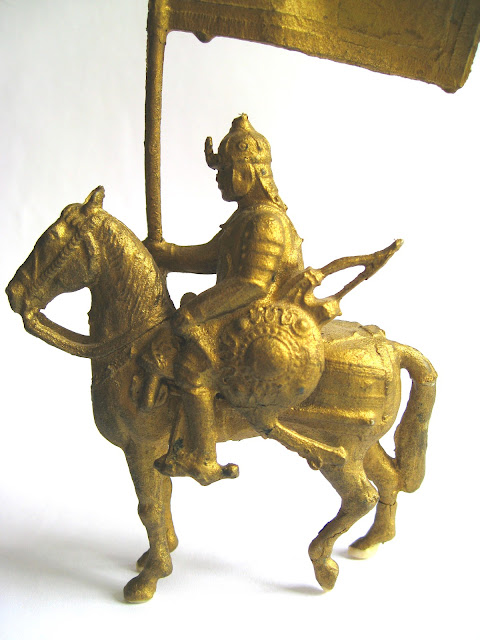 I have only ever seen the King and the Lancer fully painted, the rest are always coated in gilt as shown above, I think this chap will be a contender for a repaint.  Such a shame they never made the Turks to oppose them.
Posted by Brian Carrick at 06:41 8 comments: 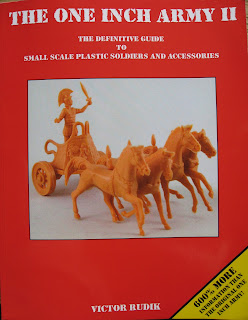 Let me state for the record that I do not collect small scale plastic figures (of course I have some, but I don't seek them out) so what possessed me to shell out £35 for this book? Well in part it was the sales pitch from Patte who appealed to the miser in me by pointing out that if I wanted to buy it later the shipping cost from Canada would be an extra £32, you can't argue with logic like that!  The main reason is that there's so much information here you simply have to have it, it's a great book to just dip into then you just keep looking at more and more and more.....................
Posted by Brian Carrick at 14:31 12 comments:

You never know what will turn up at the Plastic Warrior Show, a curious item that caught my attention was this Britains "Eyes Right" series box of French St. Cyr Cadets. 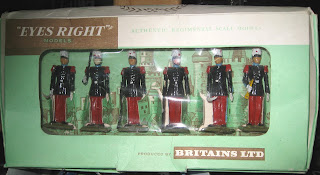 The wording and style of print have been lifted from original Britains packaging but the box colour and the way it opens by lifting the cellophane fronted lid are all wrong. 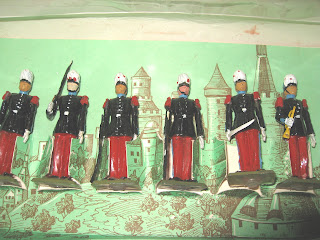 Inside the box there is a printed insert which looks to be a French Chateau, the figures look to me to be copies of Starlux and they are held in place by wings cut into the insert.  The figures are a good 60mm high and made in hard plastic, painted to a good standard. 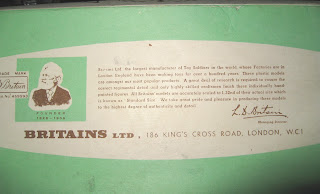 Underneath the box the wording is once again copied from original Britains packaging.
So what is it - a rare Britains set made in France or a fake made to catch the unsuspecting collector?
The answer is neither it was made in Poland, and the quality looks very good, I think any serious Britains or Starlux collector (which I am not) should include something like this in their collection for a bit of fun.
Posted by Brian Carrick at 12:09 4 comments: 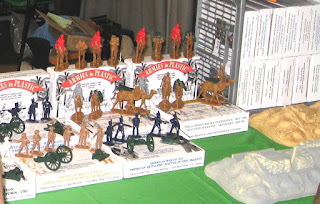 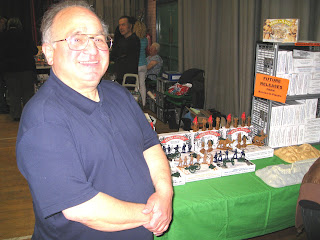 And here's the man who makes them, Tony Ciccorello (hope I've spelt that right) of Armies in Plastic.
Posted by Brian Carrick at 14:32 5 comments:

Now that I feel suitably recovered from the exertions of the day here are a few of the photos I took at the Plastic Warrior Show last weekend: 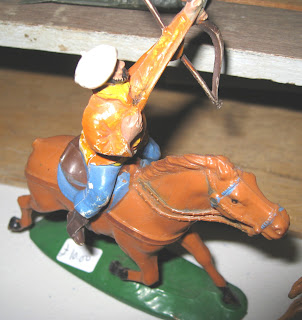 This rather fine mounted Saracen made in France by JIM was on the stall of Belgian collector Daniel Lepers, shame about the horse's tail though. 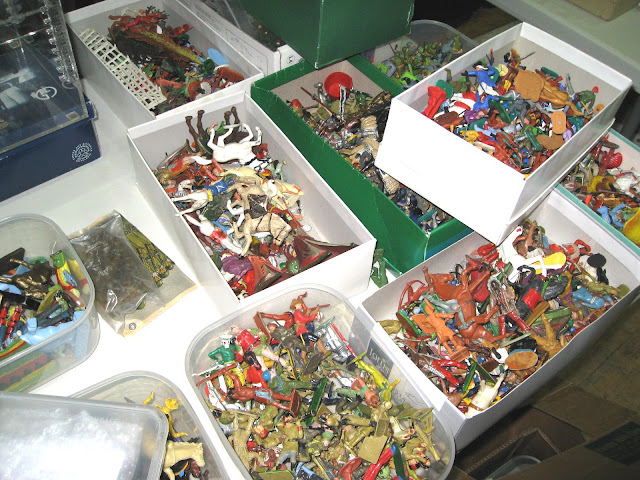 The joy of attending a show is the plethora of boxes to rummage through. 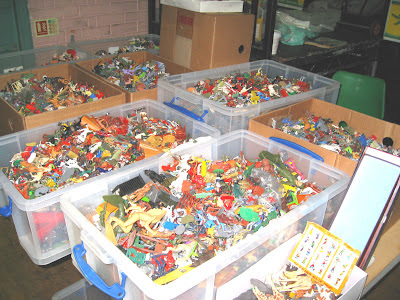 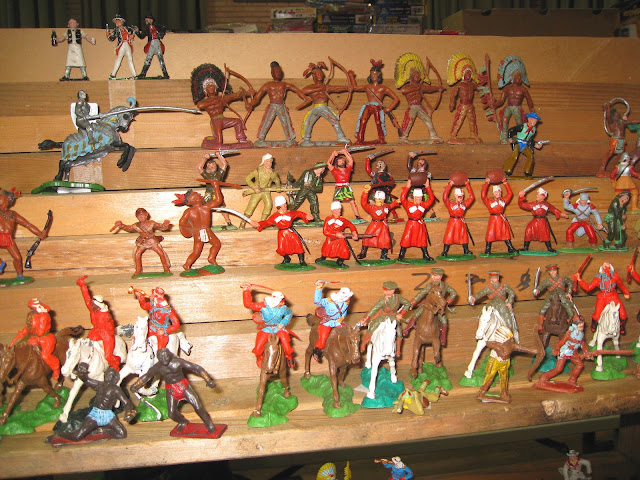 And then some good stuff

At the start of the show these shelves were full, you can see from the gaps that by the time I got my camera out nearly half had been sold by collector Joe Bellis.  Click on the picture to enlarge then click again and you will see:
Top row - bartender and gambler with derringer pistol from the Cherilea Western Bar Brawl set.
Second row - Large scale (65/70mm) Lone Star Indians, these have swoppet heads, looks like the whole set here.
Third row - The Cherilea Great Helm Knight, originally made in hollow cast lead as part of the Baronial Series, the mould for the horse was modified for the plastic version to make it a rearing rather than charging pose, also I have never seen the plastic version with the knights helm so I suspect they dispensed with it.
Fourth row - Four Monarch Highlanders (two each with double handed sword and claymore and buckler shield) which I mentioned recently in the post about Monarch Conquistadors, a Speedwell FFL, a Trojan WW2 Australian and at the end a Britains ECW roundhead.
Fifth row - A couple of the rare Crescent 65mm Mohicans, a Cherilea Davy Crockett, seven Timpo Cossacks - very hard to find these undamaged, Charbens FFL officer and another of the Trojan Australians.
Bottom row - Crescent mounted Arabs, FFL and First World War British Cavalry, the foot figures are two Cherilea Nubians, a prone Japanese machine gunner from Trojan (hard to see), a very rare Cherilea Indian firing a bow - previously made in hollow cast lead and finally a Cherilea Davy Crockett.
Posted by Brian Carrick at 08:17 2 comments: 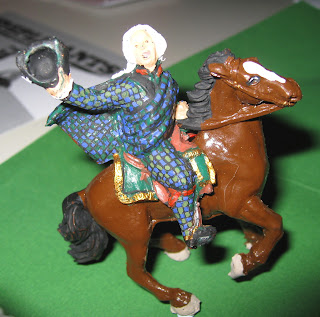 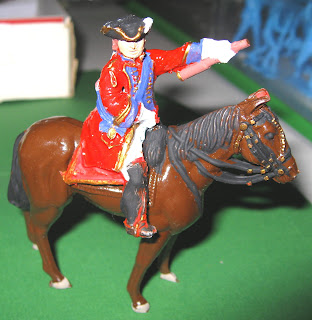 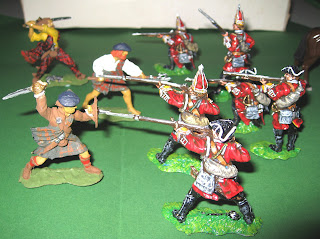 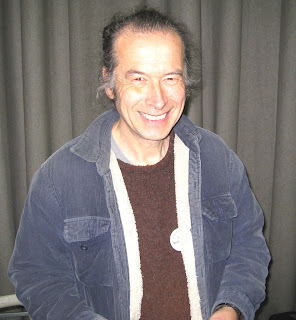 Peter Cole of Replicants at the 27th Plasstic Warrior Show - 5th May 2012
Posted by Brian Carrick at 13:11 No comments: