I went along to the London Toy Soldier Show back in March, but I'm only getting around to putting up the pictures now, It's been that sort of a year! I have to say the event was rather sparse compared to pre-pandemic times but I suppose that's only to be expected as people begin to re-emerge and things slowly get back to the old normal.  Nonetheless I managed pick up a fairly eclectic haul, but first stop was at the game being run by members of the Little Wars Revisited Forum. 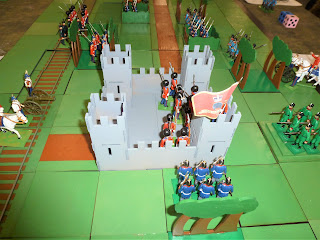 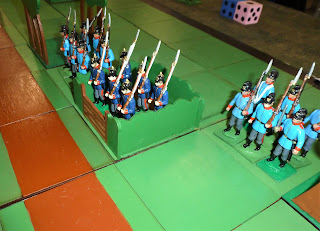 The stylised terrain is really quite charming..... 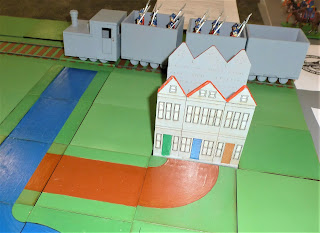 ......as is this rather neat little armoured train! 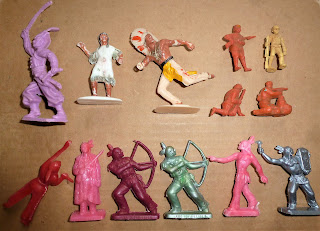 I bought these from Harry Kemp who just returned with a junk box of plastics from the Nanterre Show in Paris. Top left is a copy of an Elastolin Turk made by Cane of Italy, next two are by JEM of France and the bottom row are by Bonux of France. The four small size figures of WW2 Russian and Japanese infantry were premiums in packets of bubble gum available across the EU in the 1970's under various names such as Dargaud y Tito and Dunkin. 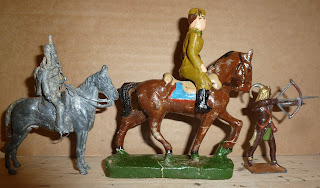 Odds and Ends!  A rather fine Swedish hussar from the Tennfigurer range made by Holger Eriksson, I'll get around to painting him one day (hopefully) the mounted figure in the centre is made of a composition material in post-war Communist Hungary and finally a Britains hollowcast Togoland Warrior in need of some TLC. 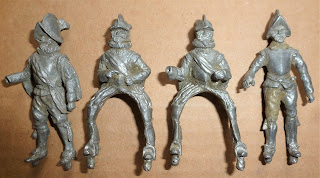 I've no idea what these are or who made them, solid white metal and quite chunky, I have them in mind for a Wars of Religion project which has been simmering on the back burner for several decades, the riders will be going on nice sturdy Deetail mounts.