Yesterday saw 9 enthusiasts meet in a London park for the long awaited Waterloo 200th Anniversary Celebration Wargame.  The sun shone as 2,000 54mm toy soldiers were unpacked and positioned to refight the battles of  Wavre and Waterloo across two vast windswept fields.  I've always thought the importance of Wavre was rather underrated in the potential importance and significance it had on the outcome of the 100 days campaign, so I was glad to see it included in this event.  The players commanding on the Waterloo field set up their respective troops while the Wavre Battle was played out and therefore didn't know whether it would be Blucher's Prussians or Grouchy's French that would arrive to take part in the main event.

This isn't a battle report (look out for a full report on the Megablitz and More blog, see blog list to the left) just gratuitous pictures of some lovely toy soldiers out in the grass on a sunny day. 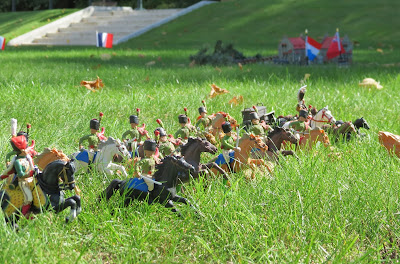 French light cavalry and horse artillery approach Mont St. Jean, in the background is the chateau of Hougoumont 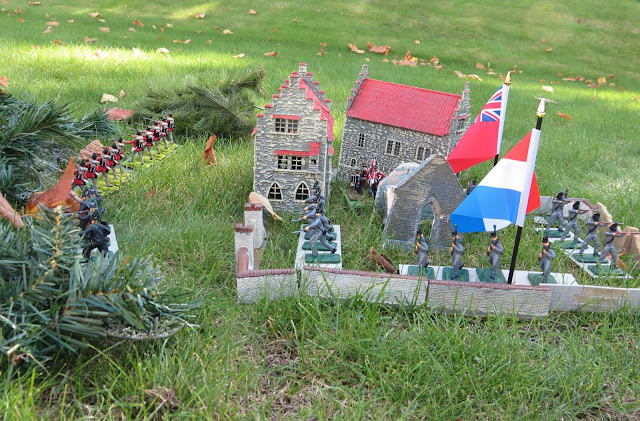 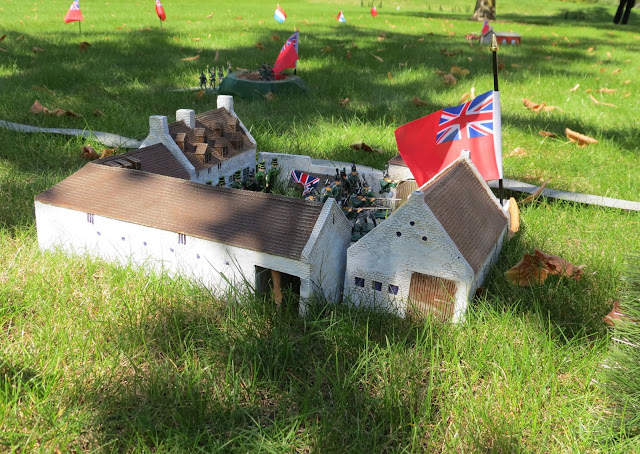 The farmhouse of La Haye Sainte viewed from Mont St Jean, beyond it is the sandpit defended by the 95th Rifles.   The flags in the background represent troops which are not yet visible to the enemy, some may be dummy markers. 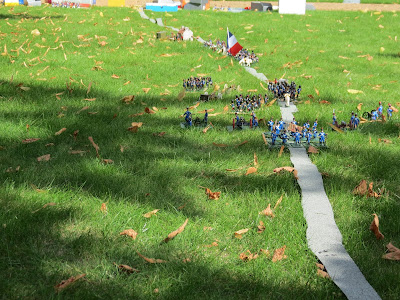 French infantry and artillery deploy before La Haye Sainte, further back on the road Napoleon and his staff  confer at the Inn of La Belle Alliance 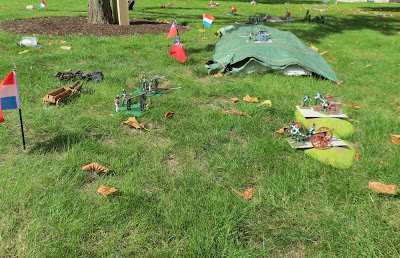 Allied artillery dominate the centre of the field from the heights of Mont St Jean, the much vaunted new fangled Rocket Battery proved devastatingly ineffective! 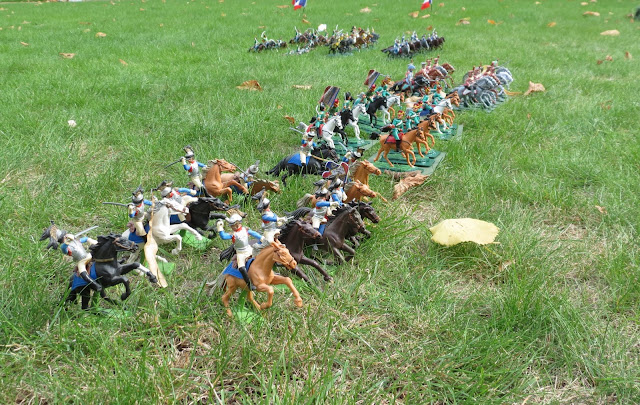 French cavalry masses on the plain before Mont St Jean 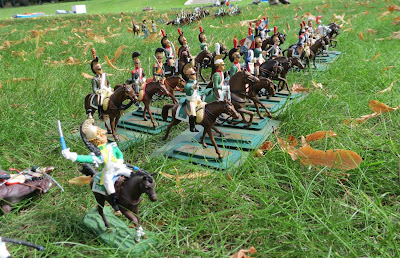 The charge is sounded 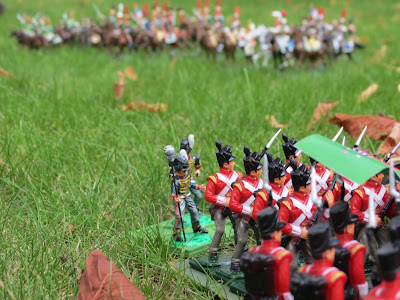 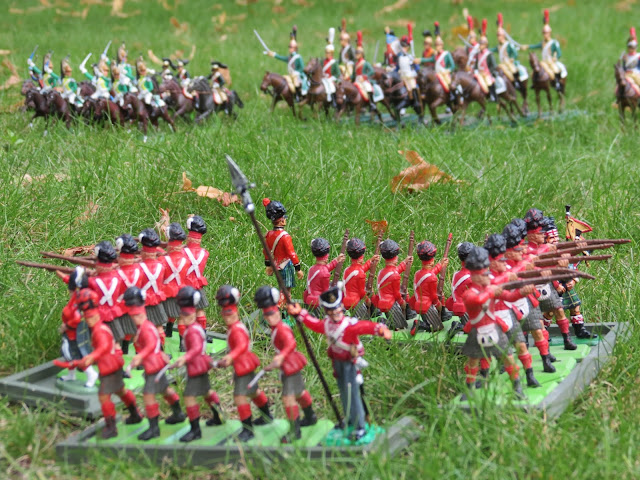 The squares hold as the horsemen surge around them 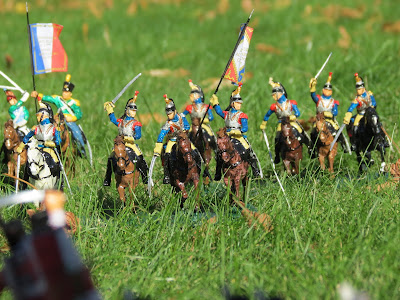 The cavalry reform for another attempt 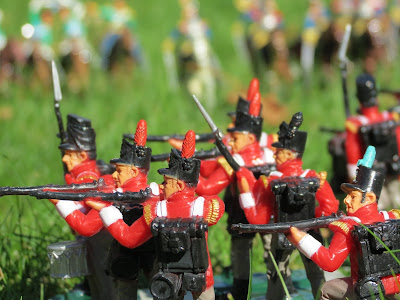 The steady British infantry await the next wave 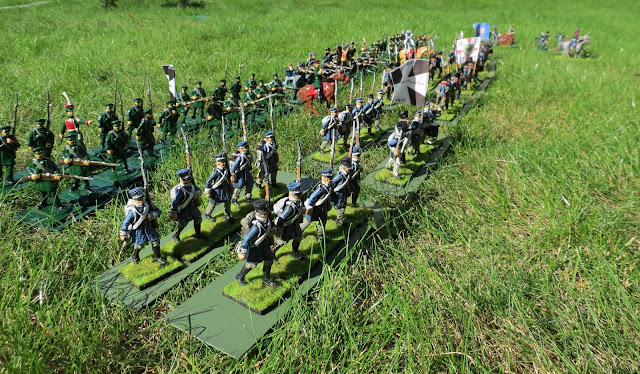 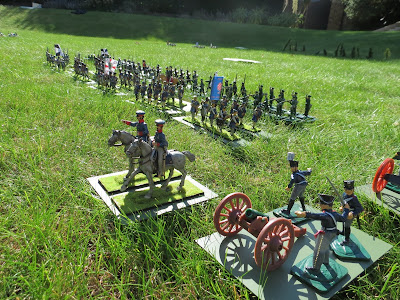 The Prussian artillery opens up..... 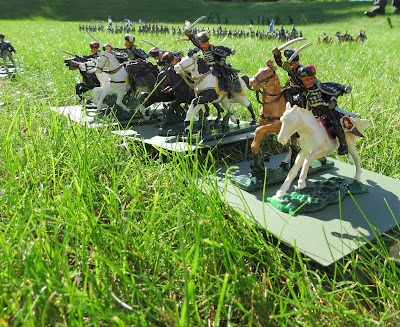 ....in support of the cavalry 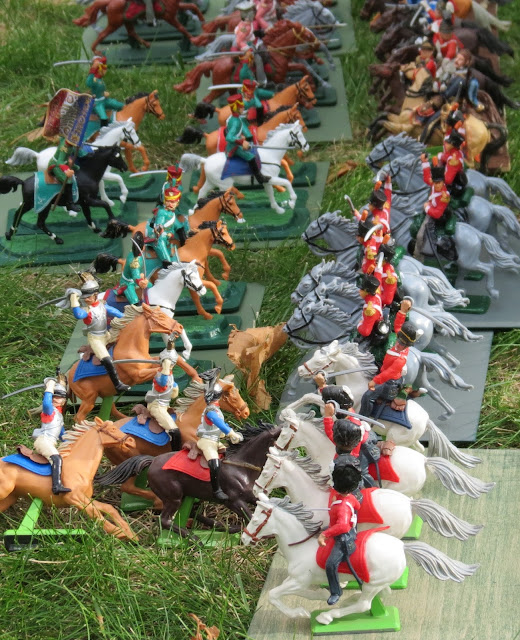 The final act on the plains before Mont St Jean, the massed cavalry clash 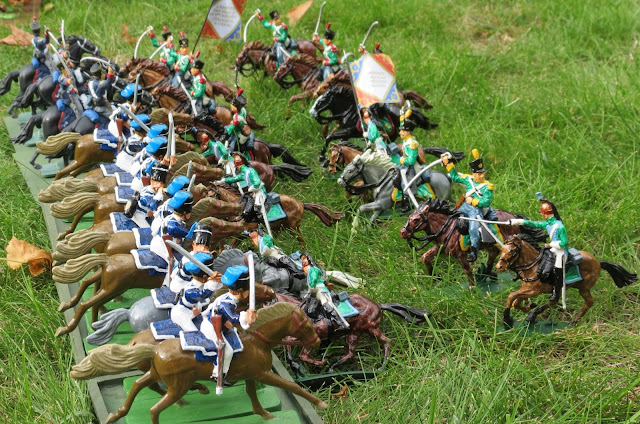 The melee continues for several rounds 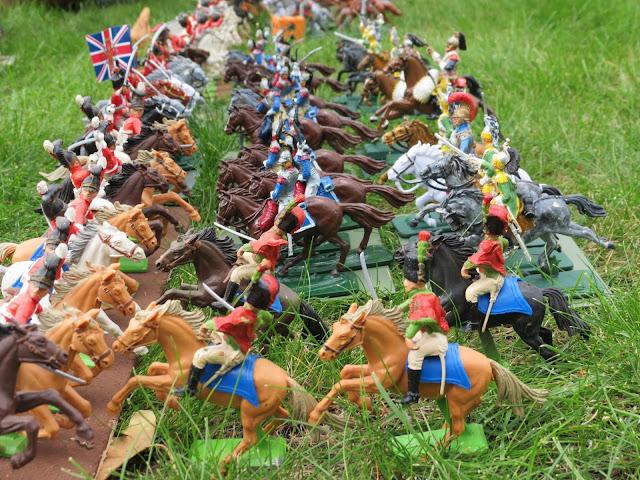 Until both sides brake off  and retire

The field of battle was so large that you couldn't follow anything that was going on elsewhere, only the the action you were immediately involved with, and that's how it should be.  So this is just a flavour of the biggest game we've played to date and no doubt there will be reports on the many other actions played popping up elsewhere on the blogosphere like here on Wargaming Miscellany.