Over the past few years I have been building up a Prussian army for the 7 Years War, some of which has featured on this blog and that of Vauban & Shandy  The quality of modelling hasn't been as high as the period deserves due to the limitations of my skill and patience, both of which are intolerably low, but they have a naive charm to them which works for me.

So what is this ramble all about?  well, since before I started this project I've always wanted to have a unit of Hussars in mirliton helmets and about a year ago I picked up four suitable heads from Alexanders Toy Soldiers (ATS) - this is what I did with them: 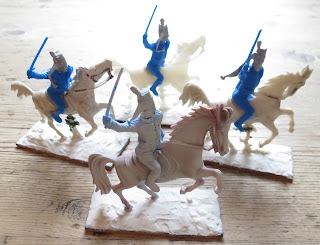 The ATS heads on Dulcop Napoleonic hussar bodies and mounted on horses by Jean Hoefler, the later are a bit "My Little Pony" but I quite like their jauntiness and they paint up nicely.

Since then I've squirrelled away enough body parts to make 24 figures, which in my little Toy Soldier world equates to three Regiments - but what to paint them up as?

My original thought was one of those black clad Totenkopf outfits but now that seems a bit dramatic for the table top and in any case I do like a bit of colour.   Also, what to do with the other two Regiments?  I currently have one each of Cuirassiers and Dragoons so three units of Hussars would surely be too unwieldy?

I draw heavily on the Kronoskaf site for research and I'm currently recruiting for the armies of  Brandenburg, Austria and Russia, as well as others outside the 7YW period, so my question to you dear reader is what should I paint these three Regiments up as?  Your consideration in this matter is much appreciated.