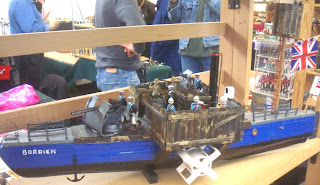 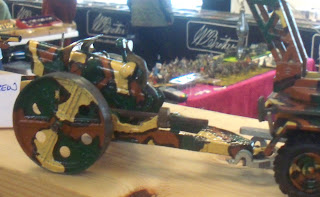 And finally..........mention of H G Wells leads me neatly onto the Little Wars Centenary Games to be played out over the weekend of 27th/28th April at the Royal Military Academy Sandhurst.  Sadly this event is not open to spectators or the public as Sandhurst is a high security military base but several of the participants are regular bloggers so hopefully we will see plenty of reports with photos after the event.  I shall be leading out my redoubtable Ottoman army and the games will be played outdoors so I am keeping my fingers crossed for good weather!
Posted by Brian Carrick at 08:26 4 comments:

Time seems to be running away from me just lately, a few weeks ago I went to the London Toy Soldier show, trading appeared very slow to me but among the highlights I saw this rather nice little collection of Belgian composition figures on the table of Mercator Trading. 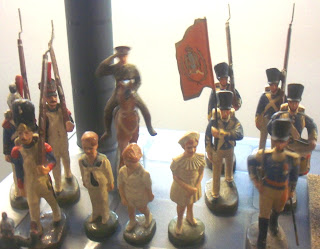 In the centre a mounted King Leopold III of Belgium and his three children by Queen Astrid, Lto R: Prince Baudouin, Prince Albert and Princess Josephine-Charlotte.  They are flanked by Napoleonics: on the left by three French infantry and on the right what I take to be Belgian infantry of the United Provinces (I'm basing this on what I can see of the standard).  Made in Belgium by N.B. (Nazaire Beusaert), I estimate that they were made about 1939 when Josephine-Charlotte would have been aged 12, Baudouin 9 and Albert 5, there is no figure of Queen Astrid as she was killed in a car accident in 1935.  The mounted Leopold is quite common but I'd never seen the children before and they make a charming little group, it saddens me to reflect that within a year of these figures being made Belgium had been overrun and the family's life turned upside down by war. 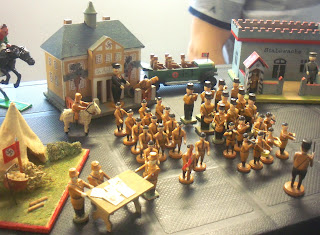 On the same table was this collection of mid 1930's carved wood "erzgebirge" style SA men (I use the word  guardedly as it's in danger of becoming a generic term for any Germanic folksy type wood carved figure when it more comfortably refers to touristy Christmas tree decorations, which these are surely not).  I've not seen so large a collection as this before, it includes field tent, SA barracks and a staff HQ, the bandsmen in black caps are SS, going by the various sizes and styles of carving these have been pulled together from several makers.  Individually the figures have a simple naivety about them but en masse they evoke the era and regime that produced them, and I find that rather chilling.
Posted by Brian Carrick at 06:55 6 comments: