Last weekend our stalwart wargaming friend, Anthony, called over to test out another scenario from One Hour Wargames (OHW) by Neil Thomas. This time dice were thrown to select the scenario and fate handed us Fighting Retreat, myself on the run with two units of knights, one of men at arms and one of archers, while Anthony took up the chase with four units of knights, one of archers and a hotch potch of the levy.
Here's how the action panned out: 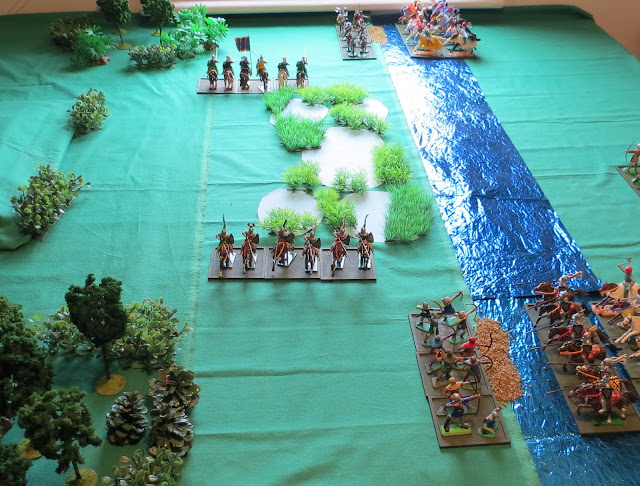 The opening moves see the renegades cross the river, do they make a stand and hold the two fords or run for the hills?  My natural instinct was to pull the archers back into the treeline where they would be safe from the thundering hooves of the knights, I'm sure this is what they would have done in reality but the rules don't allow any units into the woods. With these medieval rules, archers in woods would be nigh on unassailable so we went with the premise that if the footmen reached the safety of the woods they would just disperse and melt away into the undergrowth. 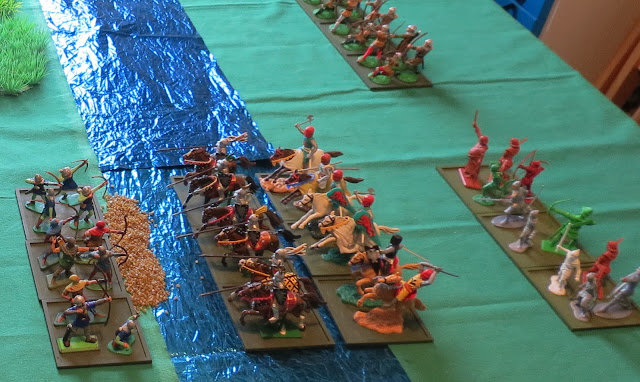 The archers got off one volley before the horsemen were upon them, the outcome was never in any doubt but the footmen were now playing for time and held out rather longer than one might reasonably have expected. 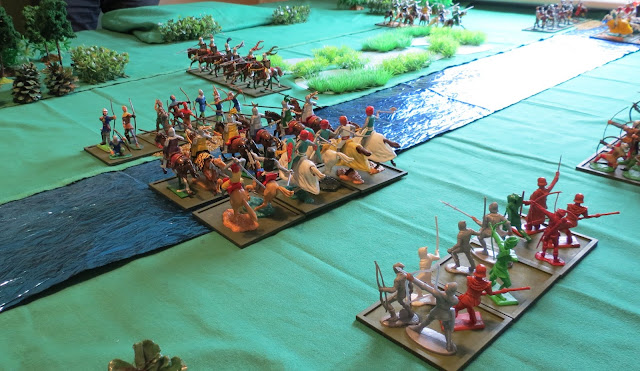 I couldn't think what toys to use for the levy (in the right foreground) so I quickly cobbled together some odds and ends of Robin Hood figures. I really don't like putting unpainted figures on the table and was doubly annoyed after the game to remember my Elastolin swappet Saxons which would have been perfect for this role, drat! 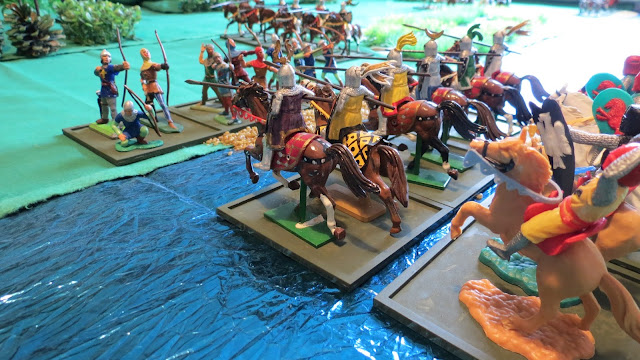 The archers succumb to the onslaught from the pursuing knights and their own horsemen, waiting in support, finally pile in to hold the line at the ford. 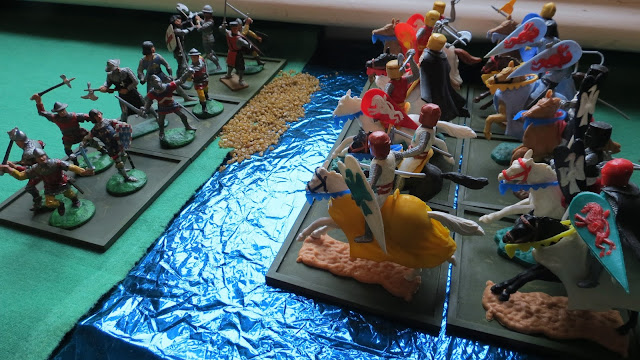 It was much the same story at the second ford, where the men at arms held off their attackers until being ridden down and eventually reinforced by their own body of knights. 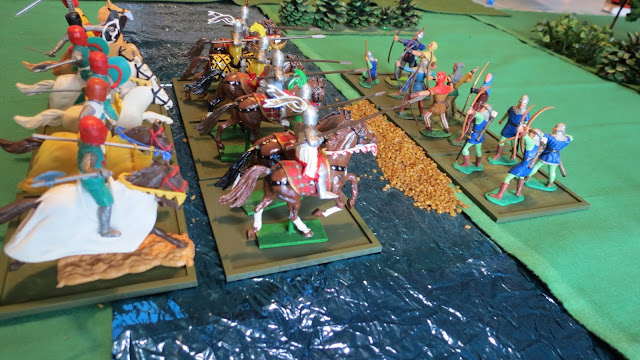 And that was about it, the renegades held out until about round 12 before being eliminated, leaving the pursuers to ride on and capture the objective by round 15, thus winning the game.

There's a lot I like about OHW, primarily the simplicity, easy to learn, quick to set up and play, needing little space and few figures. But after two games it's feeling a bit limited to me, I feel a larger area and more units are needed to give more flexibility, as it stands there isn't much room for manoeuvre and units in melee can't disengage until one is eliminated so it's all too easy for a game to end up as one long slugfest (or perhaps I'm just a crap General?).

Where we see this going is to continue using the core game system but use the whole 10' x 6' table area (as opposed to 6'x6') increase the max number of units from six to ten, increase troops types from 4 to 5/6 and set out terrain based on sections of historic battlefields.  Will these alterations change the dynamic of the game? What do you think?

Email ThisBlogThis!Share to TwitterShare to FacebookShare to Pinterest
Labels: medieval, One Hour Wargames