On a recent visit to Hastings, land of Jack in the Green, Bonfire Boys, Grey Owl and all things 1066, I happened to mention to Mrs C that when I was a boy I regularly holidayed here with my parents and one year discovered a museum up on the cliffs which had a diorama of the Battle of Hastings. I could remember it clearly in my minds eye, it was massive, built on a table which filled the room and composed of tiny Airfix figures, the whole thing covered in a glass case.  But on subsequent visits I could never find that museum again, had I just imagined the whole thing?

We set off from the Pier, scaled the cliffs and with the aid of a map (a map! why didn't I think of using one of those before?) the museum was quickly found, smaller and less imposing than I remembered but it was in the right location, that was a start.  Inside.....no diorama, in fact hardly any mention of the Battle at all! (instead whole rooms devoted to Grey Owl and conservation).  As we gathered up our disappointment and made to leave I noticed a few figures behind glass, 30mm flats, not what we had come in search of and so poorly lit that you could barely make them out.

Descending the cliffs we returned to the Old Town and resumed our holiday, sampling local ales and poking around in the myriad junk shops until we entered what appeared to be a second hand book shop and in a corner at the back we found this: 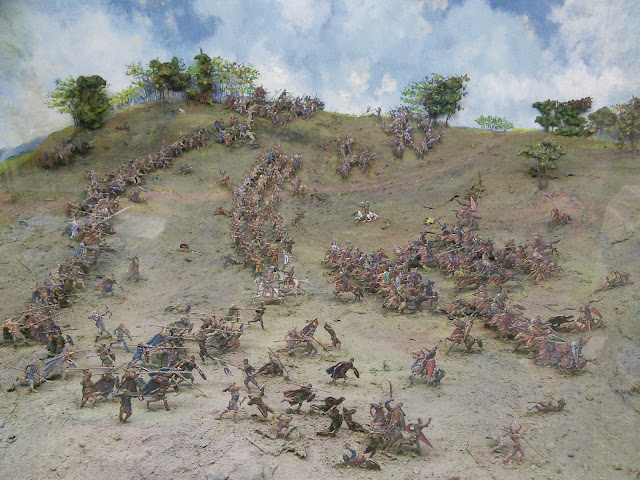 In a large glass case but looking rather dull and dusty was this diorama of the Battle of Hastings, much smaller than I remembered and comprising 30mm German tin flats not 20mm plastic Airfix figures, sadly this couldn't be the diorama from my childhood. 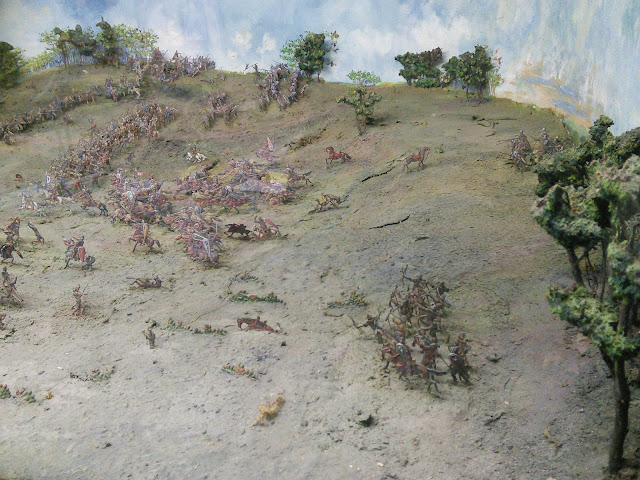 But it was!  I enquired about it's origin from an elderly gentleman who seemed to be in charge of the shop (sadly I didn't get his name) and he told me that it was indeed the diorama which had originally been housed in Hastings Museum up on the hill, the local borough Council had revamped the museum to make it a more interactive educational resource (oh, and also a venue for weddings and social events) for the community.  In this bright new vision there was no place for a big old box full of tiny tin soldiers so the diorama was broken up and put into storage, in due course the storage area was to be cleared out and the gentleman I was talking to had saved what was left from going in the skip. 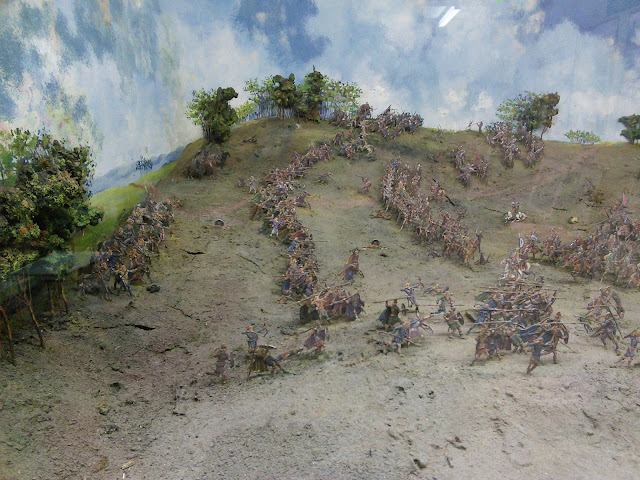 What remains is less than half, probably about a third of the original model, and without the centrepiece vignette of King Harold being shot in the eye by an arrow, which was retained by the museum and was the group of figures mentioned above that I had seen there.  Okay I can see that an old careworn exhibit isn't going to fit in with the needs of the modern world but I still felt it was an act of institutional vandalism, similar to what's been done at the National Army Museum (don't get me started on that) 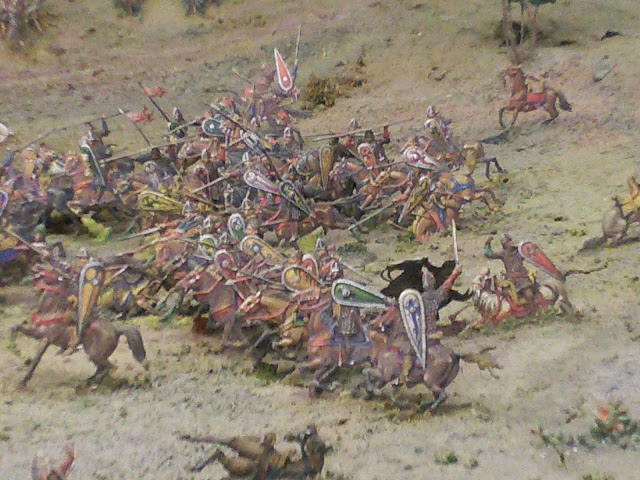 I went back to take a longer look at the diorama to see how my memory could have been so misplaced, and then in the corner I noticed a small plastic plaque simply engraved D Stokes, London WC1 and I realised I was looking at one of the fifteen famous dioramas commissioned by the legendary collector, Otto Gottstein, for display in 1937 at the Royal United Services Museum in Whitehall. 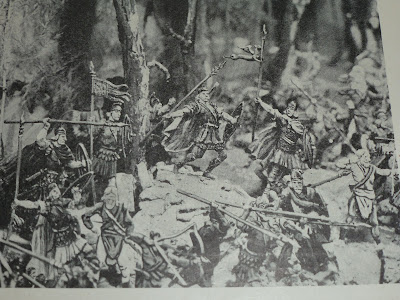 I didn't get a photo of the death of King Harold when I was at Hastings Museum, the display was just too dark, fortunately there is a monochrome pic of it in the 1937 catalogue for the RUSI museum exhibition.  And here it is, Harold is centre stage about to throw a spear and with a rather overscale arrow in the eye. 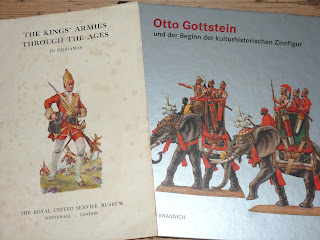 Above, the catalogue for the 1937 exhibition at the Royal United Services Museum in Whitehall together with the biography of Otto Gottstein and his collection (published by edition Krannich 2000, ISBN 3-933124-06-9, text mostly in German) well worth a read, Gottstein was the President of the British Model Soldier Society and also financed Roy Selwyn-Smiths first venture, Selwyn Miniatures, which went on to become the Britains Knights of Agincourt series. 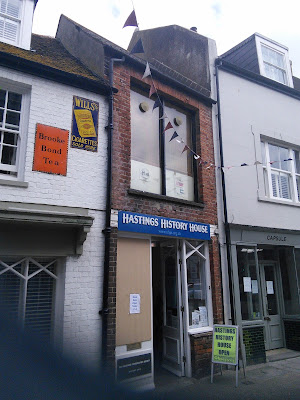 If you happen to be in Hastings do pop into Hastings History House at 21 Courthouse Street, it's the current home of this venerable old diorama as well as the HQ of Old Hastings Preservation Society.  I started to write this post some time ago then realised that as today is the anniversary of the Battle of Hastings, I really ought to get it posted.

Postscript.
After the RUSI Museum exhibition was broken up, the 15 dioramas were distributed to new homes far and wide, mostly military museums in the UK, one went to the Royal Military School of Music at Kneller Hall and has subsequently been lost, while no less than four went to the Glenbow Museum in Calgary, Canada - someone in Canada please tell us that they are still there!