Ancient Wargame - how does that work then?

Some years ago I came to the conclusion that painting 54mm Napoleonics and ACW for wargaming was a bit like cleaning out the Augean stables, the mountain of plastic never diminished and my hobby had become a chore instead of a pleasure.  To break the cycle I began searching for prepainted figures and bought up a clearance lot of the Timpo Romans made by Toyway (not to be confused with the original Timpo Swoppet Romans which would have required a remortgage on the house), these chaps are made of PVC so the weapons are a bit wangy and they plug in to a truly dreadful base which looks like a big orange dome.  Neither problem is insurmountable, dip the weapons in boiling water then straighten them and run under the cold tap - all sorted.  For the bases I reverted to my old favourite the tu'penny bit, the figures being PVC they stick to metal like barnacles on a boat hull, okay it's a bit of faffing about but it's not as tedious as having to paint 100 figures. 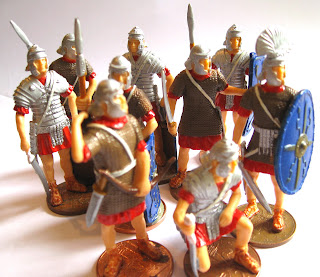 The Toyway/Timpo Romans, well detailed and nicely animated, I think the armour is quite accurate too.
I have never played an ancient wargame (not even with the Airfix figures I had as a lad) and my knowledge of the period extends little further than the Romans/Britons and Greeks/Persians but I have flicked through various Great Battles of ... and Great Commanders of .... type books so I know I am missing a trick and with that in mind I reached for the copy of Xenophon's "The Persian Expedition", which has been yellowing on my bookshelf these past two decades and headed for the local pub. 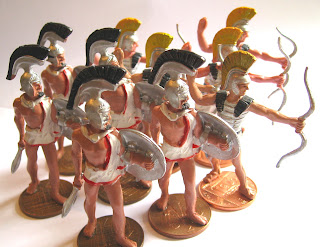 Britains Trojans, not the nice early Herald series figures but the later Hong Kong versions made of PVC (so I have no qualms about mounting them on new bases).  Will they pass muster as Carthaginians?  They'll have to because I haven't got anything else!
Xenophon's history of the Ten Thousand has provided me numerous scenarios which require few cavalry and no chariots or elephants, which is a good place to start as I only have infantry at the moment.  I have a reasonable number of Britains Trojans which will get the tu'penny treatment and be pressed into service as Carthaginians, supplemented by various African natives as ........ well Africans.
Rules?
I recently happened across some old copies of "The Bulletin" the magazine of the British Model Soldier Society but they were priced ridiculously high so I just bought one issue, July 1956 - the month I was born.  Flicking through I found a set of very basic Ancient/Medieval wargame rules written by a T L Bath, which appeared to be written for 54mm figures.  Enquiries on the Old School Wargames Yahoo Group showed that they were the first known rules written by Tony Bath who had founded the Society of Ancients and they were designed to be played with 30mm flat figures.
to be continued
Posted by Brian Carrick at 16:37 10 comments:

For the past 12 months, Mrs C and I have been walking the dog for an elderly neighbour who has been unwell, this morning we decided to walk him along the river where we came across this MTB gently bobbing against the quay at Eel Pie Island. 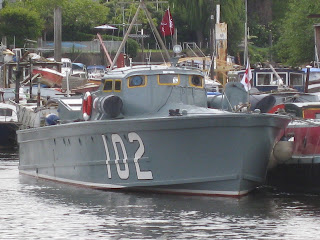 To be precise it's the Vosper Motor Torpedo Boat 102, an experimental craft launched in 1937 and just over a week ago it participated in the Jubilee River Pageant.

When I was a schoolboy I was an avid reader of the Victor comic and one of my favourite series was called "Under Two Flags" (not to be confused with the Foreign Legion novel by Ouida) which was about a Royal Navy squadron consisting of a MTB and a captured German E Boat which constantly surprised and outwitted old Jerry, I've always had a bit of a thing for MTB's since then.

It's always fun to discover something unexpectedly! 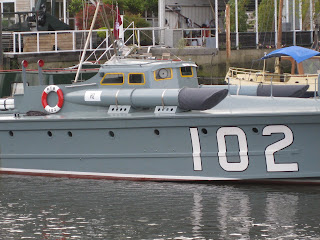 What really struck me was how small the torpedo tubes looked, perhaps because it was an experimental craft?
Posted by Brian Carrick at 11:27 2 comments:

Email ThisBlogThis!Share to TwitterShare to FacebookShare to Pinterest
Labels: This and That
Newer Posts Older Posts Home
Subscribe to: Posts (Atom)