What a great phrase! it's the title of a scenario from "One Hour Wargames" written by Neil Thomas, which Santa brought me for Christmas, and it's the action which AM and I played yesterday using his rather sumptuously painted English Civil War figures. 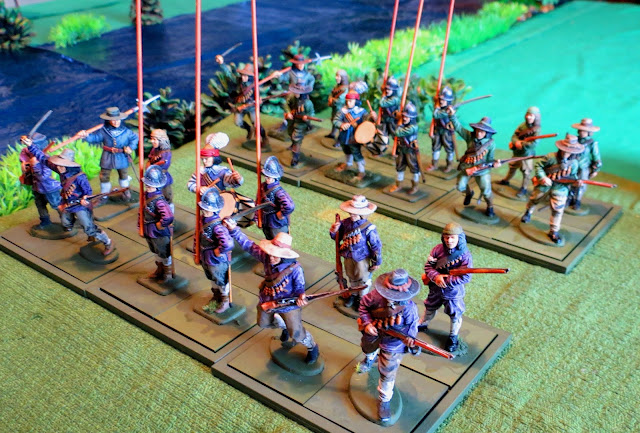 The opening positions see the forces of Parliament above occupying a contested hill while the Royalists approach from the north.  The winner will be the side that either holds the hill at the end of fifteen turns, or eliminates their enemy, whichever comes first. 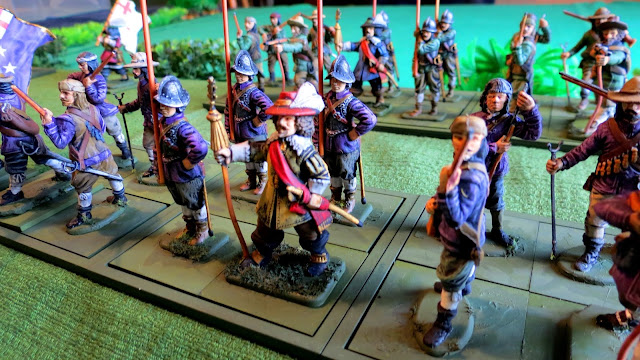 The figures are made by "A Call to Arms" and the rather wangy plastic pikes that they come with have been replaced with brass rod. 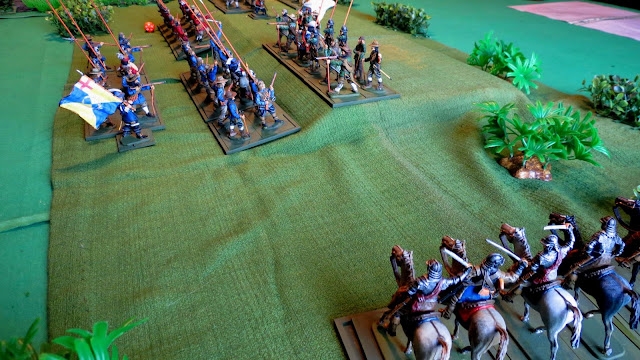 Parliament fields six units but are led by a poor commander (hence shambolic command) who exhibits his incompetence by being allowed to only move two units per turn. The Royalists have only four units but are more ably led and can move all units each turn. A nice, simple mechanism to distinguish variability between commanders, I thought. 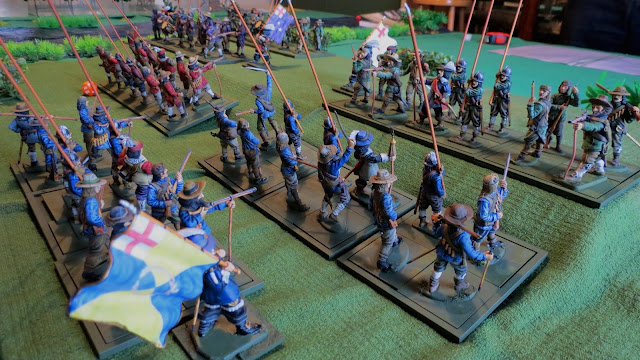 The Royalist infantry use their greater mobility in a frontal assault while their horse move around the flank, massed volley firing blows away a Parliamentary Regiment but the Royalists begin to run short on ammunition! 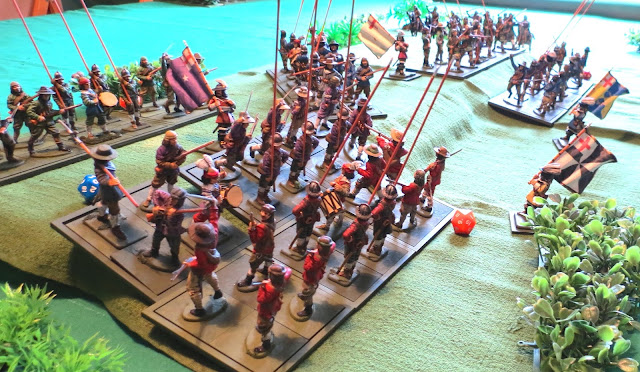 As the ammunition runs out the royalists charge home but are greatly weakened by counter volley fire and hand to hand fighting.  The twenty sided dice, seen behind each unit were used to keep track of the casualties it had suffered. 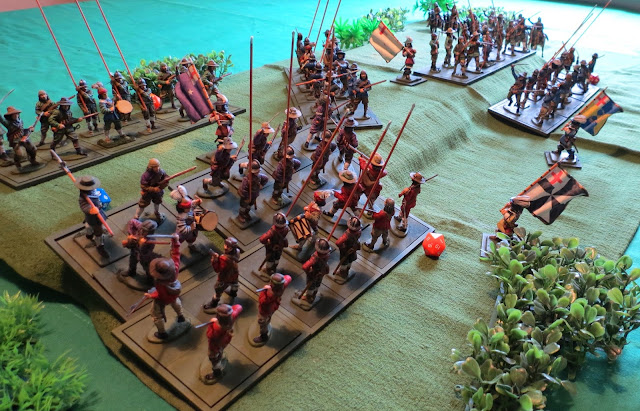 During the first half it looked as if my Royalists had the game in the bag but then attrition began to take it's toll and with fresh Parliamentary Regiments moving up they could no longer take the pressure, and it was all over.  Victory to the Parliamentarians.

Each scenario in the book is based on an actual battle so you can look it up afterwards and see what should have happened, in this case the course of history was changed!  The game took us about two and a half hours to play but could probably be done in about half that time had we been more acquainted with the rules and not spent so much time gassing on about toy soldier stuff.

We played on an area 6' x 6' and doubled the movement/firing distances, the rules are quick and easy to pick up and I thought they were ideal for skirmish games with 54mm figures.  I liked their simplicity and the fact that much the same structure, with just subtle changes, was used for every historical period, which is ideal if you tend to flit from age to age as we do.

The rules have come in for some criticism of over simplicity and I can see how they wouldn't sit well with some people but I felt they were fine for giving the feel of a period without tying one down into the straightjacket of too much detail.  The only thing I wasn't too keen on was trying to keep track of the casualties/hits for each unit, we attached a D20 to each unit to record this, which worked well enough but was a bit fiddly and would be rather onerous on a larger sized battle (to which I aspire)  and I'm sure we can find a better way to tackle this.