Time for a post on proper toy soldiers!  Last week a large collection of toy soldiers went up for sale at the Sheffield Auction Gallery, I didn't get along to it myself but I hear from those who did that the bidding was brisk.  Surprise of the show must be the prices achieved for boxes of Airfix figures: 17 assorted boxes of 1/32 made £220 against Estimate (E) £30/50 while 17 assorted boxes of HO/OO made £320 (E) £60/100, That's about £13 a box for 54mm, which seems reasonable and about £19 a box for 20mm, which doesn't, or am I out of touch?

Anyway here are pics of some of the more interesting lots, or at least the ones that I thought were.  As always, click the picture to enlarge, click again it's even bigger, all photos courtesy of Sheffield Auction Gallery: 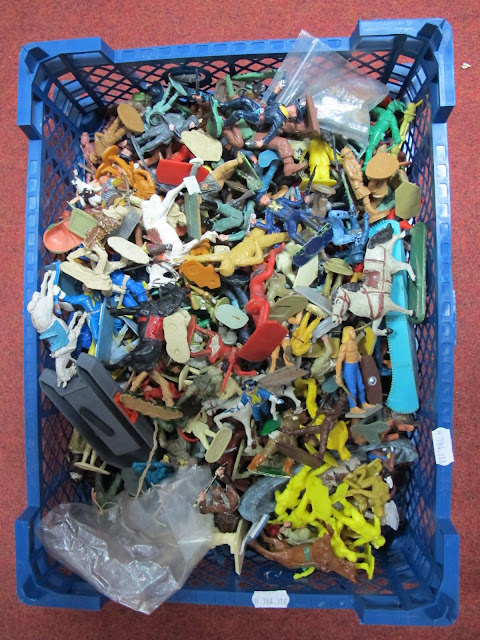 One of the earlier lots typical of those being offered this one went for £35 (E) £30/50, many similar lots were (E) £20/30 and sold in the range of £30/40.  I'm showcasing this particular lot because it has some interesting Continental figures and I noticed several Malleable Mouldings in there. Most of the other mixed lots of this size were less interesting and generally sold above estimate. 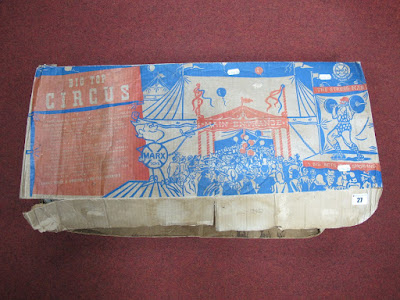 This Marx Big Top Circus made in Swansea reached £28 (E) £20/30, the box is tatty but the tinplate tent was there without any figures.  How much would this have sold for in the USA? No doubt someone will tell us, there isn't the same interest in Marx tinplate in the UK and several other lots went for prices that our American colleagues haven't seen in decades. 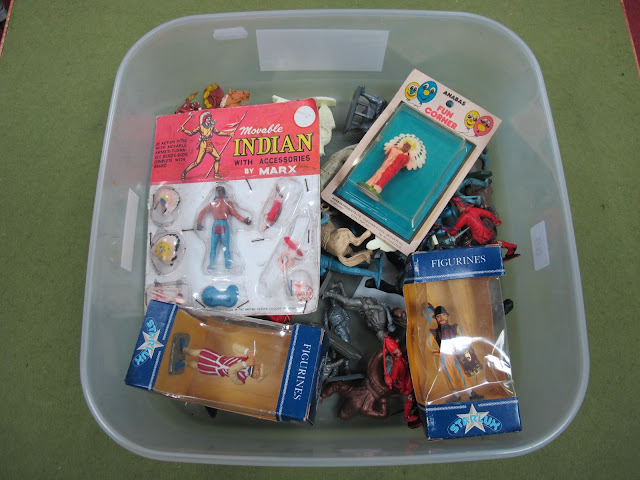 This shot has a good view of the Marx Movable Indian with all his accessories, issued about 1967, I remember seeing them in the shops and they have remained a firm favourite ever since. Sold £22 (E) £20/30. 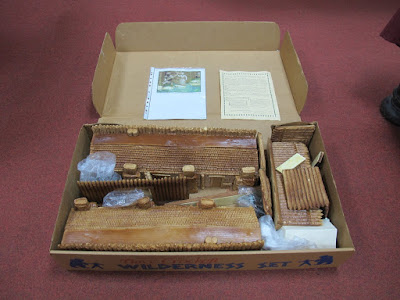 The Barzo Davy Crockett Playset, of recent manufacture in the style of the old Marx playsets it is now out of production and eagerly sought after in the USA. Sold £40 (E) £20/40 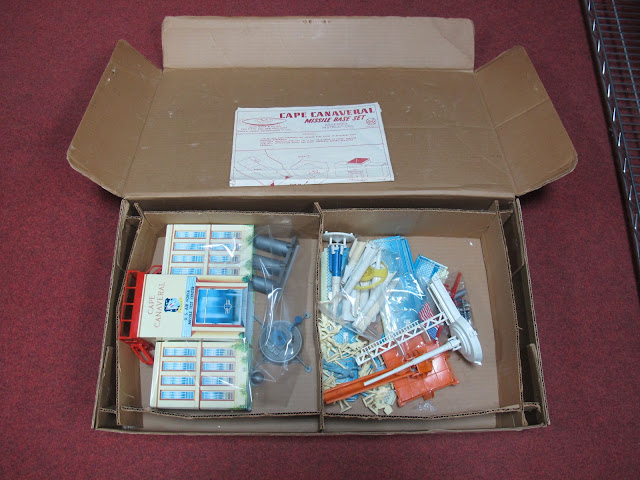 An original Marx Cape Canaveral playset, I'm not really interested in anything non military but included this because we didn't get these playsets over here in Europe during the 1950s and 60s so a lot of people won't be familiar with them and this is quite a good example. Sold £70 (E) £50/80 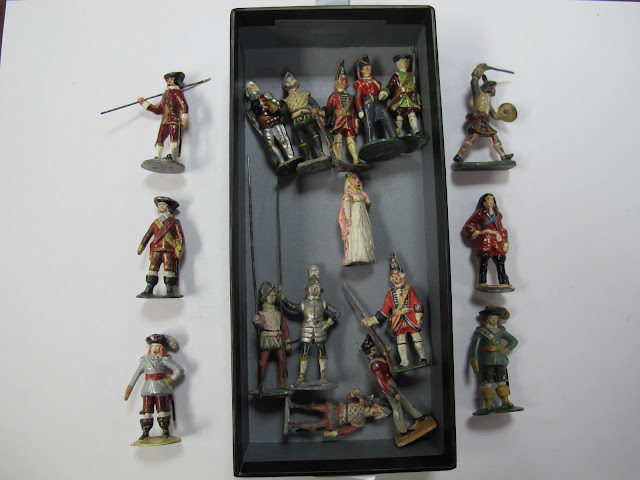 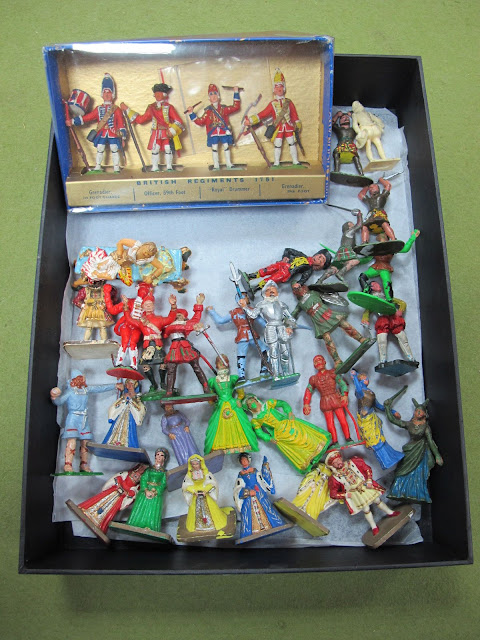 A good selection of rareish plastics: an original box of Cavendish "British Regiments 1751" made for the tourist trade along with Henry VIII and his numerous wives, an unpainted SEGOM figure from France, Monarch Highlanders, several pieces from the Charbens Francis Drake set, 2 from the Gemodels Humpty Dumpty set and various Cherilea/Crescent oddments. Overall a great lot. Sold £120 (E) £60/80 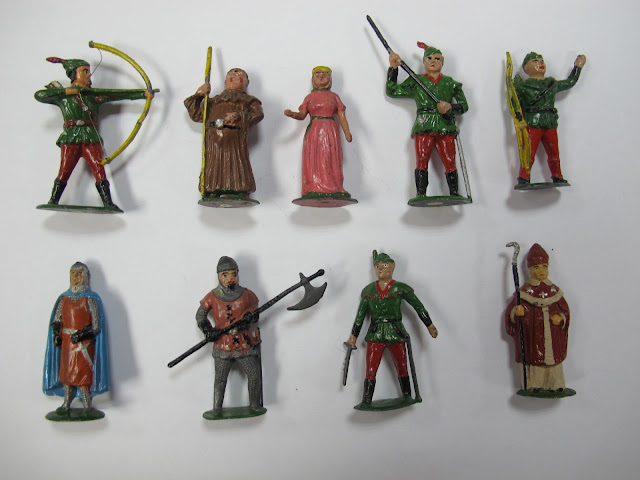 A complete set of the Benbros hollowcast Robin Hood set, nothing special about it but it's a good pic of a very nice set.  I have them in plastic....what's that you say...but Benbros never made them in plastic! True they didn't but Giles Brown of Dorset Soldiers acquired the original moulds and cast a few sets when he was experimenting with plastics. Sold £110 (E) £25/40 (I did say it was a nice set!) 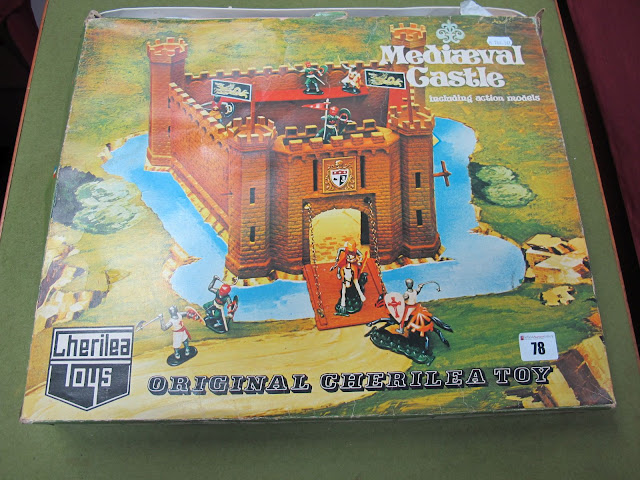 A nice pic of the box art for the Cherilea Medieval Castle, notice the strange squared off triangle shape of the Keep, I could never figure out why they did that? Also the Cherilea Toys logo, the late version after the company had been taken over by Sharna Ware and the gawky Hong Kong knockoffs of Timpo swoppet knights. The castle was made to go with their 65mm knights so why didn't they use them in the picture? Sold £28 (E) £20/40 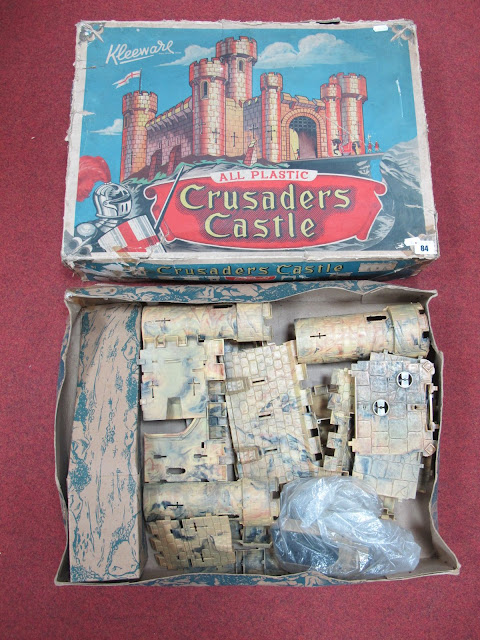 There's nothing special about the Kleeware castle, it turns up all the time and was reissued by Timpo at one point but again it's a nice pic of the original box art. Sold £25 (E) £25/40 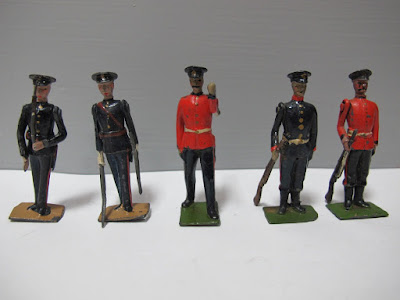 Britains hollowcast Territorial Army, these five unremarkable figures sold for £440 (E) £20/40 so they must have something going for them! 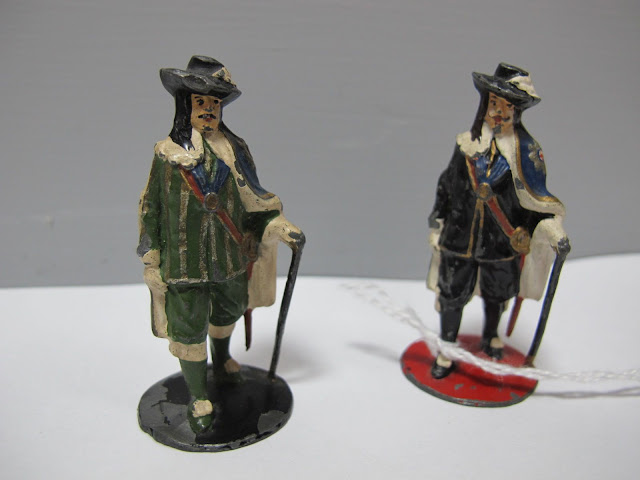 Two figures of Charles II by Courtney, again they aren't really toy soldiers, having been made for the adult collectors market, but they do have a certain vintage and you don't see them very often so it's nice to be able to showcase such a good shot. Sold £80 (E) £20/40 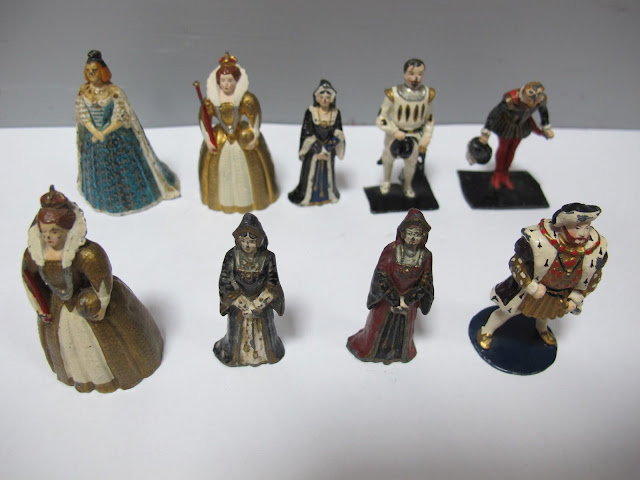 More Courtney's, this time 2 x Elizabeth I together with Henry VIII and three of those unfortunate spouses, Sir Francis Drake resplendent in white, someone bowing that I can't make out and one other by Vertunni. Sold £160 (E) £80/100 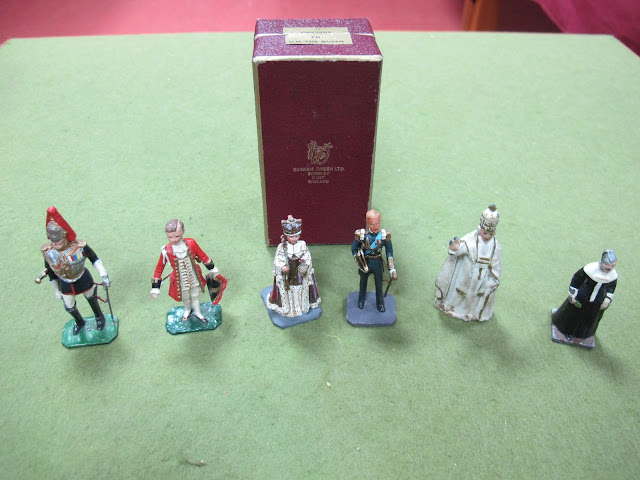 Finally a group of 5 figures based on the Coronation of HM Queen Elizabeth II by Graham Farish, the sixth figure on the extreme right (which has been misdescribed in the catalogue) is Marie de la Queillerie made by SAE (Swedish African Engineers) and was given given away free with petrol in South Africa

There was lots of other good stuff, not least of which was a Lone Star Dick Turpin which sold for a respectable £75 (E) £20/40 and you can view more of them here Sheffield Auction Gallery I don't know how long they keep these results up for so take a look soon if you're interested.  Having worked in the auction industry I can tell you that on average a general art sale will expect to get a sell through rate of about 50%, specialist sales like this tend to get a much better hit rate, looking through the results I could only find three lots that didn't sell out of 320 in the toy soldier section, that's over 99%.  A stonking good result and food for thought for all those Jonah's out there who delight in telling us that the hobby is dying.

I have always been drawn to car boot sales, charity, junk and aquarium shops, in fact anywhere that might offer something which can be used to enhance my toy soldiers. Over the years I've accumulated a whole pile of what might loosely be called crap which "might be useful one day".  I suspect I'm not alone in this, at least I do hope I'm not.  This is the sort of stuff I mean: 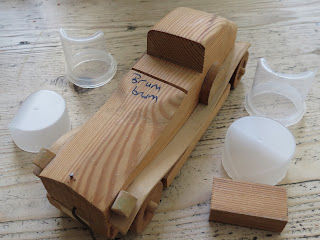 A wooden car, some sort of tourist tat but the right size for 54mm figures turned up in a charity (thrift) shop for £2 (yes I know I was robbed but it is for charity!).  The transparent spheres are lids from toothpaste dispensers and the block of wood is, well........a block of wood. 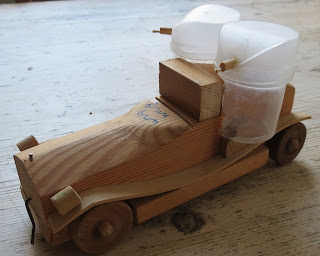 The champhered front planes of these toothpaste tube lids just screamed out to be used as turrets for an armoured car, the MGs are made from bits of chopstick from the Chinese takeaway and the pointy ends from a cocktail stick.  Sometimes an idea just comes together from out of the blue, as I become increasingly aware of getting older I've started to make a list of these projects and I'm working my way through them. A major stumbling block is my own lack of confidence that an idea will work. 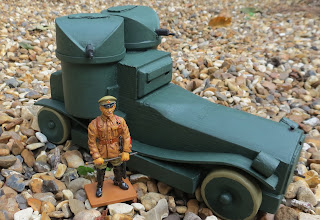 The almost finished item, posed with a DeAgostini figure of a Russian Company Commander 1919, it maybe needs a lighter green paint scheme, some Cyrillic graffiti and a big red flag.  It's only a bit of fun and it's very robust so perfect for wargaming in the garden.