A couple of weeks ago I went along to the March 2014 London Toy Soldier Show, I would have to say that since the move to the new venue this show has been in something of a gentle decline.  To spruce things up a bit the organisers have decided that the December 2014 show will be a two day event, the existing Toy Soldier Show to be held on the Saturday and on Sunday the venue hosts a modelling competition and exhibition. 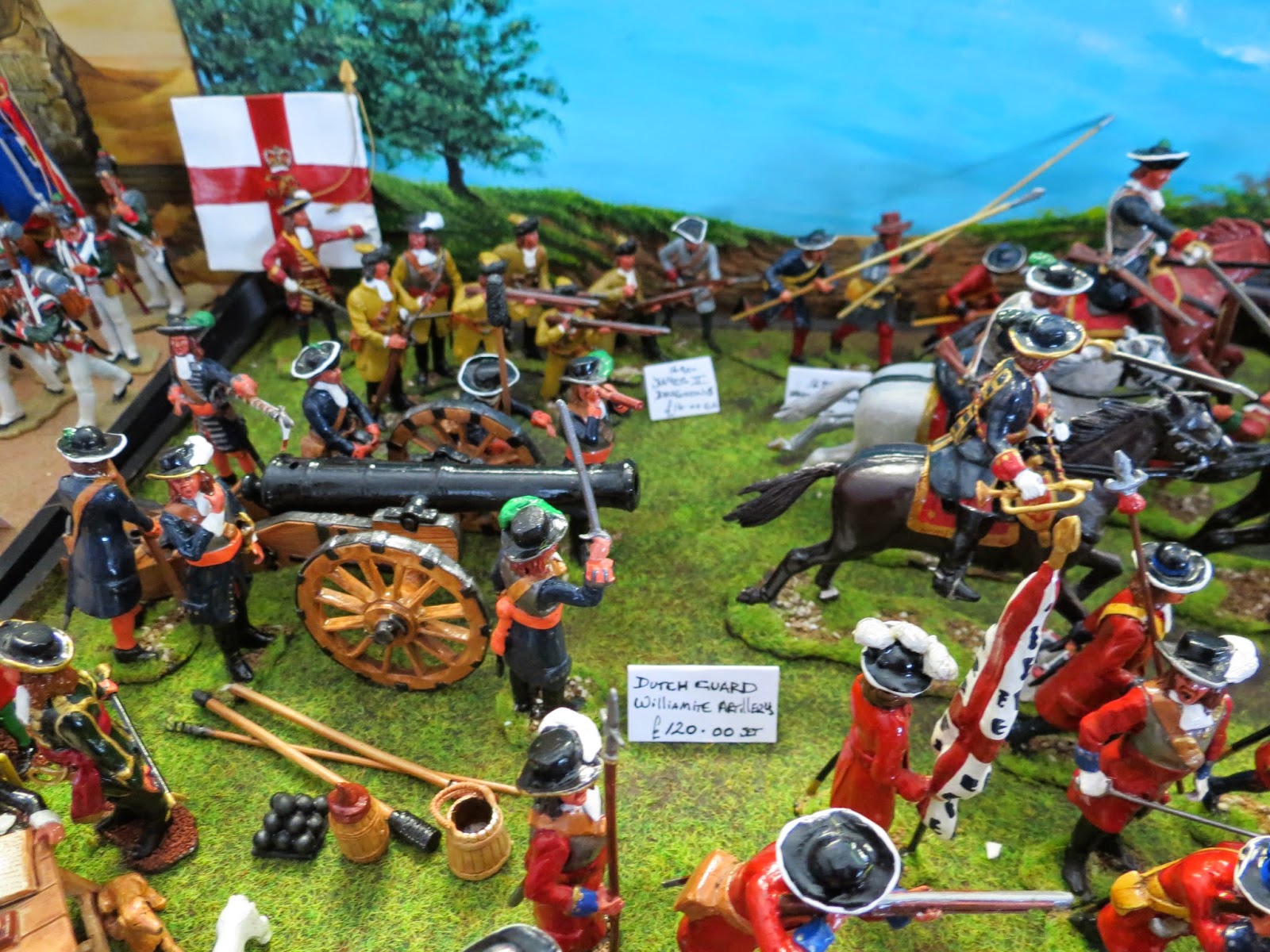 One manufacturer which has been around for a long time is Alexander's Toy Soldiers, who have generally concentrated on making white metal figures of the Napoleonic Wars.  I've tended to bypass their stand in recent years because I've had a bit of a downer on that period but as things were a bit quiet I took a closer look and I was very glad that I did. 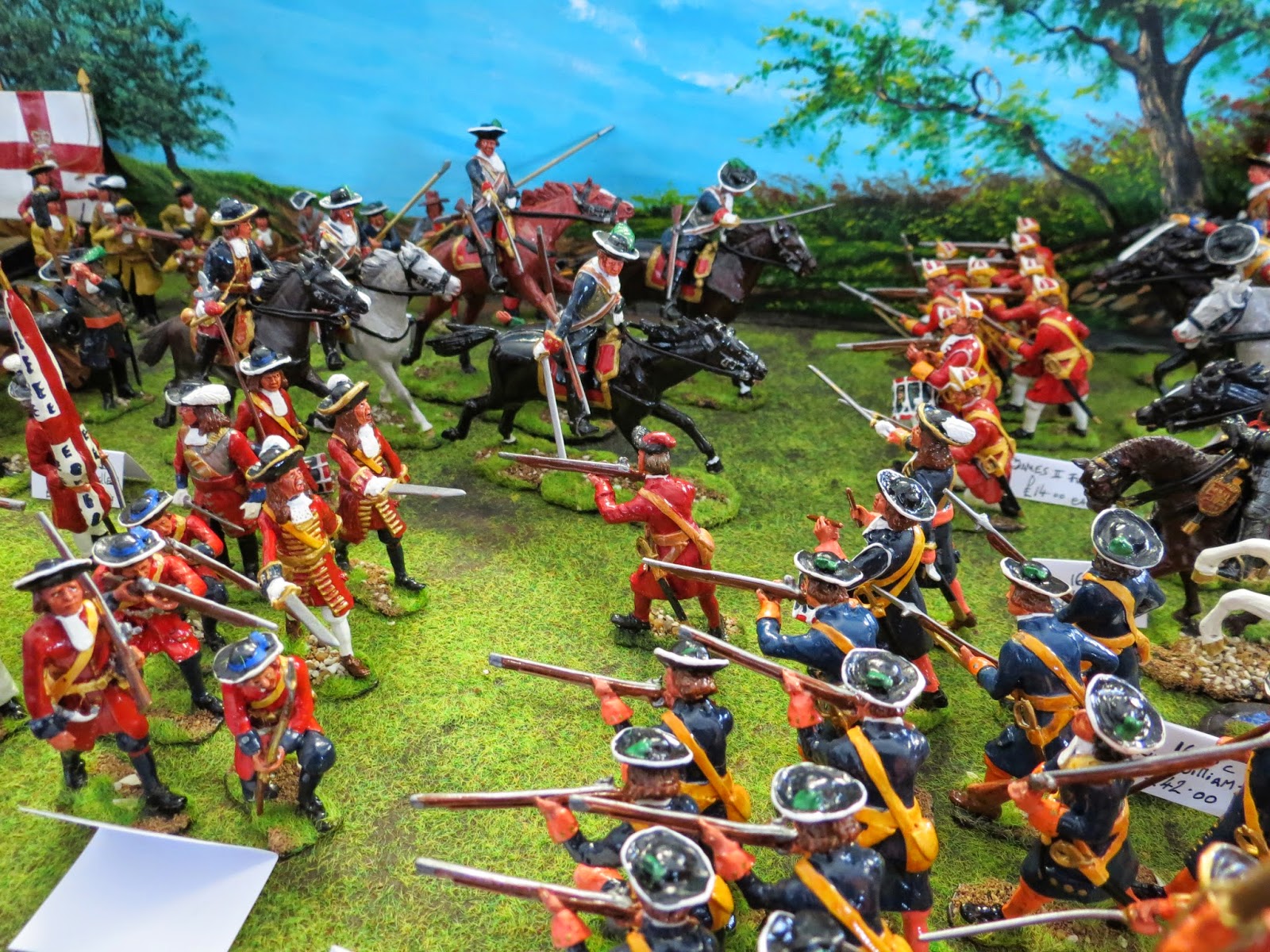 They have a small but rather delightful range of figures depicting the Williamite Wars which just happens to be my personal historical plat du jour.  I have been lead down this dimly lit road in the quest for Jacobitism, the well trod path lead off towards Scotland but a narrow lesser known track took me towards Ireland, where I have greater familial associations, and brought me into the sunlight and the gleaming vista that is..... The League of Augsburg blog. 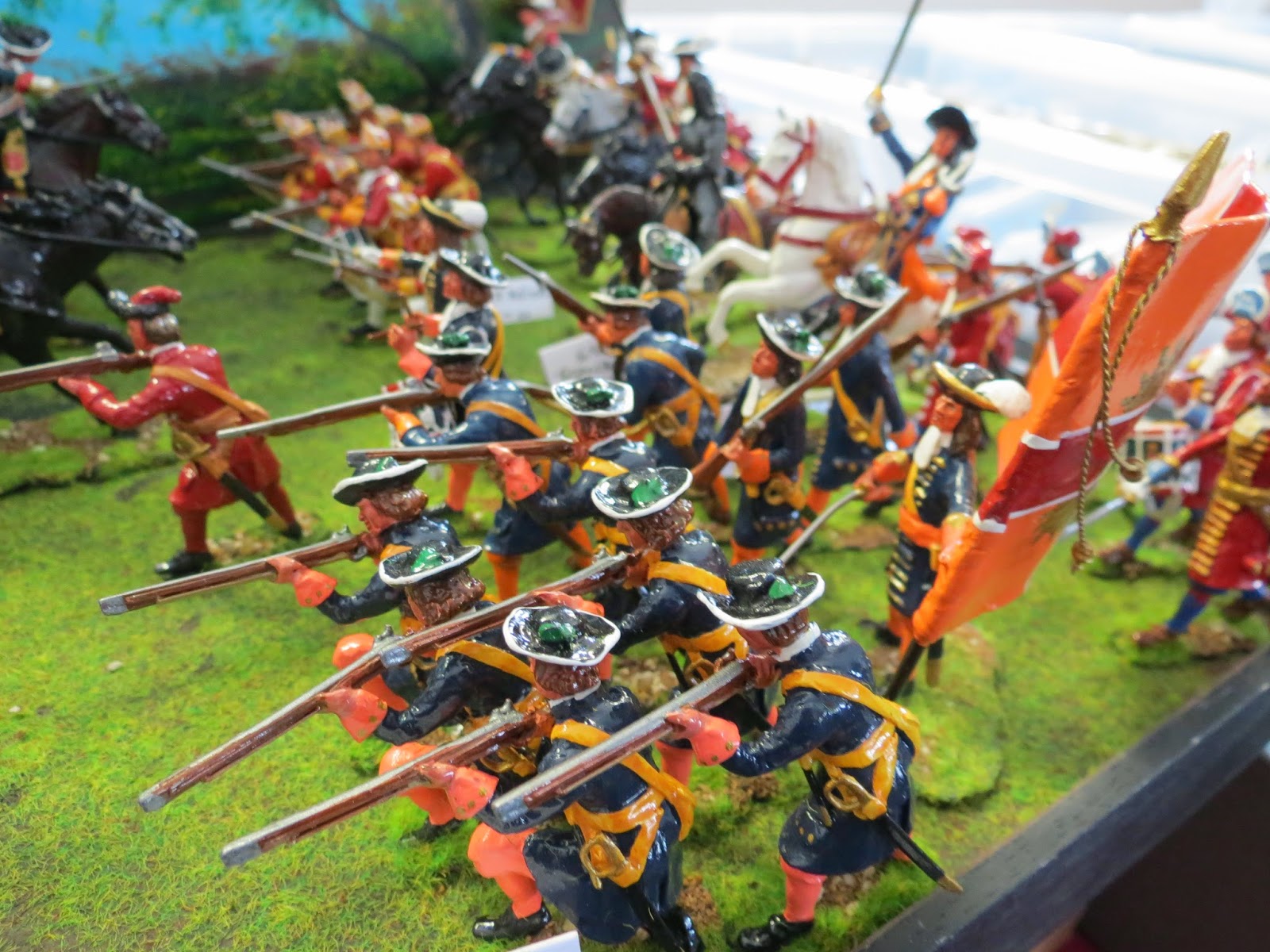 This post is pure indulgence on my part but I'm confident dear reader, that you will agree these figures are very easy on the eye.  Did I buy any? er.......well no.  But that's because I'm already in the process of converting some figures into Dutch chaps like the ones seen above, so expect to see a bit more of this period here at some point in the future. 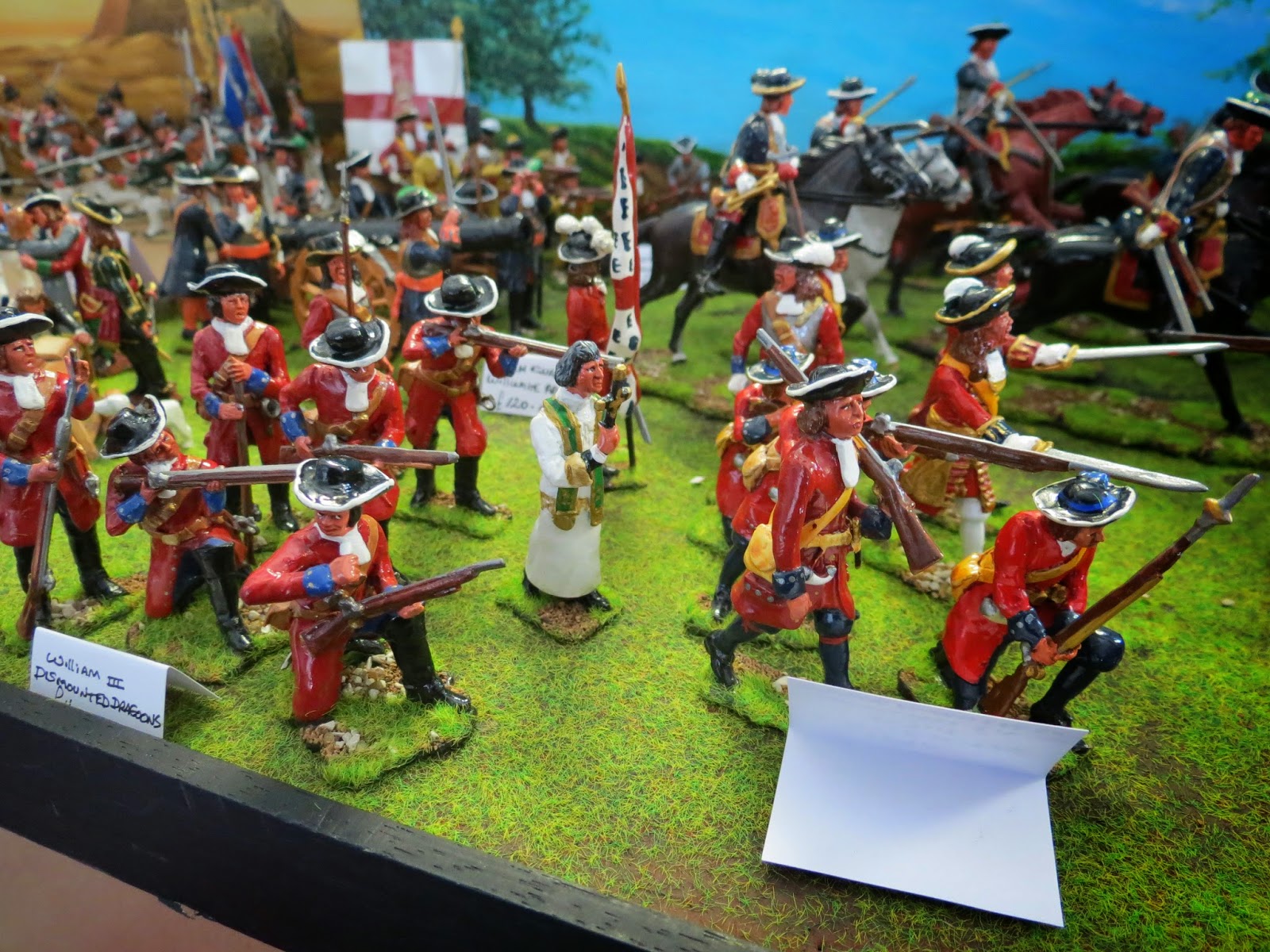 However I didn't emerge entirely unscathed financially from the ATS stand as they were selling a range of spare parts and I managed to pick up some heads in mirleton caps which I have been searching for to make some Seven Years War Hussars........Hurrah!

With the recent upturn in the weather we had been eagerly awaiting our first outdoor Funny Little Wars game of the season, the plan was to run an amphibious landing, set during the "Herring War" between Norway and Denmark, with a fortress assault in the style of Port Arthur.  Alas, the best laid plans of mice and men etc..... the weather turned, rain stopped play and the game was taken inside: 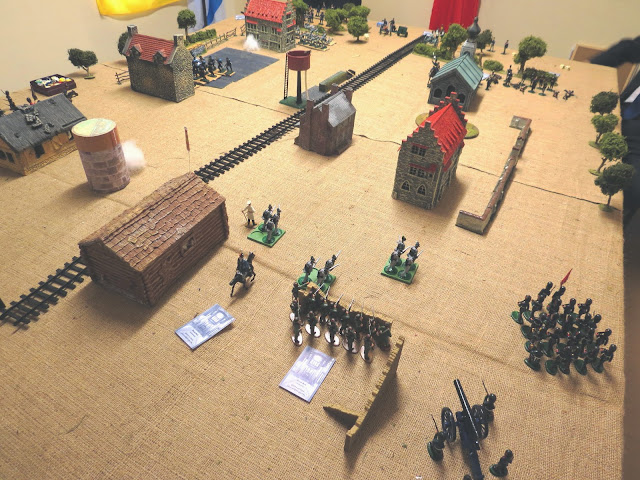 The layout of the table after the first few moves had been made, The Norse have occupied some of the houses and dug in along the tree line at the far end while the Danes tentatively approach the town.

The plan now was to try out some rules for fighting in built up areas, the scenario was to occupy an inland town with the objective of taking the strategically important coaling station.  AM and JW lead the Norse while PW and I played the Danes. 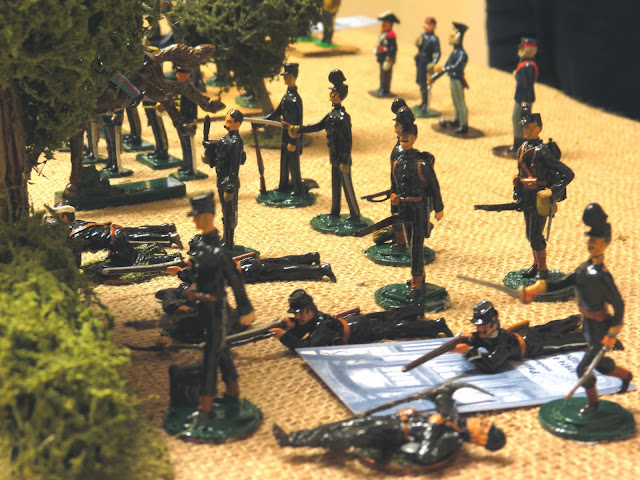 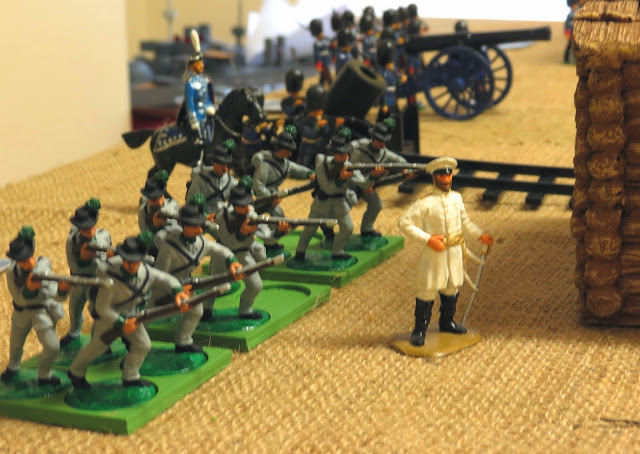 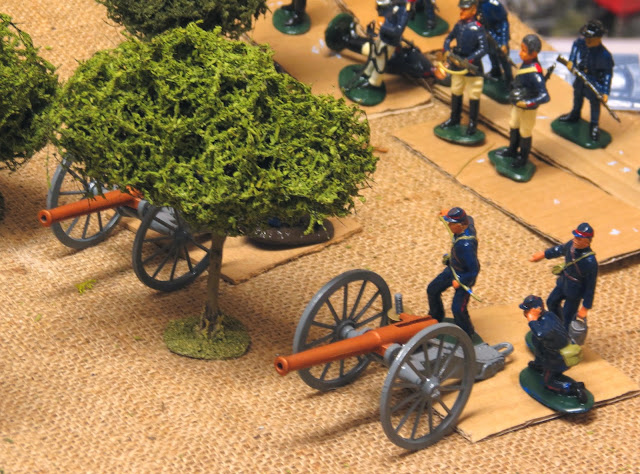 The artillery might have dominated the game if not for the erratic marksmanship displayed by both sides! 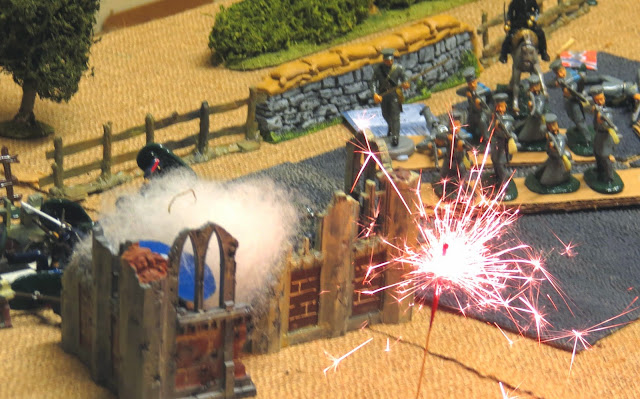 A shell bursts over one of the houses which has already been pounded to rubble.

Lessons learnt: troops sheltering in houses attract heavy bombardment and the concentration of so many men leads to high casualty rates, by contrast the resulting piles of rubble provide a bulwark that can subsequently be easily defended.  A fast furious game played with about 100 infantry and three guns a side it turned into a real slugfest with lots of hand to hand melee among the ruins, great fun and all done in about three hours.

I'll leave the reader to identify the figures used, the Danish expeditionary force was cobbled together from various units in the spirit of Put Everything on the Table.