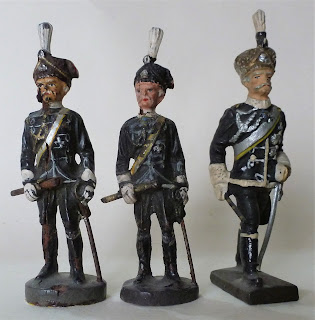 The first one on the right was made by Elastolin and is showing some deterioration where the wire armature it is built around is rusting and causing the composite material to crack.  Middle also by Elastolin but 2nd quality late production, you can see it is smaller and the paint quality not so good.  On the right is the version made by Lineol which I think is by far the best of the three.
Posted by Brian Carrick at 10:24 6 comments:

A few days ago the latest issue of Figuren Magazine landed on the mat: 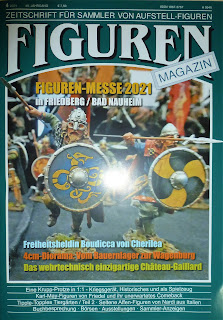 Posted by Brian Carrick at 14:07 No comments:

Clay Soldiers - model soldiers and wargaming from the Ukraine

I saved this link some time ago, so must have thought it was worth sharing, but I can't remember what it's about so I decided to just post it anyway!

Have just watched it again and it's actually quite good, well worth 15 minutes of your time anyway. Enjoy!
Posted by Brian Carrick at 09:09 10 comments:

In the closing weeks of last year Anthony and I decided to take his 54mm Battle of Metauro game for another spin, originally this was a board game made in Spain by Rojas y Malaret, Anthony took the original board and had it blown up as a gaming mat for 54mm toy soldiers, here's how the game works: (click on the images to enlarge them) 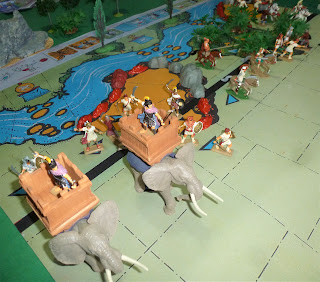 With the German (Hausser) version of the game you could purchase additional extension packs to increase both the number of figures on the board and also the variety of troop types, such as archers, light infantry and Gallic allies.  Accordingly, Anthony has been building up his collection of DSG Roman and Carthaginian forces in line with the expansion packs available for the original game. 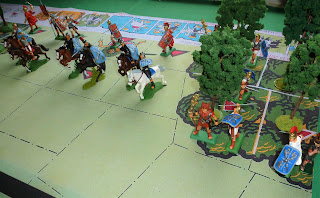 The game opens with troops being placed on the squares with coloured triangles (each individual figure represents a unit), each square can contain 3 infantry, 1 infantry and 1 cavalry, 2 cavalry or 1 elephant.  You can have less figures on a square but you can't exceed these numbers per square, this can have an important impact on movement and combat later in the game. 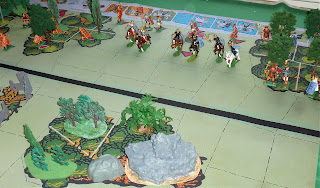 Movement distances are 1 square for infantry, 2 for elephants and 3 for cavalry.  Woods and ruins provide cover and can only be entered by infantry.  Squares with rocks are an obstacle, they can't be entered or passed over by any troop types. Infantry in cover get a bonus in combat. 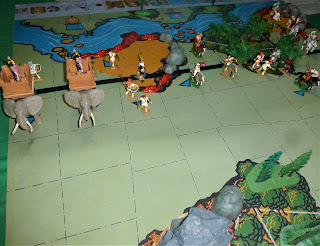 A unit moving into a square adjacent to a enemy must attack, combat takes place between individual units and the attacking player decides the order of combat, both sides roll a D6 to decide the outcome.  Highest score wins, 1, 2 or 3 have no effect, 4 or 5 cause the loser to retreat 1 square (2 squares for elephants), 6 is a kill and the losing unit is removed from he board.  If both sides get the same score (including bonus modifiers, see below) there is no effect.  A unit can only take part in combat once in each move turn.
There is no bonus for the attacker but infantry in cover get a +1 added to their score.  Cavalry always get a +1 in combat while elephants get a +2.  Only the Carthaginians have elephants (obviously) but to even things up the Romans get 3 designated figures who can attack and force the elephants to retire. 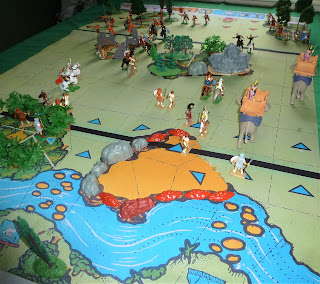 Rivers can only be crossed at the fords indicated by stones, the central rocky plateau (shown here in orange) counts as cover for infantry, the rocks on three sides around it are impassable.
After combat, a losing unit forced to retire must move into the square directly behind it (elephants retire 2 squares), subject to that square being accessible to the retreating unit type and having enough space to accommodate them i.e. a cavalry unit can't retire into woods or into a square containing 3 infantry, 2 cavalry or 1 elephant, but can retire if the square is empty, has 1 infantry or 1 cavalry on it already.  If the losing unit cannot retire onto the square behind, it is destroyed.  This can be particularly problematic with elephants, you need to keep plenty of retiring space clear behind them! 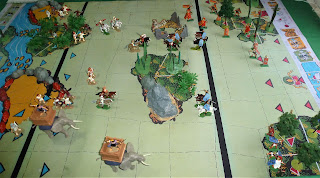 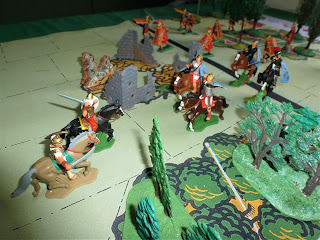 The game is won by killing your opponent's General or occupying both of the camp squares on their baseline.
Simple, quick play rules, easy to learn but with subtleties that can cause a few unpleasant surprises, the game system is very well suited for use with 54mm toy soldiers and increasing the number of units in play adds greatly to both the visual impact and tactical opportunities.
In our previous game we tended to try and occupy the areas of cover which dominate the centre of the board in order to acquire the +1 combat bonus for infantry and it became a bit of a slugfest there with the mounted units dancing around on the periphery.  In the game pictured above the Carthaginians allowed the Roman infantry to occupy the ruins in strength and left cavalry units hovering around to block any attempted breakout, effectively turning the ruins into a POW camp.
Posted by Brian Carrick at 09:30 10 comments:

Honved infantry for the Risorgimento

Or at least my take on them. I've been sitting on a pile of Airfix Napoleonic French Line infantry and Grenadiers which I've been steadily trying to find other uses for, I got bored with painting French uniforms a long time ago! 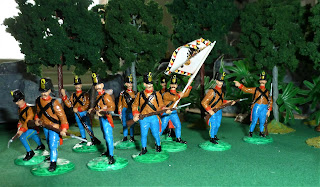 In this case a unit of them are joining my Risorgimento project as Austrian Honved infantry from the  1840s.  Anyone conversant with the period will instantly recognise that the uniforms aren't quite right for such troops, but at least the colours are, more or less, and that's good enough for me. 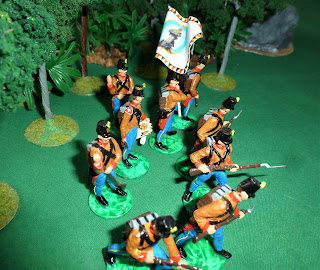 A simple conversion, just a head change for a metal Austrian shako from Dorset Model Soldiers and a paint job, mounted on metal washers for stability and basing uniformity, the standard is printed from the Warflags website. 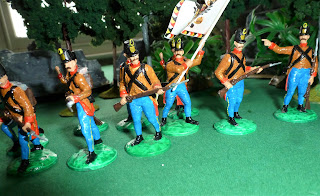 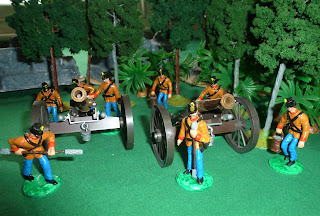 While I had the Dorset heads and the relevant paints out I added a couple of Austrian Artillery crews to the mix, these made from BMC American Civil War figures.
Posted by Brian Carrick at 14:57 6 comments:

This is a conversion of an old Britains hollowcast toy Hussar into.... well another Hussar, but who or which Regiment does he represent? 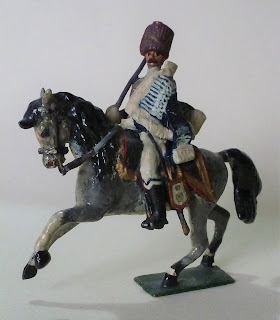 The horse's forelock, mane and tail have been built up with solder rather than a modelling clay, which we would use today, also a pelisse has been added to the rider from lead sheet.  The horse has been painted in gloss while the rider and saddle are in matt paint. 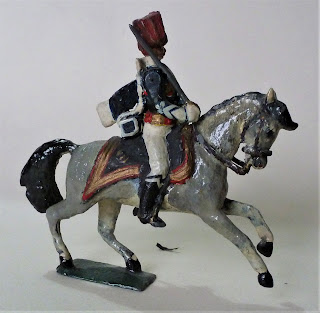 On the tail of the shabraque I can just make out VII, and it looks like his busby has been heightened to appear earlier than the Victorian style on the original toy, also there is a small hole on the top where a plume would once have been. Other additions are the stirrups and valise visible in this picture. 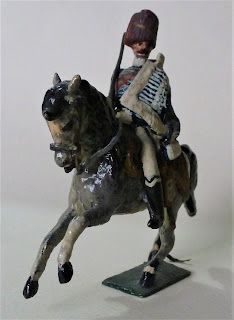 Someone has invested a lot of time and skill into making him and I'd love to know who that was, it's very much the sort of thing that members of the BMSS (British Model Soldier Society) used to make in the 1950's and 60's so I'll be putting these pics up on Facebook in the hope that one of the senior members of the hobby might recognise the handiwork and even be able to tell me who made him.
Posted by Brian Carrick at 12:13 6 comments:

The only painted metal I managed to pick up at the London Show last month were these two examples of artillerymen from the short lived HM of BG Tudor World range, the chipped paint might need a bit of a touch up! 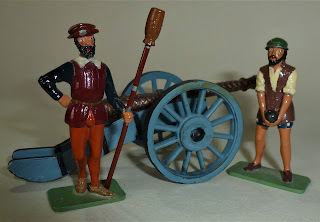 The gun is borrowed from somewhere else (Sikh artillery) but looks okay with these Tudor chaps, they will join the Monarch, Barzo and Chintoys Conquistadors to beef up the Wars of Religion project which is very slowly taking shape here.  Rather neat little figures I think and an unusual subject. 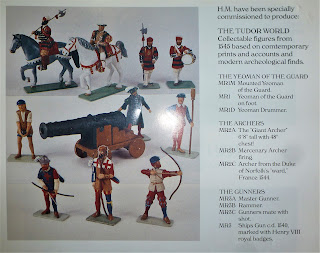 This is the full set of Tudor figures from the HM of GB catalogue, the mounted figure of Henry VIII is really quite fine and I wouldn't mind getting a few more of these.  The firm mostly made British Colonial figures back around 1990 and quite nice they were too, particularly a mule gun battery, they exhibited for several years at the Olympia Toy Trade Fair in London but despite this they never really took off with collectors.
Posted by Brian Carrick at 11:30 10 comments:

This mounted knight stands 140mm from base to top of plume and was part of an early set of medieval figures produced in the 1920's by Lineol.  Made from the usual "sawdust and glue" composition material it was part of a jousting tournament, with six foot figures representing members of the Court and attendants plus two mounted knights with two different horses.  The other knight had a couched lance on a rearing horse, I once had the other horse and it was one of the most spectacular pieces I've ever owned but I let it go to a German dealer......... and have regretted that ever since! 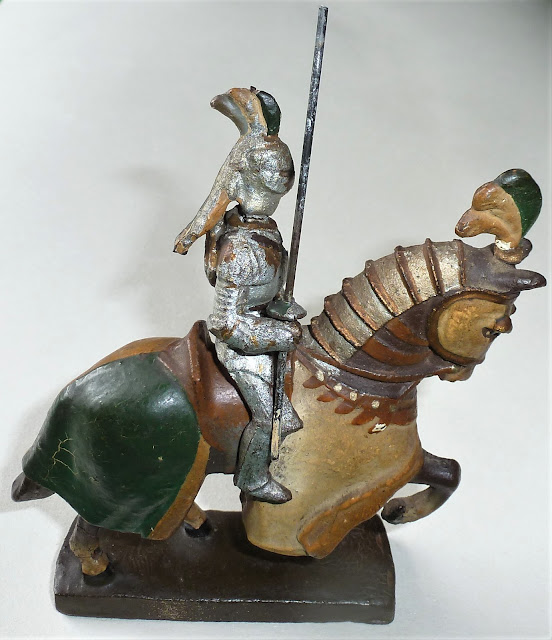 The horse trappings are parti-coloured green and white but this one has clearly collected a lot of grime over the past hundred years. I really should give him a gentle clean but I rather like the aged patina and if I removed it I really couldn't wait around another hundred years for it to come back! 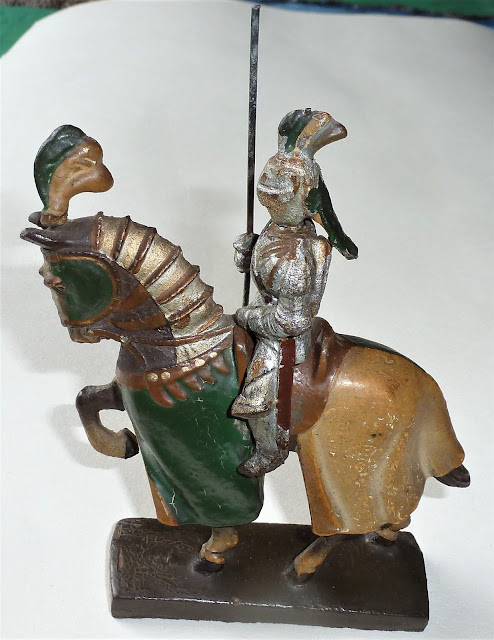 Back in December I went along to the London Toy Soldier Show, I have to admit I was checking each day that it wouldn't be cancelled at the last minute, but they stuck to their guns and with due social distancing it went ahead.

One of the highlights for me was this rather nice model of the USS San Pueblo, I didn't catch the name of the maker but no doubt it will come to light at some point, in the meantime I thought I'd share it anyway.  (sure enough, within an hour Antony Spencer has advised me that it's made by The British Toy Soldier Company) 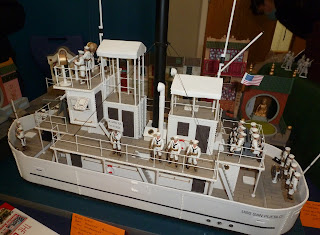 Those sailors to look pretty smart. 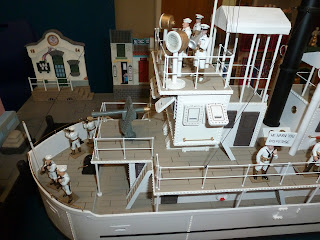 I quite liked the backdrop of 2D Chinese shopfronts too. 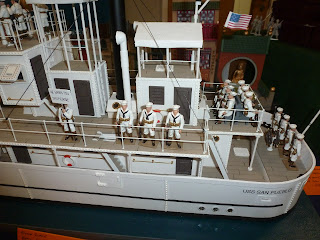 I thought the mood in the show was rather sombre, but that's only to be expected in the circumstances.  Still, it didn't stop me adding to the pile of unpainted figures and it was great to get together again with like minded friends for the usual after show drink.

From the Tennfigurer range of model soldiers produced by the master sculptor Holger Eriksson, I don't know who painted him but I think they did a great job on this fine figure. 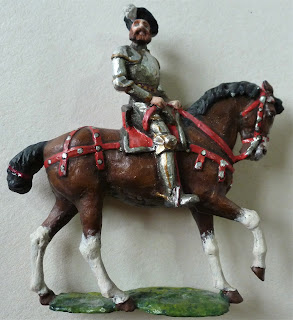 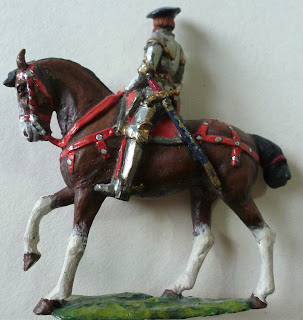