Well that's all done for another year!

Yesterday was the thirtysomethingth Plastic Warrior Show in London, I forget which number we're up to, a sure sign of ageing), here are a few of the things I took a shine to: 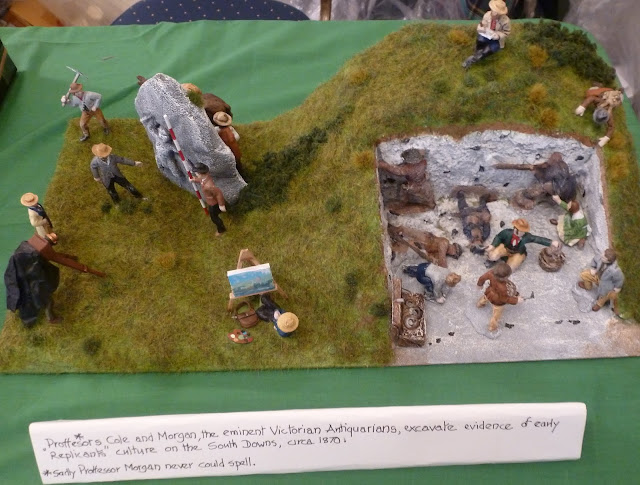 A tongue in cheek diorama made by Dan Morgan shows the archaeological discovery of  ancient Replicants figures in the South Downs of England.  The archaeologists are all converted from Replicants wild west figures.

The Plastic Warrior Show has become the traditional showcase chosen by Replicants to launch their latest range, this year they have produced a set of Texas Rangers.  Not the sharpest photo, sorry about that. 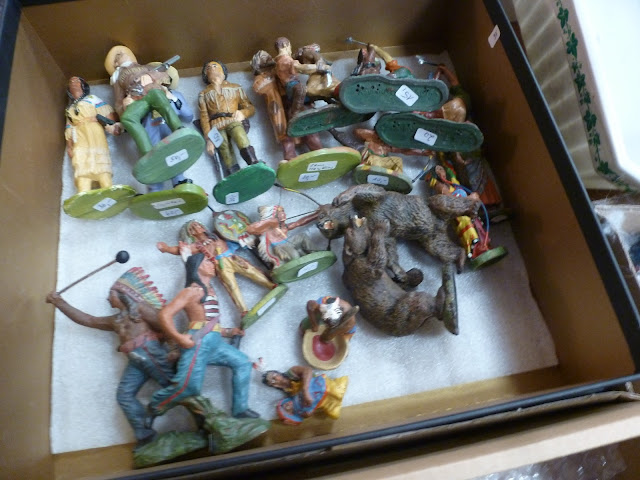 It's not all plastic at PW (although it is mostly), here a nice selection of Elastolin and others composition, I thought the bears were awesome. 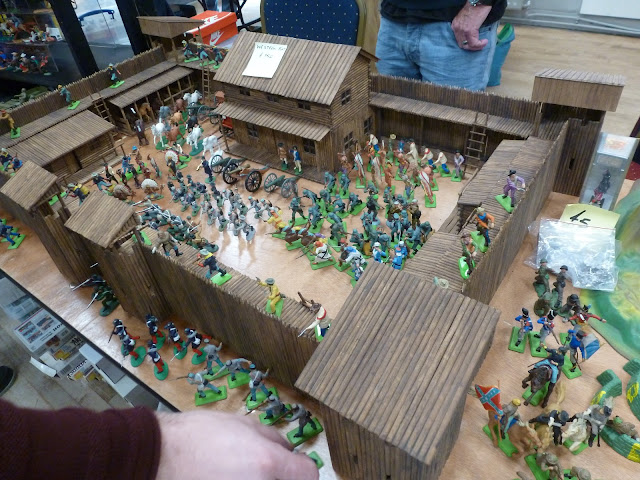 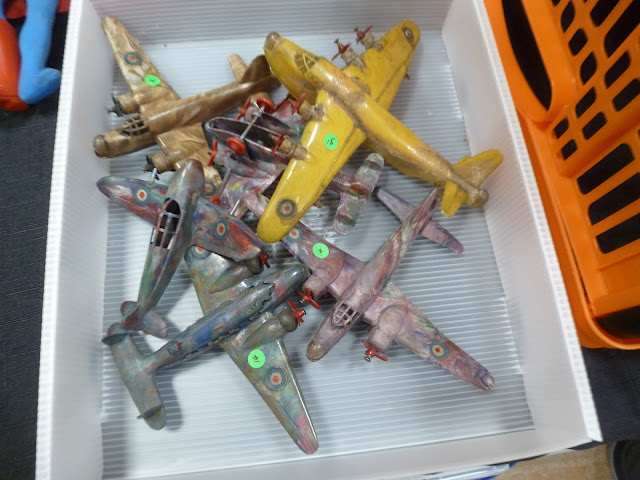 I love these early plastic aircraft, especially the twin engine bombers, I'm tempted to start collecting them but you have to draw the line somewhere........don't you? 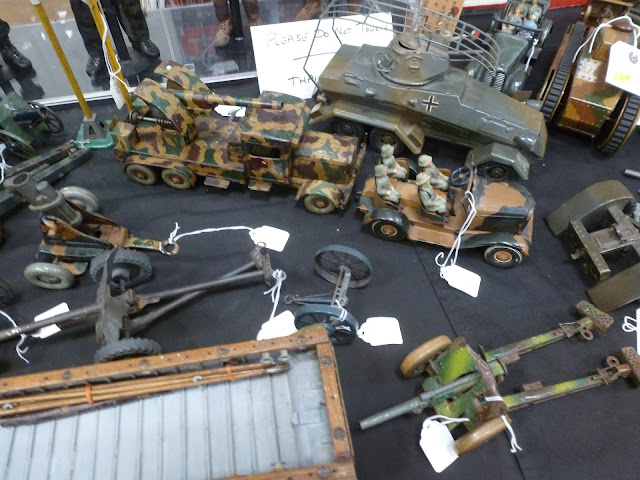 Some serious hardware here, lovely old German tinplate from the 1930's, the AA truck and jeep in the centre are by Tippco, I didn't dare to turn over any of the price tags! 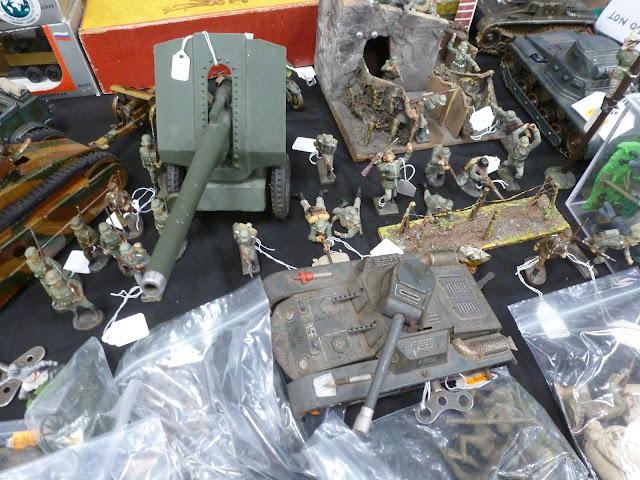 More from the same table, the panzer in foreground was made by GAMA, I don't recognise the large gun at the back but it looks to be like 1960's manufacture. 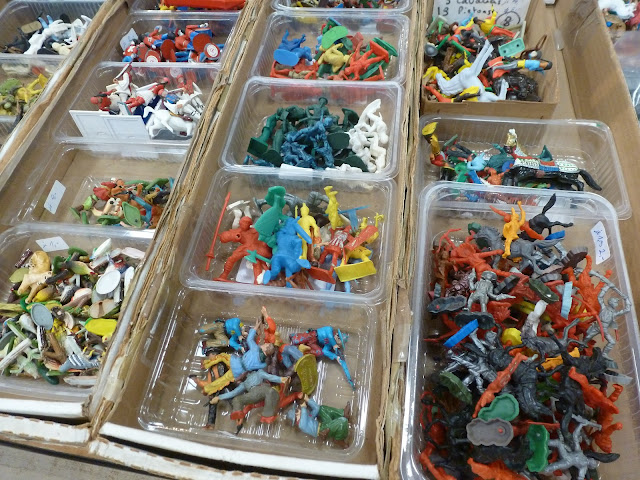 A typical table top at the show, an organised confusion of plastic figures, this table belonged to one of the German collectors.  Last year we had wondered what effect Brexit would would have on the attendance of dealers from Continental Europe, happily they all booked their tables way before Brexit was postponed, which bodes well for the future, it seems the lure of toy soldiers far outweighs a little inconvenience at customs.  The German guys were all staying overnight in Belgium so they could attend the Brussels Toy Soldier Show the next day......... and there was a spare seat for me if I wanted to go, was I tempted?  you bet I was. 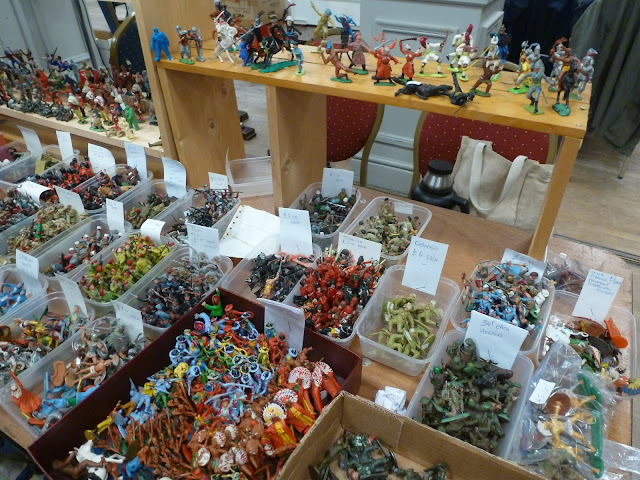 A nice selection of rare and early English plastics, it continues to amaze me how much of this stuff there is out there.  We all acquire far more toys than we need or want and the PW show has always been primarily aimed at collectors who want to dispose of their surplus, this year the show was fully booked well in advance and there was a sizable waiting list in the event of any dropouts.  I find this very encouraging, it indicates an enthusiastic and resilient collectors community.