Robert the Bruce in the Tower of London

Over on facebook someone on the "Friends who like Plastic Warrior" group was asking about the plastic figures made by John Niblett & Co (Modelmakers) Ltd that used to be on sale at the Tower of London.  I have a couple of them so I put a picture up on the group, they're such nice models I thought I'd post it up here too. 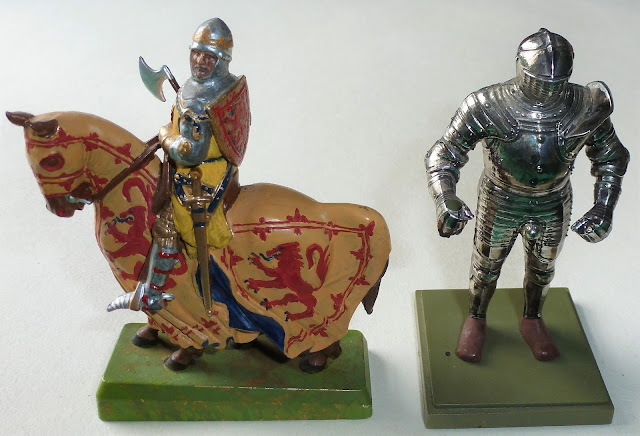 Robert the Bruce is based on the 1964 statue at Bannockburn by Charles Pilkington Jackson, the rider is a little over 54mm and I think it was originally sold with an unpainted gilt finish.  I bought this back in the 1980's as part of a collection, sold at Phillips Auctioneers, which had belonged to a chap who'd been a serious student of heraldry.   His collection had been broken up into several lots, most of which were high end metal models, but there was also a big box of plastic odds and ends that nobody was interested in, so I went for it. The box contained lots of conversions which he'd made himself, based on historical figures and all painted in the correct livery, so I'm guessing that he painted up this model of the Bruce.  Helpfully he put a little hand written sticker on the bottom of each base to say who the model was of.

The second model is the suit of armour of King Henry VIII which I seem to recall had been on display at the Tower, it stands about 80mm high and is missing a pikestaff but otherwise is in original condition.  I know there was at least one more model in the series, a mounted knight in Gothic armour but there may have been more, anyone know of any others?  John Niblett is of course best known for his work on the 1:72nd scale figures for Airfix but he worked on a freelance basis for several manufacturers as well as producing these and his own range of very fine wargame figures.

As mentioned above, I have recently joined facebook, which is a sure omen that it will shortly collapse, if my past history for joining such groups is anything to go by!  In the meantime I'm enjoying touching base with many old names from the collecting world who don't necessarily bother to follow the blogging world.  My only beef with FB is that the photos don't blow up very large and I'm very much a pictures person, also you have to trawl through reams of stuff if you ever want to refer back to them.  For these reasons I will probably post pictures here and on FB, I hope that won't become too annoying?

Posted by Brian Carrick at 14:27 No comments:

In the past few weeks these three magazines have arrived through the post, here are some more details: 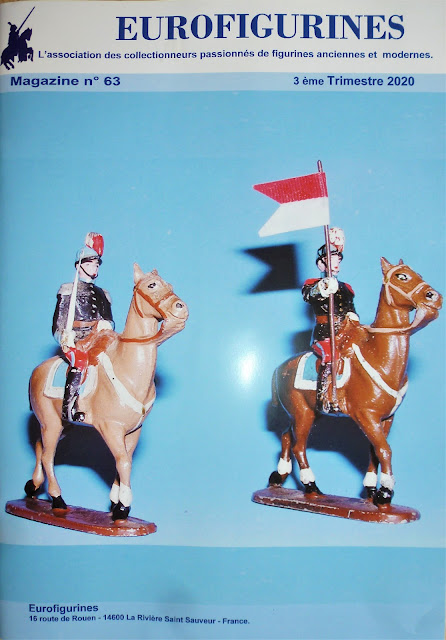 I was particularly pleased with this issue as it opens with an article on TRIUMF a Belgian manufacturer of composition figures which I'd never heard of but they are the same figures as we had in England made by TAG, which I covered back in February HERE  The really useful thing is that this article includes a catalogue listing of all the figures they produced.
Other articles cover; Regiments of Saint Cyriens,
Curiosities finds and photos,
Washingtons Regiment by Elastolin,
Elastolin water carriers,
The Emperor and his Old Guard,
Knights of the middle ages in aluminium by Krolyn of Denmark,
Fox hunting figure sets,
Pirates by Starlux and Cyrnos,
Greek Hoplites by First Legion,
Toy soldiers made in conjoint tin (part 4),
Palmer (USA) Astronauts,
and finally Arctic Explorers. 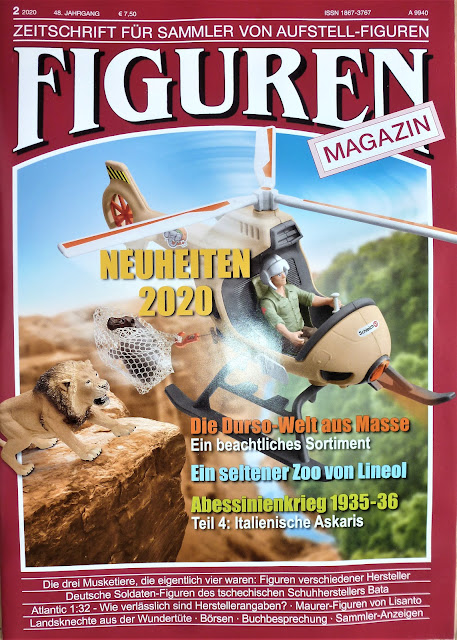 Opens with a report on the 2019 Nuremburg Toy Trade Fair, which seems to have a lot more of interest to toy soldier collectors and modellers than the London Toy Trade Fair does these days.
It continues with; Italian Askaris of the Abyssinian War in composition,
Wooden cut out figures of the German army made in 1930's in Czechoslovakia by Bata,
Personality figures of the Czech President T G Masaryk,
The composition figures of Durso (Belgian),
The Three Musketeers,
Wundertute (Lucky Bags) Landsknechts from Heinerle,
Atlantic Longhorn cattle in 1:32,
Lineol Zoo rarities,
Timpo catalogues 1968 to 1979,
Bricklayer made by Lisanto,
The Siege of La Rochelle diorama,
Latest Preiser catalogue,
Timpo Toys Special Issue No. 3 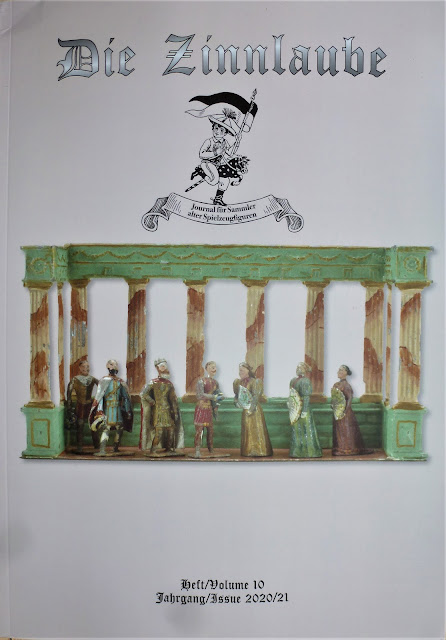 This was previously the newsletter of the collectors group FAS "Freunde Alter Spielfiguren" but it has now become and independent journal, I don't know the reasons for the change of editorial team but wish them well.  Text is in German and English, and it's published roughly once a year, the theme for this issue is the 150th anniversary of the Franco Prussian War, articles include;

Glasenapp's volunteer hussars at the Battle of Rotha 1762,

Cinderella in tin and lead,

Vignettes for the Death of General von Craushaar 1870,

the search of Jager Tromm - Prussian Jagers in tin and lead,

Prussian Staff before Paris 1870 by Haselbach/Rieche,

So all in all a lot of very varied articles to get through.

Subscription details for all these magazines are on their websites so just give them a quick Google rather than have me bore you with the same old information time after time.

Posted by Brian Carrick at 14:08 No comments: