The Funny Little Wars Group recently gathered together in a dank, foreboding, cobbled courtyard, in a long forgotten corner of old London town. The cries of cutpurses, ne'er do wells and an angry mob echoed in the surrounding alleyways and rookeries........ you couldn't ask for a better setting in which to recreate Paris of the Communards in1871. 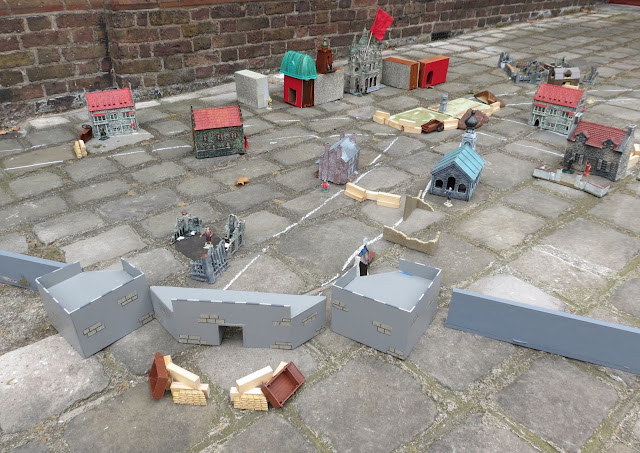 The western suburbs, from the gateways in the crumbling ancient walls, wide boulevards run through to the heart of the City.  The boulevards are denoted by chalked lines, the areas between the boulevards are a congested warren of houses and narrow alleyways (you have to use a bit of imagination here!) 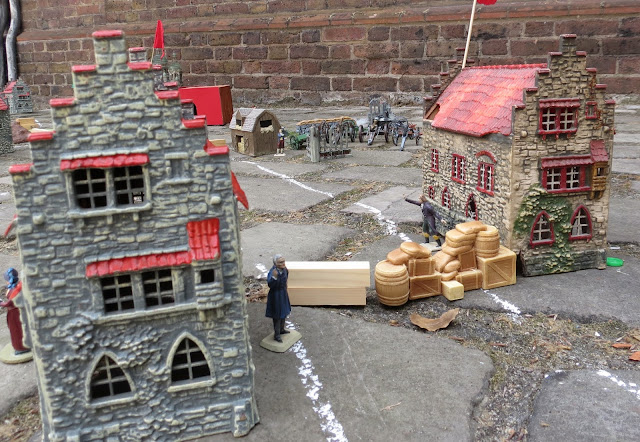 The National Government has fallen after embarking on a disastrous war against Germany which saw the City subject to a six month siege and the humiliating capture of Emperor Napoleon III at Sedan.  A new Government of National Defence has been established at Versailles, troops are sent to recover all the artillery from Paris but they are opposed by a popular uprising of the workers at Montmartre, backed by the Paris National Guard 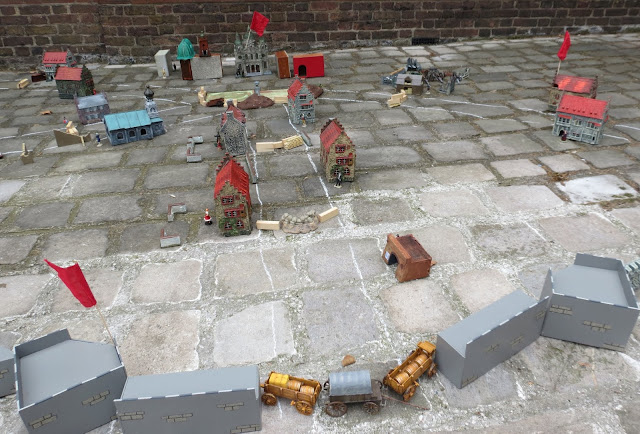 The view from the South Gateway, the red flags of the Revolutionaries fly from all the major buildings seized by the National Guard, the artillery park at Montmartre is in the left background.  Prominent supporters of the Versailles government, the clergy and Archbishop Darboy have been rounded up and imprisoned.  Elections are held and a Commune Council is installed to run the City. 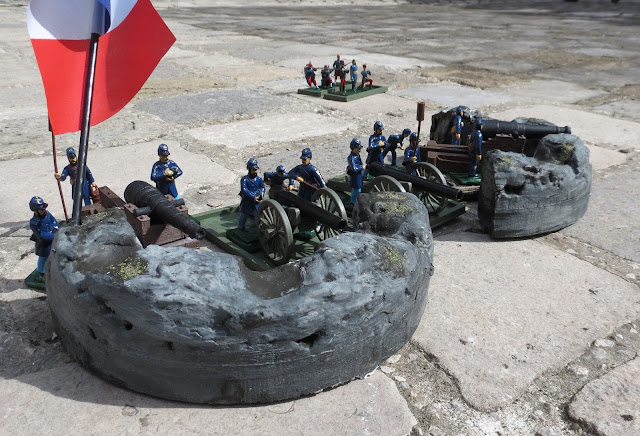 Meanwhile Versailles builds an army, calling in troops from regional garrisons, gendarmes, firemen, naval and foreign legion units.  Marshal MacMahon is ordered to retake Paris, he occupies the surrounding forts and opens a bombardment of the City. 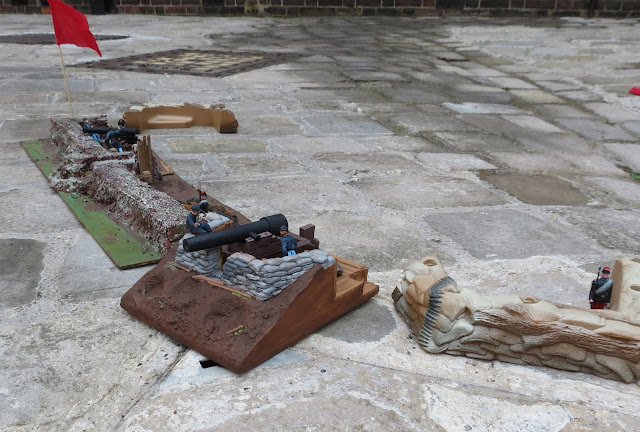 MacMahon marches on Paris but his way is blocked by Fort Issy which is still held by the Communards.  The garrison Commander, Leon Megy, has taken the precaution of barricading himself in the forts deep wine cellar, several hours later a runner is sent back to Paris to inform the Council that he is in no fit state to command.  A company of National Guard are sent to assess the situation, and stiffen resolve in the fort, they have secret orders to spike the guns and escape if resistance looks untenable. 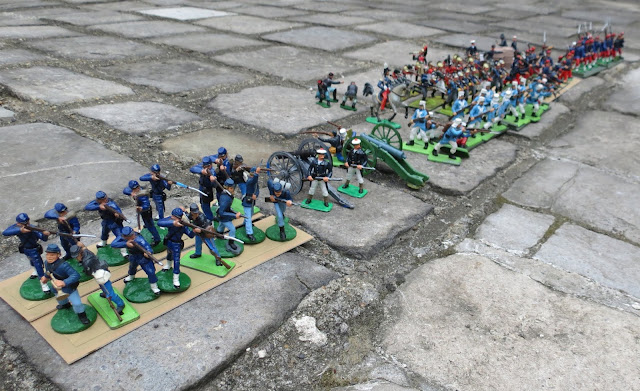 MacMahon's columns suffer heavy casualties from Fort Issy as they advance but eventually they surround the Fort and overwhelm it.  The garrison manage to spike the guns before they surrender, they are then executed by the victorious Versailles troops.   This sets an ugly precedent which will have unfortunate consequences for the hostages under arrest in Paris. 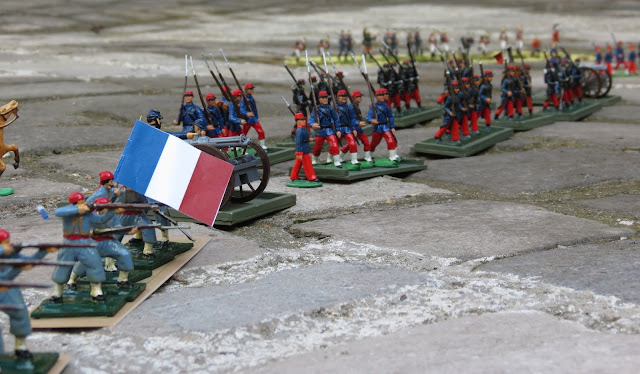 The indiscriminate bombardment of  Paris has continued daily and turned much of the suburbs to rubble but caused relatively few casualties.  Rather than cower the Communards it has strengthened their resolve to fight to the end. 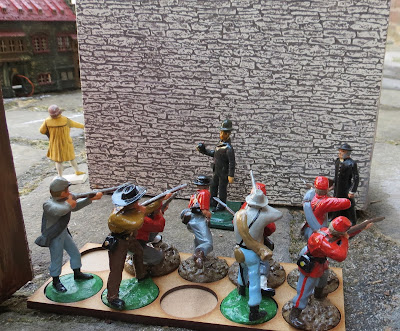 Meanwhile the Revolutionaries have not been idle, barricades are thrown up, buildings booby-trapped with explosives and incendiaries.  The newly formed Committee of Public Safety have ordered more arrests of anyone suspected of supporting Versailles.  A sweep of the suburbs uncovers a counter-revolutionary plot to rescue the hostages and the traitors (seen here in prison with Archbishop Darboy) face the firing squad. 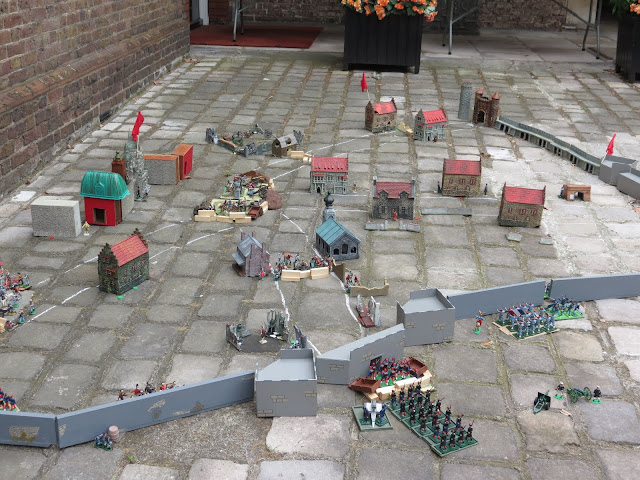 The biggest problem for the Communards is that they don't have enough men to hold all the strongpoints in the City, also they have an abundance of artillery and shells but few artillery crews trained to use them. 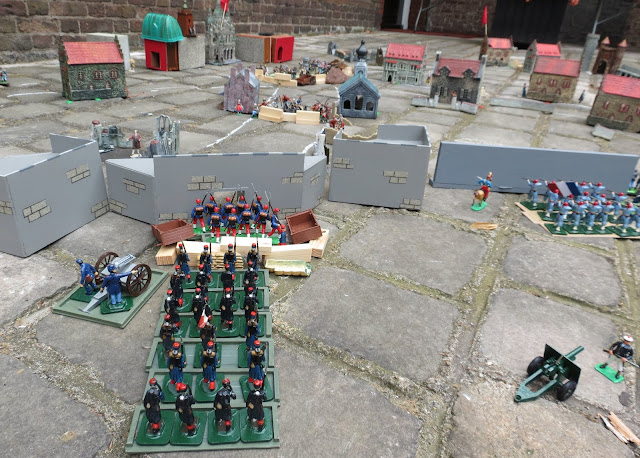 As MacMahon's troops forced their way into the City, my character, Gustave Cluseret, was arrested by the Committee of Public Safety and accused of leaving the gates open, I was to be tried for Incompetence.....or Treason.......or Both! (don't you just love committees?).  News that I would face the firing squad when found guilty drew rapturous applause from my fellow players! (steady on lads, it's only a game). 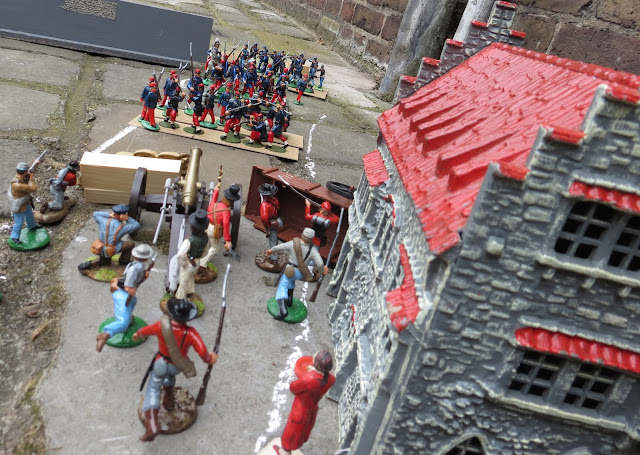 Happily a favourable roll of the dice saved me from the firing squad!  A desperate struggle begins in the streets and alleyways as the Communards struggled to withstand the steady disciplined advance of the regular troops, canister shot rips gaping holes in their ranks but there are just too many to stop and the revolutionaries are continually forced to fall back from one strongpoint to the next. 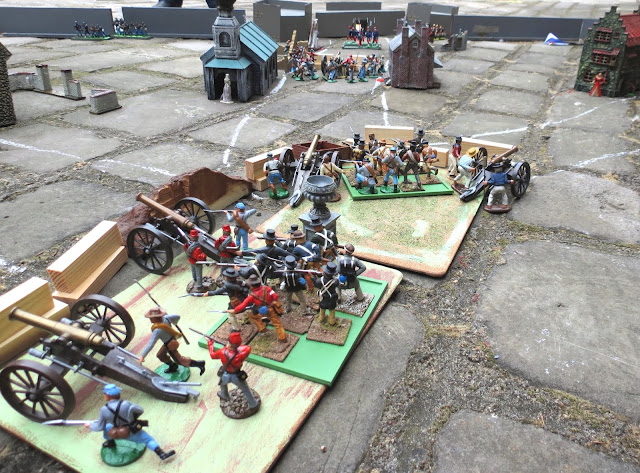 As the fainter hearts among the workers begin to drift away the fervent hard core revolutionaries dig in and prepare to sell their lives dearly as the fighting grinds down into a struggle from house to house.  There are also a few surprises held in reserve, as the regulars seek cover in unoccupied houses they set off the infernal traps, the air is rent with explosions and fire sweeps through the district, although the actual casualties are light.  The regulars must now face the fury of the Petroleuses, emotionally patriotic women (seen here in front of the buildings left and right) who launch themselves suicidally at the invaders, bombs in hand, this time the casualties are much heavier. 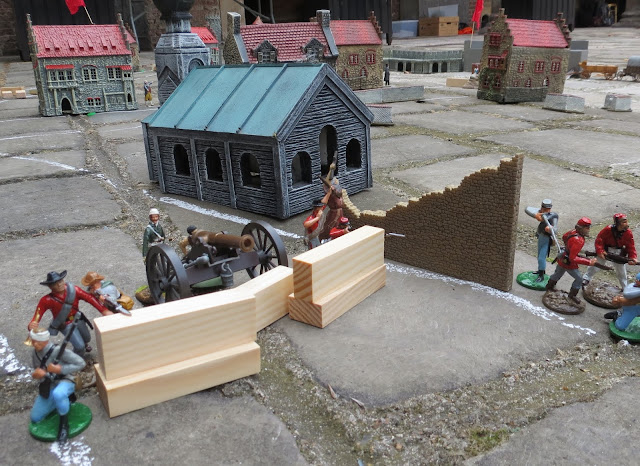 As the ranks manning the barricades get thinner and thinner, only the fanatics remain and the inevitable end is in sight.  A massive quantity of partypoppers were expended simulating the effect of canister shot, booby traps and the bombs of the Petroleuses.  Great fun! 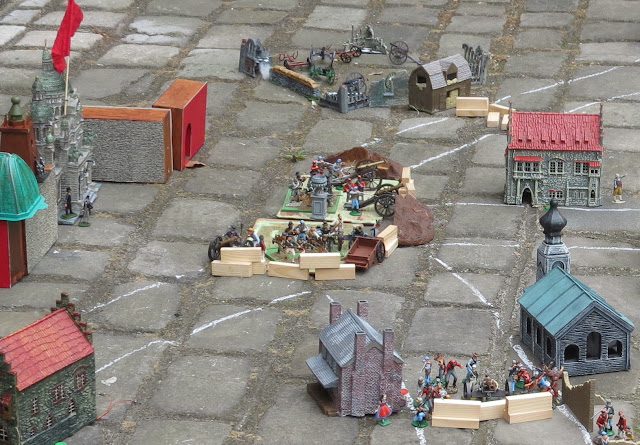 While all this has been going on, the Versailles Government has been negotiating with the German Army, who still occupy the eastern approaches to Paris, to be allowed to pass a another column of troops through their lines and attack the undefended eastern suburbs of the City.  this new column races through the streets brushing aside the light defences, as news of the impending collapse reaches the Central Committee there is just enough time for me to give the orders for Archbishop Darboy and the hostages to be executed while all the prominent buildings are put to the torch.  The new attack quickly reached the central redoubt but we didn't hang around to take any pictures of their triumph.  My comrade Louis Delescluze (played by Graham A.) donned his red sash of office and honourably climbed onto the barricade, pour encourager les autres, where he was promptly shot dead.  I decided that discretion was the better part of valour and made my escape during all the confusion dressed as a nun.

And thus ended the Paris Commune of 1871.

Okay it didn't all happen quite like that but my rendition of events is closer to the truth than some of the more spurious Versailles sponsored propaganda you are likely to see appearing in other parts of the blogosphere.  A nasty, vicious little campaign, as the quelling of civil insurrections so often are, but also an interesting and unusual one which throws up a lot of fascinating personalities and is so often overlooked by the enthusiasts of military history.
Posted by Brian Carrick at 15:48 13 comments:

Anthony has taken delivery of the Rorke's Drift compound, commissioned from Mike Lewis of Imperial Miniatures, who designed it for use with the BattleCry or Portable Wargames rule systems.  As with our previous Risorgimento game there is a scenario sheet for playing Rorke's Drift using BattleCry on the Command and Colours website, so we decided to give it a spin, here's how it went: 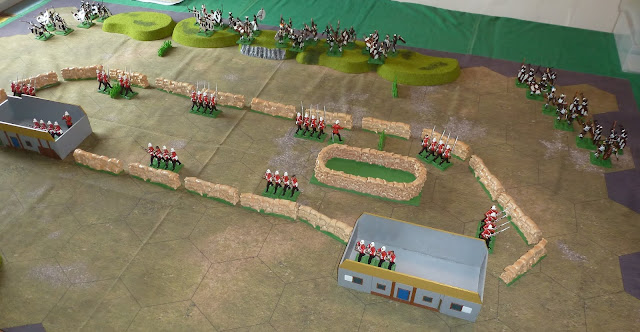 An overview of the compound model, designed in modular form for ease of storage and transport, it can be reconfigured for other scenarios. 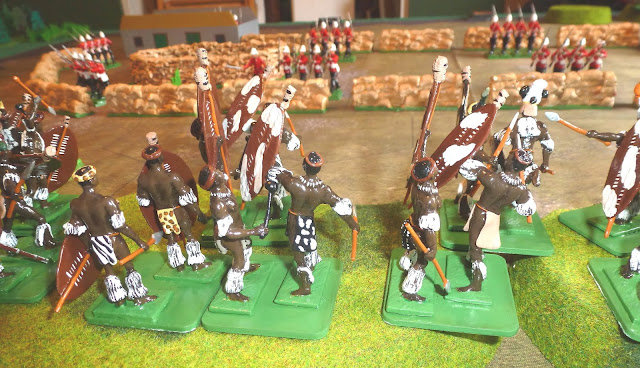 All of the figures are from Anthony's Zulu War collection and are made by Little Legion Toy Soldiers they really are a joy to game with. 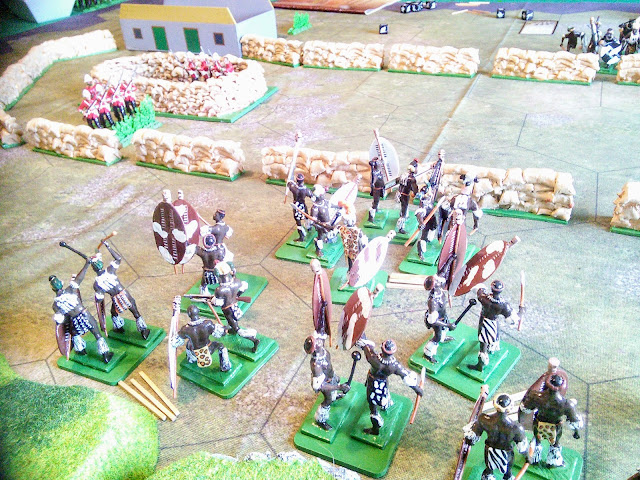 The mechanics of the game require the British defenders to withstand three waves of Zulu attacks.  A wave is repulsed when four Zulu units have been destroyed, the Zulus then return to their starting positions to begin the next attack wave.  All Zulu units are reinstated at the start of each new wave to represent their overwhelming numbers. 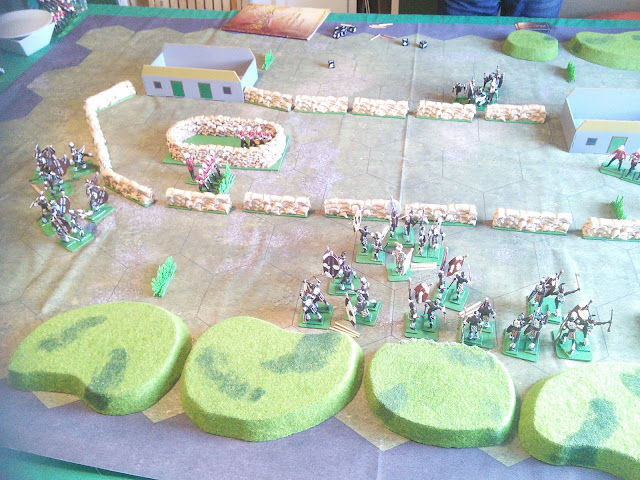 At the end of each attack wave the defenders are allowed to rearrange their formations within the compound but their casualties are not replaced, so the garrison is being steadily depleted.  Victory objective for the Zulus is to destroy all the British units. 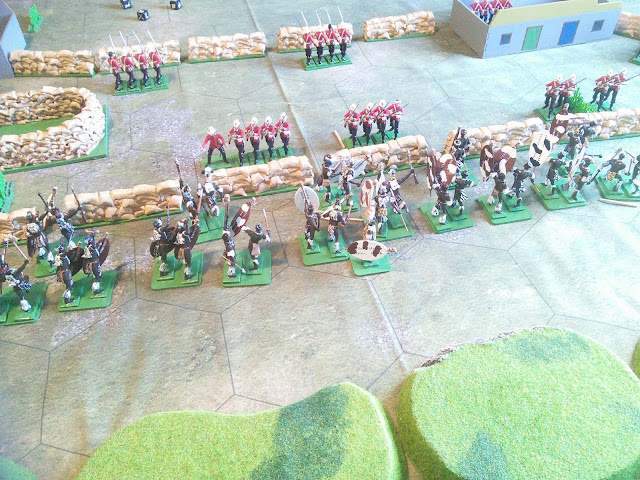 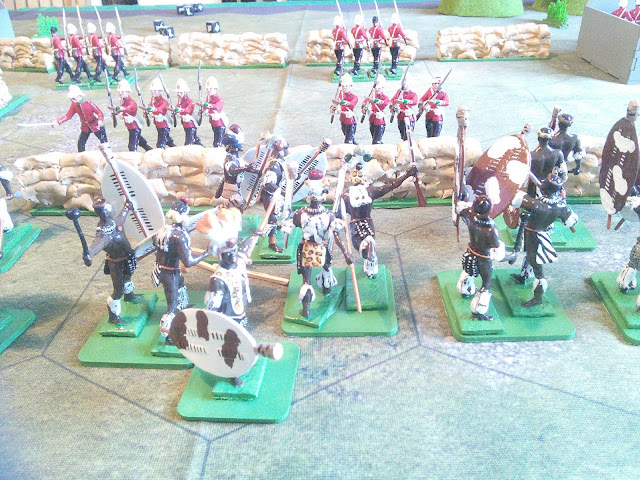 The second wave approached more cautiously and succeeded in breaking into the compound but concentrated fire from the redcoats drove them back and they were repulsed again.