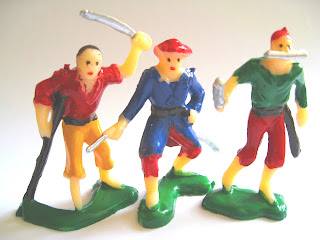 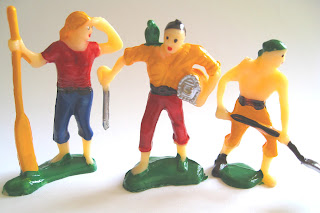 More new 54mm plastic toy soldiers from China, these are hard polystyrene copies of the old Marx pirates, the mouldings aren't too crisp but they are passable and quite useable.

Coming soon to a cake shop near you!

This looks to me to be a copy of a plastic Elastolin figure, I bought it in a local baking shop last week and it is part of a set of cake decorations which mostly comprises copies of Britains Wild West series. This example stands (or lays) about 60mm in size and is made in a slightly bendy but acceptable PVC, it is clearly marked "made in China". While we all naturally abhore the practice of pirating or copying another companies products, would I like to see the venerable inheritors of the Hong Kong trade make copies of say..... the Elastolin Huns? You bet I would.
Posted by Brian Carrick at 10:31 4 comments:

Musketeers by Guilbert of France 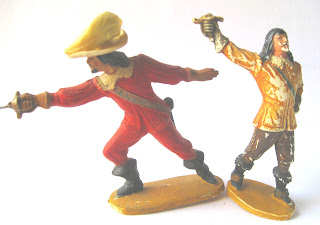 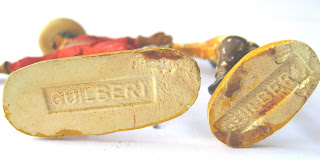 Guilbert didn't make a lot of stuff but what they did was very good, these were some of their early production in an acetate material which generally doesn't stand the test of time very well.  These examples have the name marked on the base but many don't, they are distinguishable by the hats and plumes which are moulded seperately and glued on, also the swords are just a length of wire, originally I thought that this was just a case of somebody repairing a broken figure but all the early examples I have seen are like this and it was a common practice with a number of early French plastic manufacturers.  Later production was in white hard polystyrene and I'm not sure I've seen any of these with the manufacturers name marked underneath.  I do think they have a certain elan.
Posted by Brian Carrick at 19:59 No comments:

Q. When is an Airfix not an Airfix?

A. When it's a Hong Kong copy.  I've been having an off-on tidy up of my toy soldier room for several months now, it's not that it's a big area but that the concept of "go tidy your room" does not become any less tedious or disheartening just because you've left adolescence far behind!


Anyway, in the darkest corner of a long forgotten cupboard I discovered an old shoe box which I'd quite forgotten about.  Way, way back in the days before ebay, and toy soldier shows plastic figures could be quite hard to find, you could get plenty of hollow-cast Britains or "connoseur models", if you had the money, but plastics were considered to have no intrinsic value and consequently there was no market for them.  It was in this period of plastic austerity that I started collecting pirated copies (or knock offs if you prefer) of mainstream products, mainly out of desperation to collect something, and that long forgotten period came back to me when I opened the shoe box. 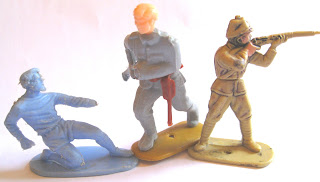 Of course the copies weren't all made in Hong Kong, that bastion of enterprise which we Brits rented off the Chinese for the better part of the last century, but they were by far the most prolific.  The most commonly copied figures were Britains, particularly the Herald Khaki infantry but in fairness the British companies making copies of these were legion: UNA, VP, Johilco, Benbross, Tudor Rose etc.  From the shoe box I've pulled a few of the figures that I found amusing in the hope that someone else might feel the same.  First above is a copy of an Airfix footballer, nothing special about that just that the originals are not that common.  The Japanese rifleman standing firing has been made in two parts, he swivels at the waist to make him a sort of swoppet.  The manufacturers really went out of their way with the grey figure in the middle, he's a copy of the Airfix WW2 German infantry running with rifle at the waist but he has been made as a swoppet with six parts.  Like the Jap he swivels at the waist but he also has a plug in base and head (the head is copied from the first version Timpo German with a press on helmet, helmet missing here) but the great thing is that they've made a belt for him in brown plastic with bayonet.entrenching tool and gas mask canister.  Rarely can anyone have gone to so much effort to make something infinitely inferior to the original. 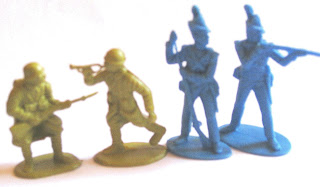 The next bunch I pulled out were two of the Airfix HO (1/72nd) scale WW1 French which have been pantographed up to about 40mm scale.  Pantographing figures down in size and is quite common and in fact most modern 54mm figures are sculpted three times larger than the final finished product and then pantoed down in order to creat a mould with sharp detail.  How great would it have been if they'd worked this magic on all the Airfix WW1 ranges, 40mm is just ideal for table top wargaming.  The two Napoleonic British infantrymen are nice crisp 54mm copies made in Poland and I've included them mainly to give an idea of scale.

My favorites have to be these Airfix American Revolutionary figures, again they've been pantographed up from HO scale to about 40mm, in typical Hong Kong fashion they have taken the American infantry and painted them up as British but retained the stars and stripes on the flag!  These were being sold as cake decorations when I got them, I'd love to get more.
Posted by Brian Carrick at 14:38 8 comments: