Soldiers in Silloth come to London

Up in Cumbria there is a museum dedicated to Toy Soldiers, it's called Soldiers in Silloth and for just 3 days part of their collection is coming south to London courtesy of those nice Swedes at IKEA.  The Exhibition opened yesterday and ends on Saturday (24th January), its at the The Proud Archivist, 2-10 Hertford Rd, London N1 5ET, so if you happen to be in London why don't you pop along, as I did yesterday. 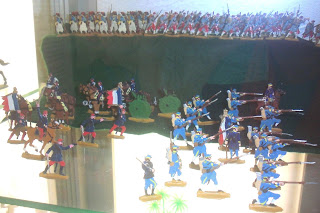 A selection of types from the Imperial French Army of 1870 fill one half of a cabinet while their Prussian opposition (out of picture) command the other half. 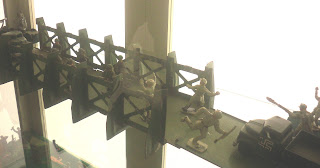 Lone Star paratroopers force their way across a Bailey Bridge in face of stiff opposition from the Afrika Korps.  I don't know who made the bridge, which all breaks down into it's constituent parts, but I've been after this item for as long as I can remember......and that's a long time......even though my memory isn't what it used to be! 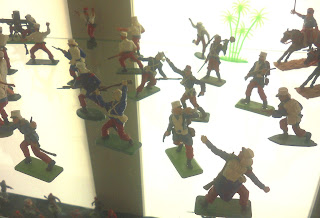 The Foreign Legion advance across the burning sands against rebellious tribesmen who are (as all good guerrilla fighters should be) out of  shot. 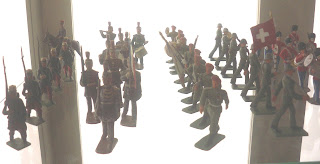 French, Swiss and Danish troops on parade to show how International this hobby of collecting toy soldiers is. 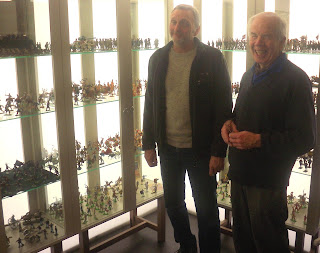 A wider shot of the collectors cabinets (which are actually the point of the exhibition) with Peter Evans (left) from Plastic Warrior magazine and Tim Barker who created the museum.

My apologies for the poor quality of the pictures and some of the better ones didn't even come out - Elastolin, Starlux and Russian made medievals to name but a few.

The exhibition at the Proud Archivist is titled "The Collection" and has been organised by IKEA to showcase the various ranges of  display units they produce for displaying collections in the home, and very good they are too (I have some myself).  Apart from Toy Soldiers there are also collections of Vintage Cameras, Pez machines, Beatles memorabilia, Lego and Retro Fashion so there is plenty more to browse around

If you can't make it to the exhibition you can always make a note to visit the museum if you're holidaying in the Lake District - here is the link: Soldiers in Silloth

The latest issue of Figuren Magazin hit the mat this weekend, it's the final issue for 2015 and I guess it got caught up with the Christmas post, nonetheless it's a very nice start to the new year. 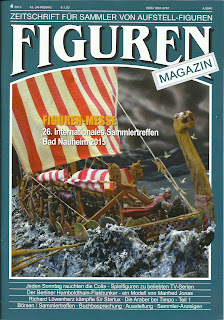 Contents include:
Report on the 2015 International Toy Soldier Show at Bad Nauheim (I keep promising myself I'll try to get over to this show again each year)

The Western Train made by Hausser (Elastolin) - it's origins (the prototype)

Reports on the Toy Soldier Shows in Herne, Neustadt, Altenburg, Wohlen and Hamburg 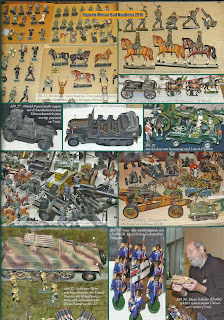 A sample page of the Bad Nauheim show report, lots of pics and not much text, that's just how I like to see reviews.

Printed in German throughout, but easy to follow with lots of images.  A few too many show reports in this issue for my liking but hey, it's just as well to get them out of the way in one go.  In recent years there have been a lot of small firms setting up in Germany making 7cm figures in the style of the old composition but  made in resin and they only seem to show their wares at the German shows.

A subscription of 4 issues costs 33 Euro to Europe or 39 Euro to Rest of World. More details here: Figuren Magazin