This month, July 2013, celebrates the 150th anniversary of the Battle of Gettysburg and earlier this week a band of enthusiasts came together to mark the occasion with a wargame using 54mm toy soldiers.  The real battle was fought over three days but we opened our action on day two of the struggle: 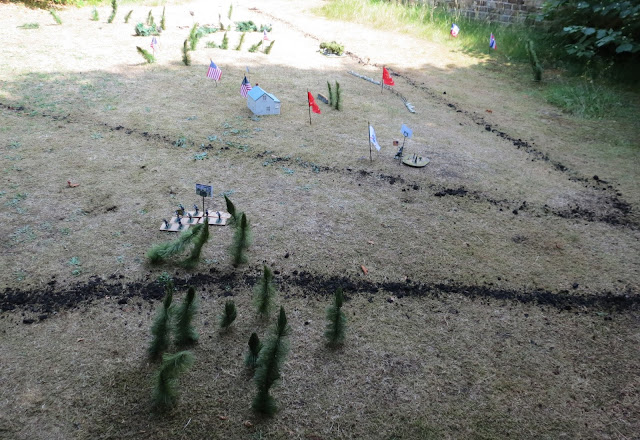 Overview of the field from Rock Run Creek looking west

The union forces are concentrated in a salient between the two roads that stretch from cemetery ridge where General Meade has made his headquarters all the way back to Little Round Top, the ground rises steadily from the town of Gettysburg up to the surrounding hills. Flags are placed to mark initial troop deployments (some are dummies) and are replaced by actual units when the umpire decides that they are in line of sight at ground level. 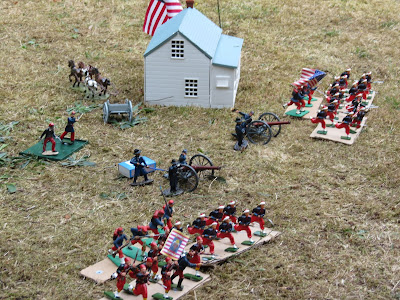 Meade's headquarters defended by a Regiment. of elite Zouaves and an artillery battery. 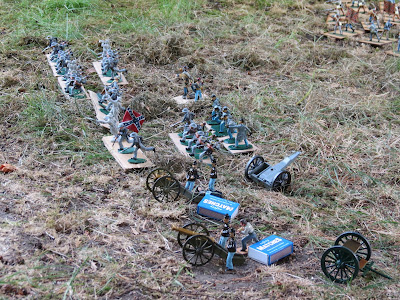 The rebel attack opens from the east of Gettysburg.

As in all good toy soldier games the cannon are matchstick firing but the guns have been issued with limited amounts of ammunition and conserving ammo starts to become critical as the game progresses, particularly for the Confederates who have limited resupply. 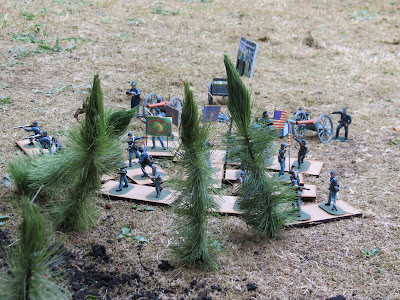 Union infantry occupy the woods to the east of Cemetery Ridge.

Battle opens on the Union right as the confederates advance over open ground towards the woods opposite Meade’s HQ. and push up the road towards cemetery ridge. The woods are occupied by Union infantry and a hot artillery duel ensues which sees heavy casualties on both sides but rebel pressure tells and the Feds are pushed back up the ridge. 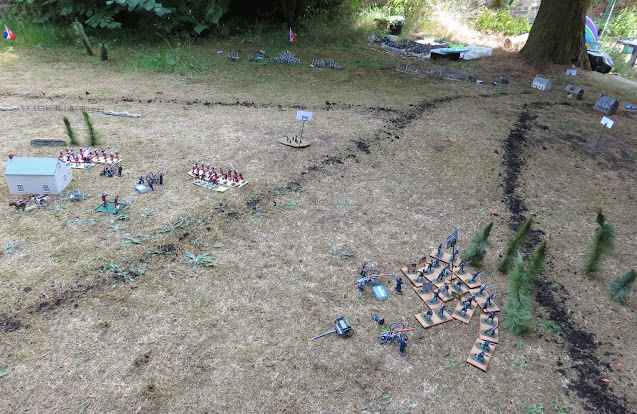 Overview of the initial action. 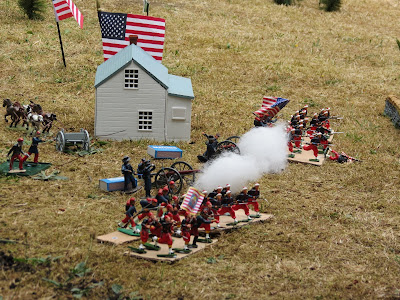 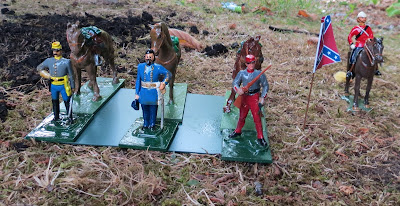 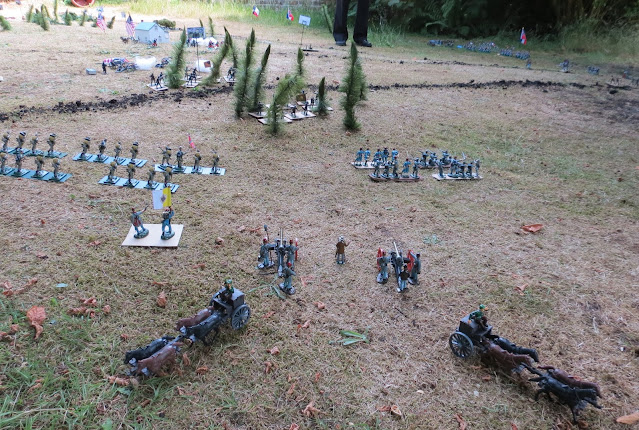 The Confederate Command watch as their attack goes in. 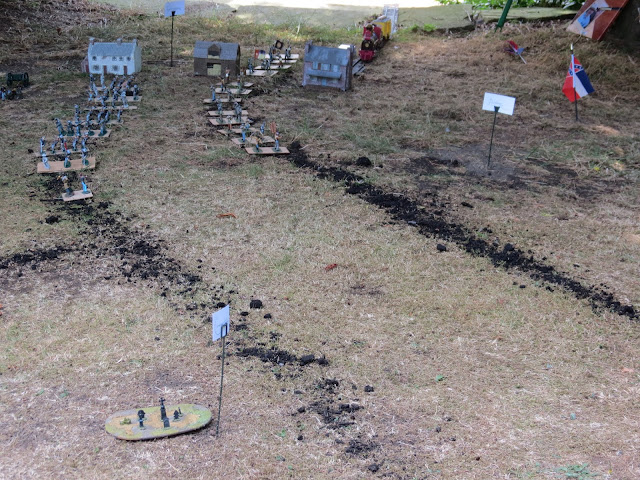 More Confederate Regiments appears on the Union left, working their way south towards Little Round Top, to close the line with another two Regiments believed to be hidden in the woods.  Up on the hills above, three Union Regiments with two Batteries await them.

The fighting becomes much hotter on the right and a Regiment is rushed from the centre to stiffen the Federal flank. 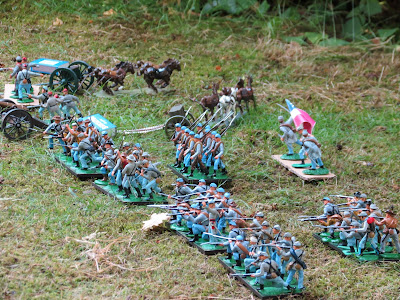 The Union left flank is rocked by the rising crescendo of the Rebel Yell! 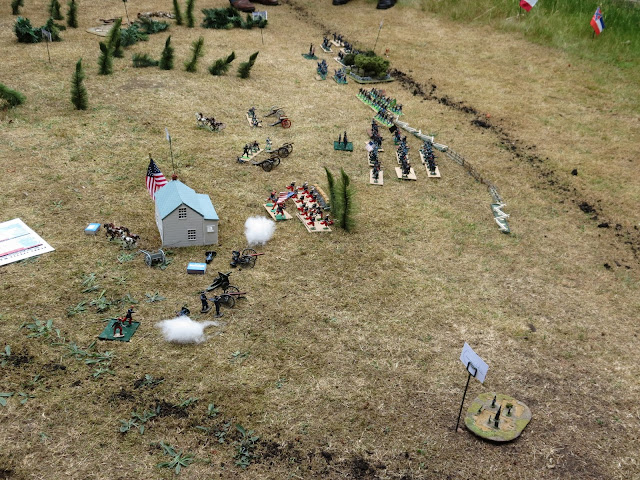 Up on Little Round Top the Yankee commander starts to get anxious that the expected rebel attack against him might just be a faint and he makes a probing advance to force the issue. Too late he discovers that he has been duped, the main attack is well advanced on the right while he has been sitting on the left with half the army and it’s guns. 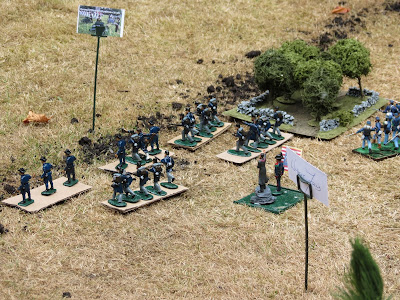 Union troops on the left advance across The Wheatfield and form line around the Peach Orchard.  (the plant markers were used to indicate geographical features) 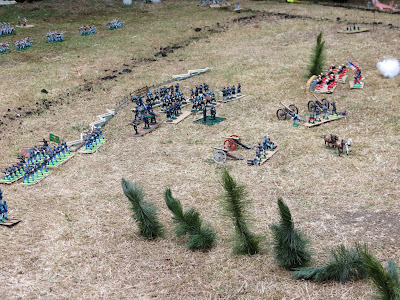 The Union left makes up for lost time, engaging the Rebel right to the relief of the hard pressed Zouaves holding the centre. 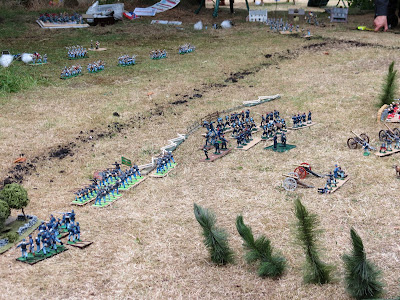 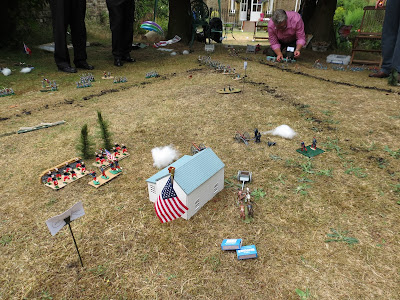 Good shooting from the Rebel guns took a fearful toll on the massed ranks of Union troops squeezed into the salient. 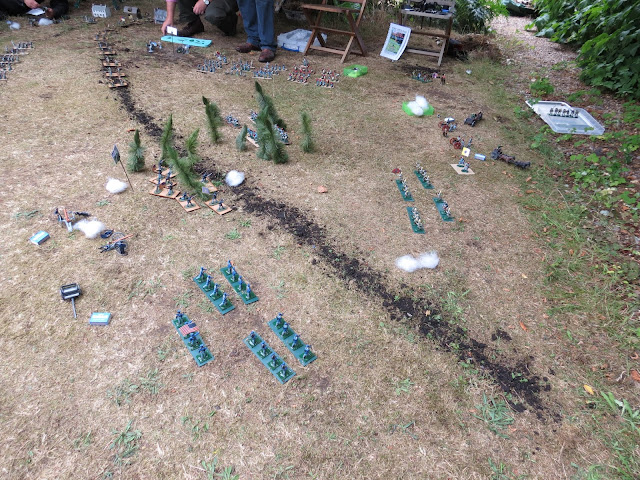 Pressure builds up on the right as more Confederate regiments are fed straight into the attack as they arrive in the line. 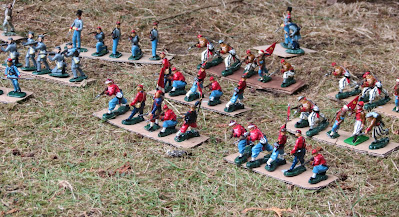 And yet more Rebels!  the whole of the South must be here today. 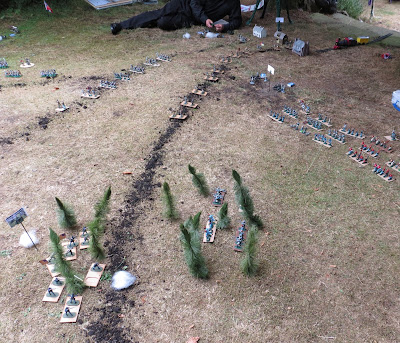 The struggle to hold the woods continues 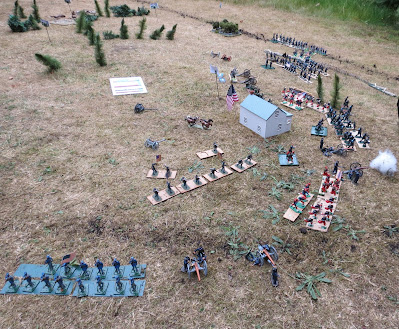 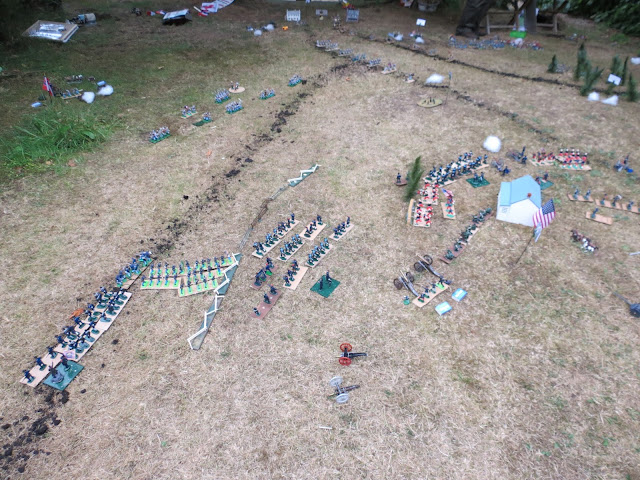 As dusk closes in the last couple of moves are played out, on the left the effect of massed rifle fire sweeps away the the Confederate right wing but in reply the Rebel counter battery fire finds the Union caissons ﻿and blows away the entire battery.

It was planned to play the game over two days and as the first came to a close honours were fairly even. The Confederate right had been destroyed and their artillery were now running perilously short of ammunition but their main strength remained intact on the left and in the centre. Union forces still held the ridge but had taken a fearful pounding and had lost nearly all their guns, both sides settled down to spend the night on the battlefield, in the morning they would redress their lines and continue the struggle.

Sadly I was unable to stay for the second days play so this is all I have to offer you but hopefully the story will be taken up and continued on the Megablitz and more blog of Mr Tim Gow who commanded the armies of the South on the day.
The game didn’t follow the path of the original battle and it was never intended that it should do so (especially with the well known Rebel sympathies of some players on the Union side!). All the players contributed several regiments each, the sight of so many toy soldiers set out on an extensive terrain was quite inspiring and made the effort of painting them up all the more worthwhile.

I recently read on a blog somewhere that "England is a country which gets nine months of Winter followed by three months of bad weather".  It's not true.  But given the washed out Summers we've had over the last two years it might as well be.  So when the sun unexpectedly shone last weekend I was unprepared for it but headed for the garden with my trusty camera and here are the results: 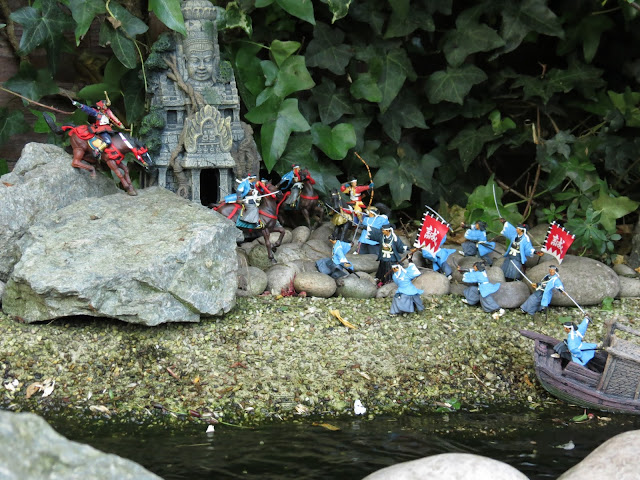 The figures are Samurai made by Furuta of Japan and they are  perhaps one of the best kept secrets in the world of 54mm plastic toy soldiers.  I've had these for a few years now and they rarely come out of the box, which is unforgivable, but they need basing and I'm not confident that my modelling skills are quite up to the job yet. 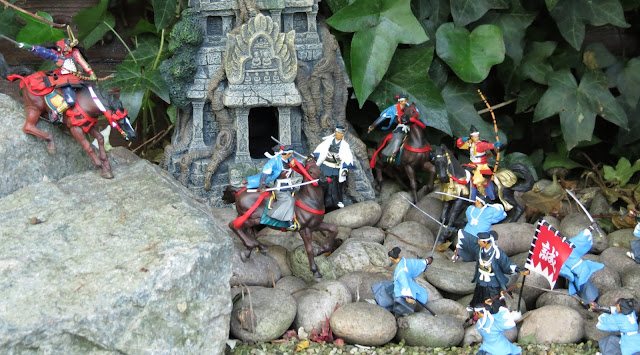 Made in hard plastic and factory painted they come in parts which clip together very snugly.  They are actually pieces for some sort of role playing game and you buy them individually in little packets a bit like Pokemon and such stuff.  Each figure comes with a sheet which I think describes his character but as it's all in Japanese I can tell you nothing more.  The figure bases are black plastic trays, also somehow integral to the game, which are quite unsightly and therefore need to be replaced (work soon to be in progress) 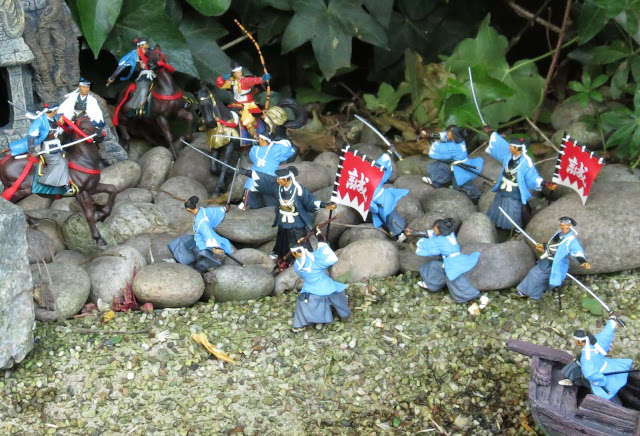 The sculpting is sublime, the foot figures are suspended in those balletic poses that only Samurai can achieve before they launch themselves cat like with blades swiping sending limbs flying and blood spurting in every direction.  The horses are so animated you can almost hear their nostrils snorting with the exertion and smell the sweat on their flanks. 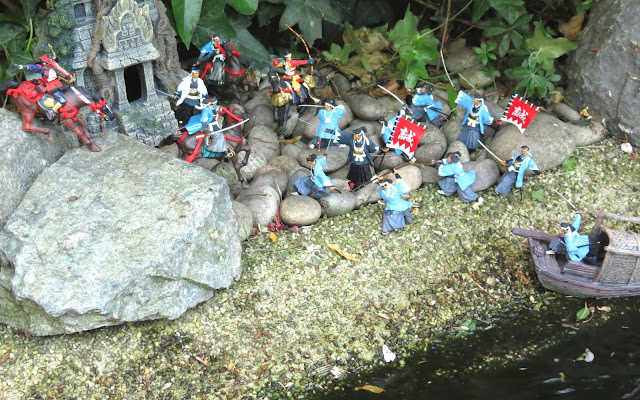 I've long had it in mind to use them in an 1870's Satsuma Rebellion style wargame pitched against the "Funny Little Wars" Japanese army I've been working on but I think I would find it too upsetting if they lost!

The backdrop is a stream I built in my back garden (two years ago just before the weather turned bad) with the intention of using it for garden wargaming.  It runs between two ponds the length of a shady border, where previously only weeds would grow, and in the absence of any military activity has become the habitat of varied wildlife, edged with rockery it is my own personal Hindu Kush.  It was inspired by the garden of Mr John Ruddle which has become internationally famous for it's landscaping which represents all the continents of the world laid out for 54mm wargamig.  I have visited John's garden several times but sadly without my camera so cannot share more with you.
Posted by Brian Carrick at 09:29 10 comments:

Email ThisBlogThis!Share to TwitterShare to FacebookShare to Pinterest
Labels: Samurai

I have finally managed to track down the boardgame mentioned in the last post, at the Nuremberg toy museum and here it is: 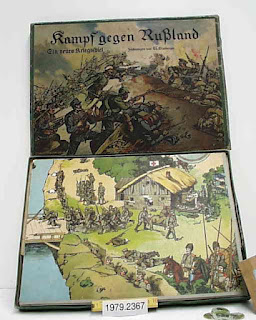 Bottom right hand quarter of the board showing Russian Cossacks and infantry.  Picture courtesy of the Nuremberg Toy Museum


Here's what they have to say about it:

The picture shows the box art and the lower right hand quarter of the game board. sadly the least interesting section but it gives a flavour of the artwork.
Posted by Brian Carrick at 19:46 2 comments: