It's surprising what turns up.

The recent mild weather in the South East (UK)  has ushered in the start of the Car Boot Sale season a little earlier than usual.  Our local one is held on a farm, so it's a good long walk in the early morning fresh air, and I like to go along as often as I can for the exercise.  Who am I kidding, I go along for the bacon rolls and to hunt toy soldiers!   It can be very hit or miss but  here's what I picked up this week and last: 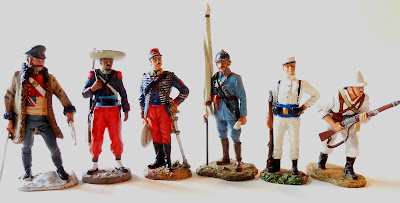 A group of modern white metal figures made by Del Prado, the first one depicting Captain Souter of the 44th Regiment of Foot could have walked straight out of the Last Stand at Gandamak painting by William Barnes Wollen.  The remaining five are all types of the French Foreign Legion, this series was issued in France but not in the UK so they are harder to find here, I use them mostly for uniform research and at less than £2 each they had to come home with me. 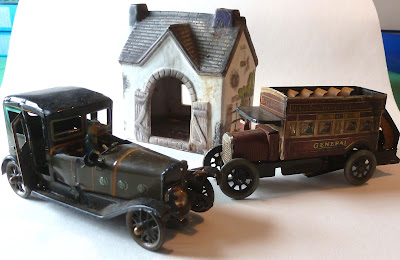 I know nothing about old tin toys, except that I like them, and I do like to include them as set dressing in wargames.  The saloon car is about the rights size for 54mm toy soldiers while the Omnibus is a bit small but I think we'll get away with it, they both need a bit of cleaning up and straightening out but nothing too drastic.  I don't think there's any great age to them, they look like modern reproductions to me but for a couple of quid each they had to go in the bag.  Likewise the ceramic stable block which was made to take a tea light candle but will now illuminate my toy village. 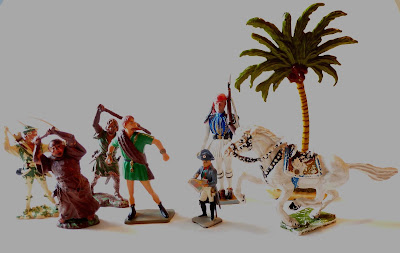 Finally a hotch-potch of odds and ends that came in at about 50p each from various junk boxes.  The first three Britains/Herald Robin Hood figures are so damaged and scuffed that they will end up as conversion fodder.  The Evzone and horse from the Lone Star Lone Ranger figure will be passed on to someone else at the forthcoming Plastic Warrior Show next month.

The remaining two figures I'll keep, the chap in green is a Starlux character figure of Barberousse (Red beard) from the ORTF (Office de Radiodiffusion Television Francaise) TV series Richard Coeur de Lion.  The set was issued in the mid 1960's and included two foot figures each of Richard, Redbeard and Blondel and one mounted figure of Richard, they're quite hard to find.  The diminutive figure of Napoleon was made in France by MDM.  The palm tree is a modern white metal item.

The Plastic Warrior Show is being held on Saturday 11th May and further details can be found on the Plastic Warrior blog, link in the column to the left.  Good Hunting!
Posted by Brian Carrick at 12:44 8 comments:

An interlude while I do some 1:1 scale painting

This past week I've been up a ladder with a paint brush redecorating the hall and this has necessitated taking down the display of toy soldiers I have there.  The figures need to be individually removed and dusted so I took these photos to remind me where they go when I put the display back up, as I'd taken the pics I thought I might as well share them with you dear reader. 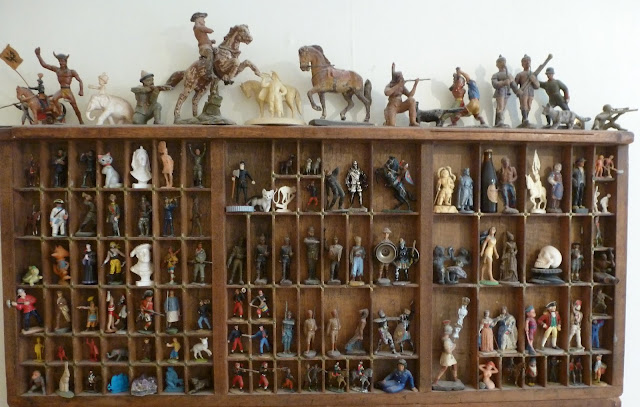 Discreetly camouflaged by several years of dust, the figures here are not any particular favourites just odds and ends that I've taken a shine to and picked up over time. Occasionally things get moved around but the order of display is largely governed by the size of each compartment. 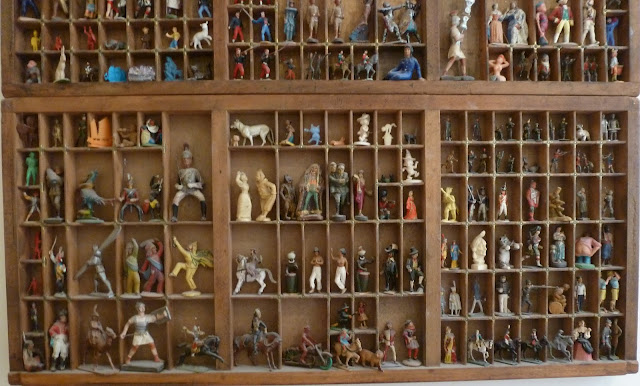 I've always been very open about collecting toy soldiers and when I mention my interest to anyone they immediately assume that I mean lead guardsmen standing to attention in red tunics (and in fairness there are a few of those), so this little display is my way of showing the diversity of the subject.  Click on a picture to enlarge, there are no prizes for identifying what they are but it might give you a minute or two of fun, now where did I put that duster?

The show in London last weekend seemed a little flat to me, but it was nice to meet old friends and I spent most of my money so that's what counts, here are a few of the things that took my fancy:

This little collection appealed to me, I really liked the tractor, it makes a change form horse drawn limbers and I'm sure it would be easy enough to bodge one out of some bits and pieces of tin and wood. 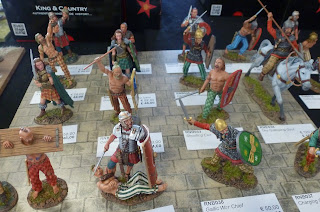 I have a descent sized Roman collection and I'm slowly building up the Gauls/Barbarians to go with them but the project has lost momentum so I took this pic to provide me with some inspiration, I think the figures are by King & Country. 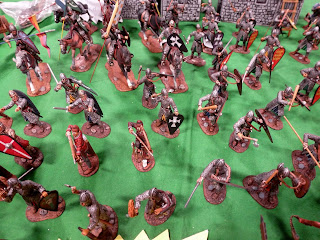 I've just finished painting up 50 Vikings, Normans and Saxons but have another 100 or so to go, mine don't look as good as this so the pic gives me something to aim for. 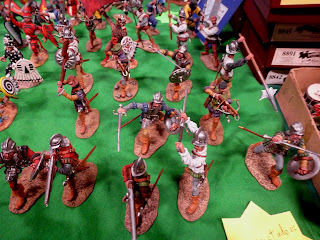 These superb Conquistadors are from a range made by Morgan Miniatures, my current project is a TudorBethan mish mash of 16th Century types so I took this pic to give me some reference points. 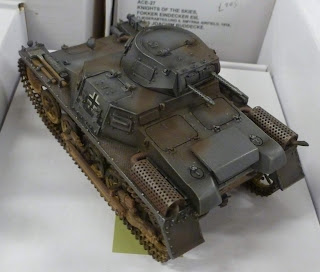 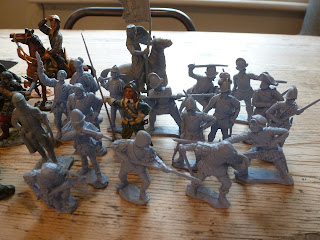 My stash from the show was mostly modern production, here the two sets of Conquistadors from Chintoys, I currently have two sets on the paint table and these additions will be used for conversions.  In the middle a lone pikeman from Replicants, found in a junk box, and at the back a mounted Russian made Teutonic knight alongside William of Normandy by Del Prado, the latter is a bit large but I find their personality figures ideal for command groups and at the moment they are as cheap as chips for the quality. 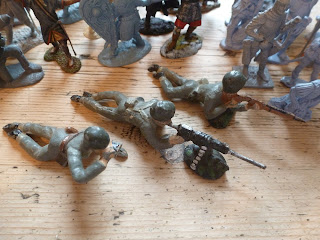 My only vintage purchases of the day, some Italian composition, I think made by Salpa but I need to check, they represent modern infantry which isn't really my thing but they were very cheap and I just liked the poses. 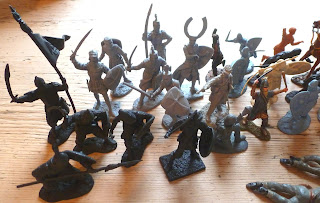 Rounding off, some Conte Normans on the right, to the left more of the unnamed Russian made Teutonic knights along with Seljuk Turks from the same manufacturer.  The knights vary in size from about 60mm (which is just about okay) up to 70mm, very nice sculpts but just too big for me so I will be passing some of them on at the forthcoming Plastic Warrior show on 11th May.