The five horsemen with the standing poses shown front and profile.  There is another rider in the set, an officer, which is the same figure as the Dragoon shown here but with the right arm cut away and replaced with one carrying a sword.

Among the earliest 54mm plastic figures made in the UK (or anywhere else for that matter) are these Swedish Dragoons made by Malleable Mouldings circa 1946.  The majority of this firms figures were based on designs made by Eriksson and others for Authenticast in Eire but so far as I can ascertain these Dragoons were only ever part of Eriksson's own "Tennfigurer" range of connoisseur models.  The crisp sculpting of the original metal models has not  transferred well to these plastic versions which are crude with excessive flash around the split lines. This suggests they may have been made by compressing material into the mould in the manner of earlier composition figures rather than injecting thermoplastic into them as practised in the 1950's. 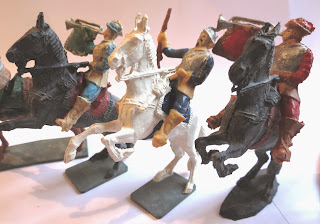 A closer look at the rearing horses showing the three different positions of the forelegs (there is a fourth combination: right leg tucked in, left leg out).  The horse on the right clearly shows the split line where the two halves have been glued together and the less common oval base.

The horses are hollow, being formed in two halves and then glued together, the rearing ones are all the same basic pose with the moulds being modified to alter the position of the forelegs, allowing them to offer four different versions.  The bases on these horses are all original, the square/oblong ones are just cut from plastic sheet while the oval one (which is much less stable) has been formed from the same plastic as the horse and glued on.  The horses all have a small pinhole in the saddle which I always assumed was to take a peg from the rider for stability but these are the very first examples I've found which still have the pegs on the riders intact.

Are they rare?  Well that's a very subjective term, too often misused to infer value, certainly they are hard to find but on the other hand they turn up often enough.  These chaps are in this post simply because I found them all together in a junk box at a local collectors fair recently.  For more information on Malleable Mouldings and the other plastic figure ranges made from designs by Holger Eriksson (SAE and Spencer-Smith) see the Plastic Warrior Malleable Mouldings Special Issue

If anyone should read this, I hope you had a peaceful Happy Christmas and I offer you my very best wishes for the New Year, whoever you are.