I don't, and I'm sure I would have done.  It was a sticker album full of pictures of famous battles with blank spaces where you inserted the the numbered stickers to complete the image.  It was published by Cox international of Antwerp and the text is in French, German, English, Italian and Dutch, there's nothing to indicate the date of publication but it does appear to have been distributed in the UK. 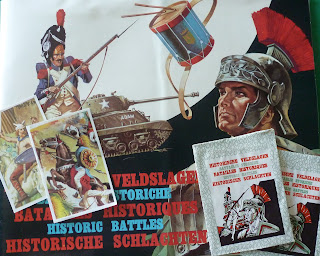 This is the cover of the album with examples of the stickers and the packets they came in, you got two stickers in each pack and you needed to collect 306 different ones to fill all the blanks.  Before the advent of the Almark and Osprey uniform books I used to rely mostly on postcards, cigarette and bubble gum cards for uniform info, and I would have loved this. 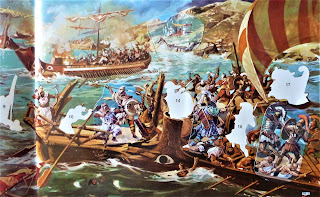 There are 17 Battles depicted and the  album opens with the Salamis then runs chronologically through to the Six Day War.  I think the illustrations are amazing, just the sort of thing I rely on to give me a bit of inspiration when the toy soldier spirit is flagging. 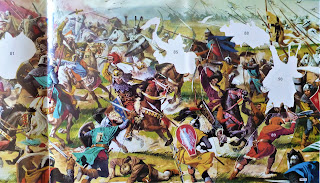 Each Battle covers a double page spread and I've endeavoured to get as much of each one as I could into the photo.  There are a few surprises among the conflicts included, this is Wahlstadt (1241) fought between the Teutonic Knights and the Mongols, I've never heard of it before. 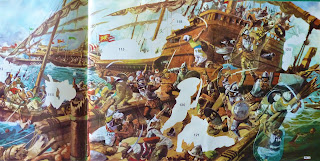 One of my favourites is Lepanto, shown above, but my absolute favourite has to be Adowa in the two pics below. 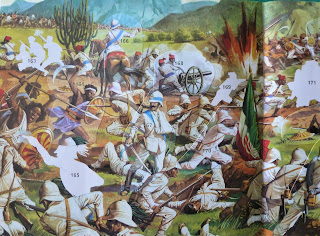 I heard about the album from friends in Germany where it's available quite cheaply still on ebay, I got 200 packets of stickers with it but still need about another 100 to fill all the blanks so there are lots of doubles. 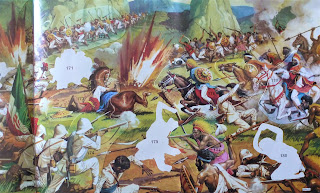 Peeling off the stickers and pasting them into the pages is a very therapeutic way to spend a few hours!
Posted by Brian Carrick at 12:29