Earlier this week I visited my erstwhile gaming opponent PW to trial the new C18th rules for 54mm wargaming he is working on and a jolly good fast running game it turned out to be.  Both sides had about 70 infantry, six/eight cavalry, two guns, two mortars and a gaggle of staff in command.  The terrain and buildings are in scale for 28mm figures but worked very well, they give definition to the landscape without imposing so much on the visual aspect or the space that larger items would need.  This is how it went: 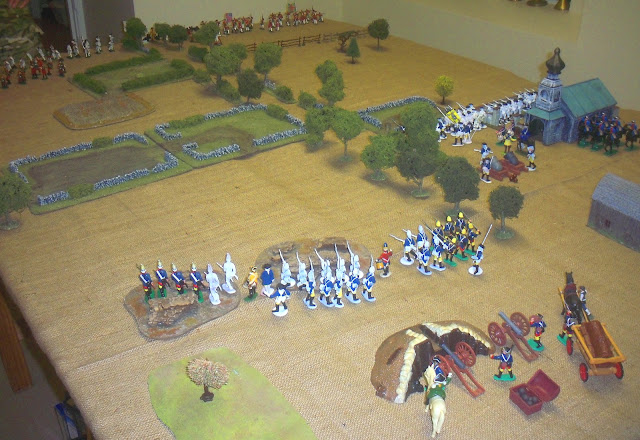 An overview of the initial dispositions from the Prussian lines.  In the left foreground a company of Grenadiers cover the flank of a Fusilier Regt. supported by two battalion guns.  On the right the Prussian command have established H.Q. in the hamlet and formed a strong defensive position with two Regiments of Line infantry, two mortars have been brought forward and a unit of Cavalry stand in reserve. 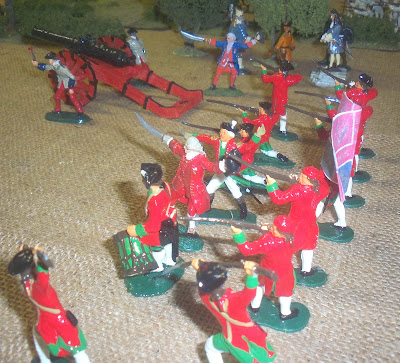 Opposing them the French begin to advance through the fields on either side of the road, on their left the Irish Dillon Regt. are supported by a heavy gun 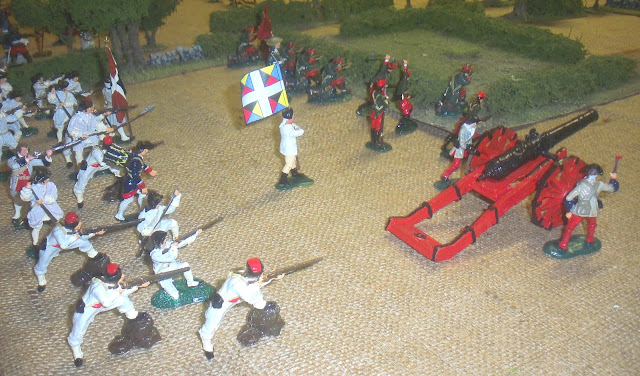 In the centre dismounted Dragoons form a skirmish line in extended order supported by an elite French Regt. and a second heavy gun. 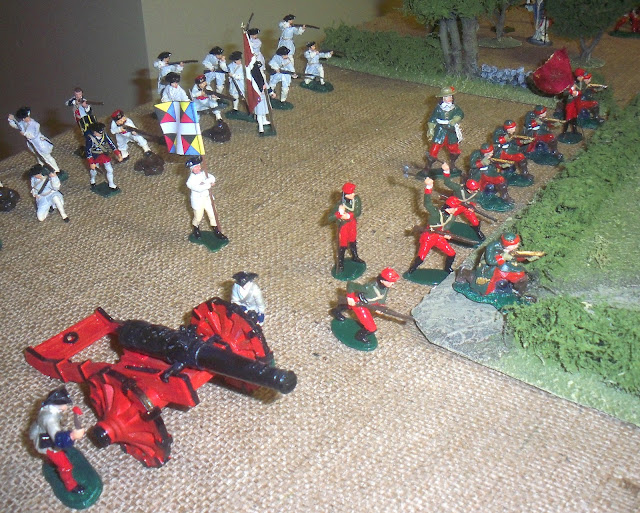 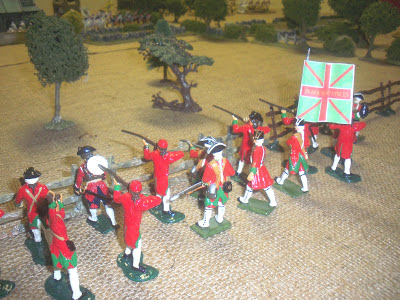 The Irish Regt. halt at the line of a picket fence where they take a hard pounding from the Prussian mortars 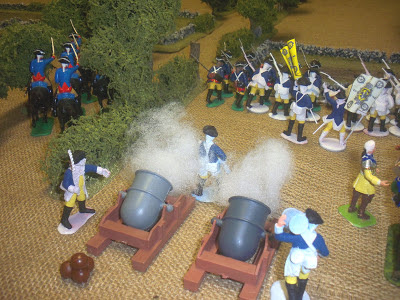 The Prussian regiments contain many recent new recruits resplendent in their pristine undress undercoat No.1 uniforms.  The cavalry unit have left the hamlet and moved to cover the gap between the Fusilier and Line Regt's. 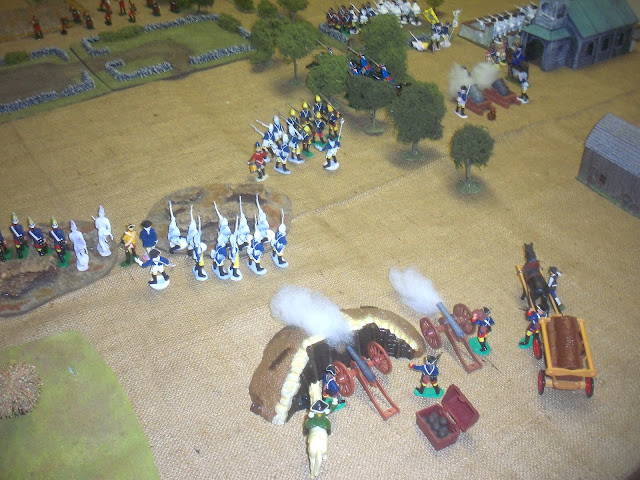 The French skirmish line has reached the low stone walls in the centre of the field and a battalion of Fusiliers move forward to extend the line but receive a strong volley from the enemy Dragoons and are forced to retire. 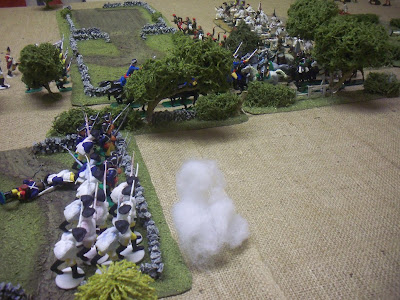 The Prussian cavalry race up the central road towards the French command but are countercharged by the enemy Horse.  The Prussian Line infantry have moved up in support. 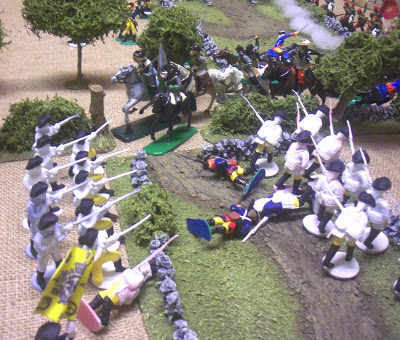 The French Horse brush the Prussian cavalry aside with devastating effect and career into the supporting infantry where they face close range volleys from the front and flank. 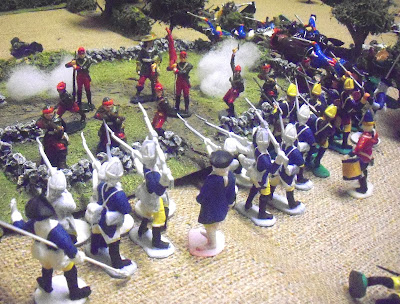 A general advance of the Fusiliers and Grenadiers on the left leads to a melee which forces the French to retire. 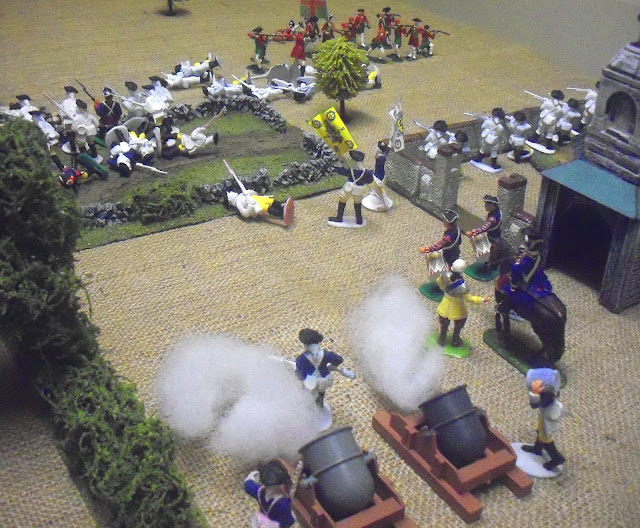 On the right the advance of the Irish "Wild Geese" is counterattacked by a brigade of Prussian Line, who pay a fearful price to buy time for the remaining brigades who prepare a volley which succeeds in forcing the Irishmen to retire.  At the end of the day the French showed their marksmanship and ferocity in melee to be far superior to the enemy but they were badly served by their artillery, while it is fair to say that the day was saved by the judicious siting of the Prussian guns.

Guns and infantry only fire every other move so wafts of smoke are placed in front of units that have fired to indicate they are reloading next move, this gives the attacker a chance to close with the enemy without being massacred.  Artillery shots are taken using ball firing cannon, wherever the ball hits it ploughs a file through the enemy line.  Infantry fire is simulated by firing a matchstick dipped in ink at a paper template of an infantry line to determine casualties, it may sound a bit messy (and it is) but it's more tricky than you'd think and it's a lot more fun than continually bowling fist fulls of D6.
Posted by Brian Carrick at 14:39