The mid C18th game begins to look like a campaign.

Earlier in the week I set the scene for the next play test of the 54mm C18th wargame rules, this time a Hanoverian army were offering battle so the storyline was altered a little: Having previously seen off the French Army Lilly White, the Frederickians have rushed to intercept "Pragmatic" Army Red, while they are strung out on the march, and prevent them linking up with the remains of the Lilly Whites. 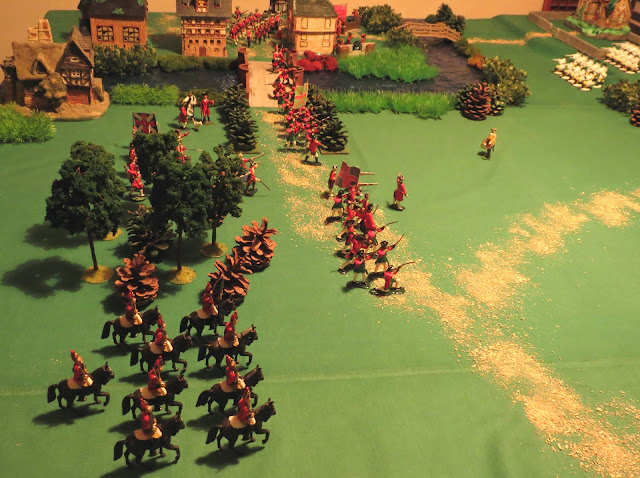 The opening move sees the "Pragmatic" Army marching into the safety of a strongly defended town but a forced march by the Frederickians on a convergent road threatens to cut them off so they prepare a rearguard action to hold the bridge open. 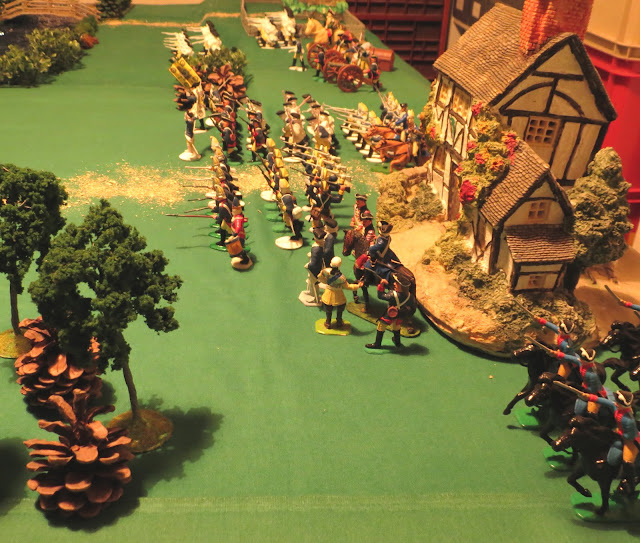 The Frederickians deploy, cavalry on the left, infantry centre and right, guns on the heights by the old churchyard. 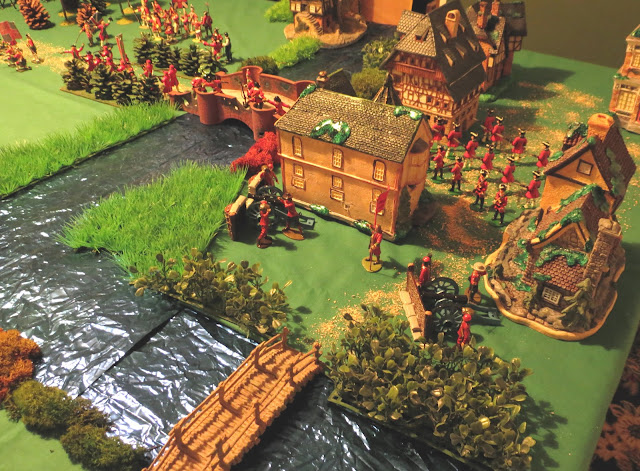 The town nestles in the bend of a wide fast flowing river, the banks are broad and marshy, the main road crosses a sturdy stone bridge and turns into the town square, a small track leads out of town over a rickety trestle bridge up to the church on the hill. 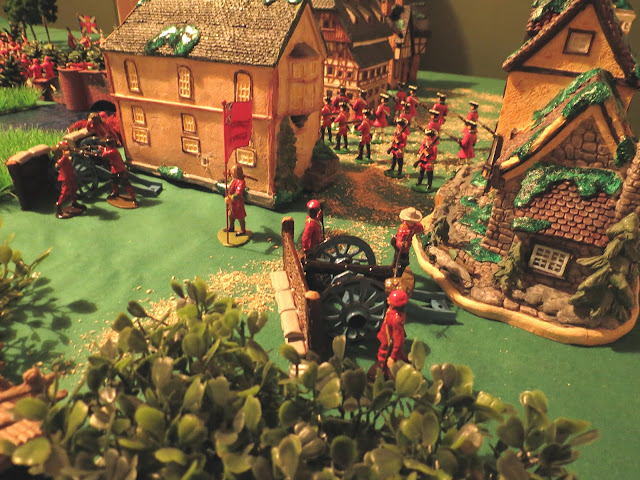 A hasty reconnaissance shows the town is well prepared with entrenched guns covering both bridges and a wide field of fire. 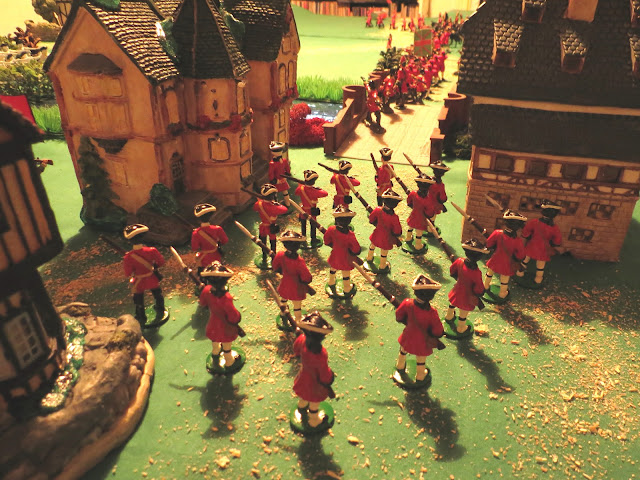 The garrison hastily stand to as the shout goes up "the Frederickians are upon us!". 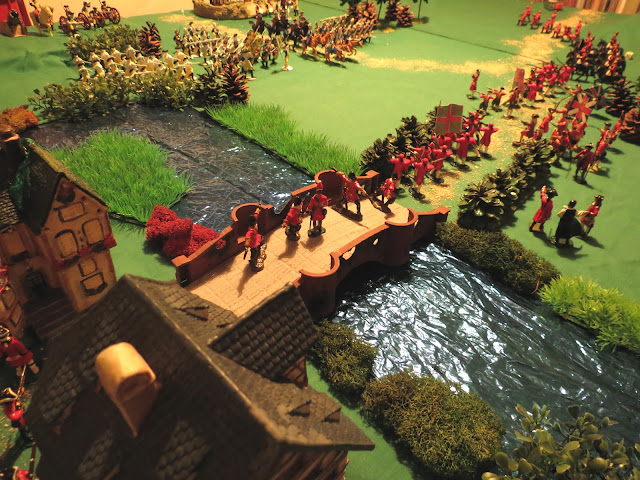 "Pragmatic" Army dragoons take up position on the bridge while two regiments of infantry stiffened by a composite battalion of grenadiers form up to hold the road open.  Further out, two regiments of horse and another of dragoons hurry towards the bridge. 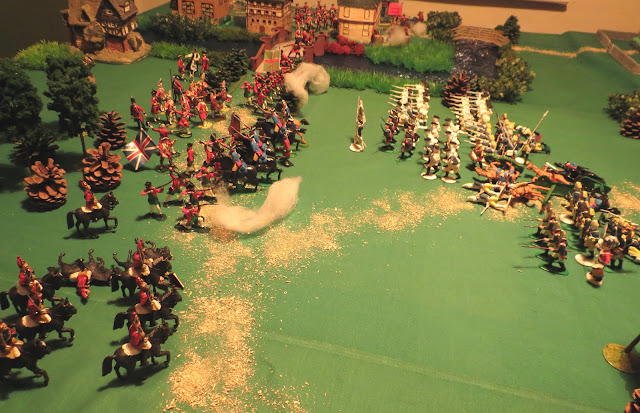 Five regiments of Frederickians march in oblique order across the face of the enemy to concentrate against the two regiments holding the road, while their cavalry wheel to the centre and charge home on the "Pragmatic" line. 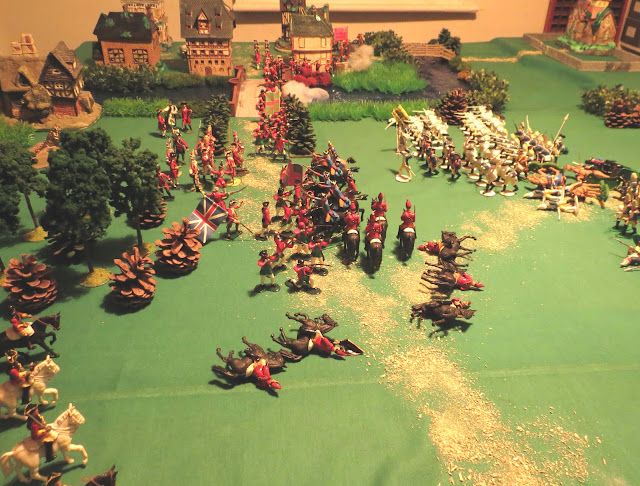 Enfilade fire from the guns across the river drill through the Frederickian lines with devastating effect, further punishment is inflicted by volleys from the line, the bridge and the garrison.  The cavalry charge breaks against the "Pragmatic" line and is countercharged in flank by a regiment of their horse. 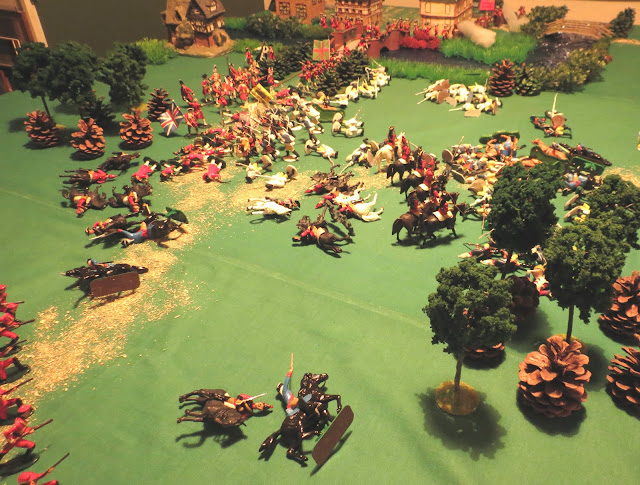 The Frederickian infantry reach their objective but an entire regiment lays shattered in the fields behind them.  On the right there are not enough troops to effect a breakthrough and the attack collapses, in the centre two regiments fall upon the remnants that have just withstood the cavalry charge and wipes them out, on the right the regiment of fusiliers turn aside to face the second regiment of  "Pragmatic" horse who are closing in from the flank.  A volley fails to see off the horsemen and after a short melee the fusiliers are overrun. 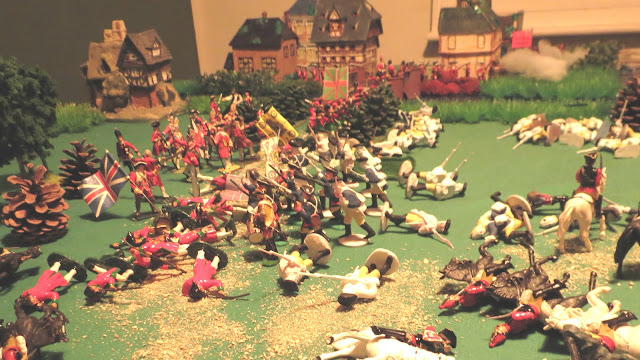 The final scene of carnage, both sides have fought themselves to a standstill but with only one regiment still intact and fresh enemy troops approaching, the Frederickians beat a fighting retreat.  Watching the defeat unfold the King exclaims "Teufel! I need more men" before quiting the field and sending off gallopers to call up the regiments from his Eastern Provinces, hire mercenaries and call in the pledges from his Allies.  "A battle is lost but the fight goes on!"

Ahh the joys of wargaming with larger scale toy soldiers rather than just leaving them to gather dust on the shelf!
Posted by Brian Carrick at 14:20