Yesterday I trollied off to the London Toy Soldier Show, I don't care for the commute into Town at the best of times but have to admit that I felt a little uneasy navigating the London Underground in the wake of recent events in Paris and elsewhere.  However, we can't let such fears dictate our lives and I was in desperate need for a fix of plastic and metal, so here are a few items that aroused my curiosity. 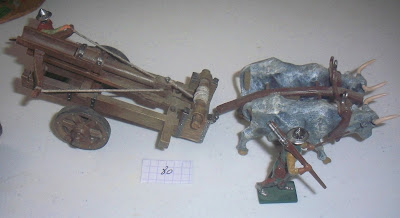 The idea of transporting medieval artillery is something which has rather slipped below my radar so I was quite amused by this piece, although not amused enough to pay £80 for it.  Somewhere or other I'm sure I have a spare set of Marx bullocks, from the remould western waggon, harnessed up like this which could be pressed into such service. 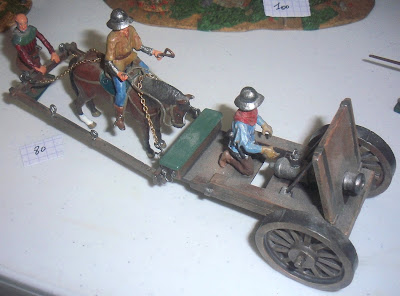 This one I really liked but I'm not sure how feasible it would be for that horse to push the gun forward like that, what do you think?  I didn't get a note of who made these two but they have given me some food for thought on future scratchbuilding. 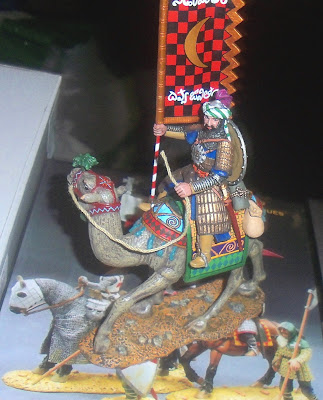 This King & Country stuff has to be admired but is way out of my budget (at £120), still, more food for thought and I know I have plenty of Britains camels and spare Saracens knocking around. 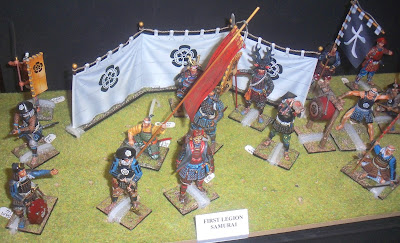 A Samurai group by First Legion, nice to see the armour details and colours, another project I've been squirrelling away the figures for and must get around to basing and painting (maybe over the holiday period)

So what did I get?  well quite a lot really but mostly figures from the junk boxes for conversions rather than collectable items and a small hoard of catalogues from an old timer who was having a clear out, more of this anon when time permits.