Battle of Hook's Farm on a sunny afternoon

Last weekend in the amiable company of friends M and A I played my first wargame of the year, and it's only September so plenty of time to catch up!  The biggest problem with playing garden games in the UK is the unpredictability of the weather but on this occasion mother nature was kind to us.  And so it was that Armies Red and Dark Green should should come to face each other across the fields for possession of Hook's Farm, conduct of the encounter to be governed by the International Conventions of Funny Little Wars etc.etc. 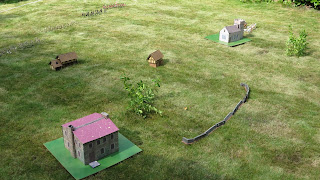 An overview of the field, Hook's Farm in the foreground, the Cottage and Hovel behind it, while to the far right is the picturesque Firely Church.  The lush pasture is dotted with clumps of woodland and in the centre some light cover has been provided courtesy of a stone wall. 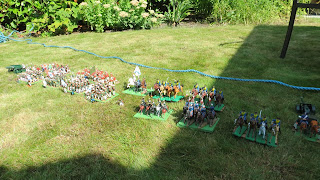 The aggressors have crossed the border and make their ponderous way forward. 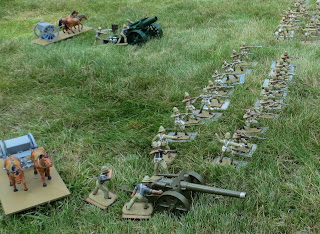 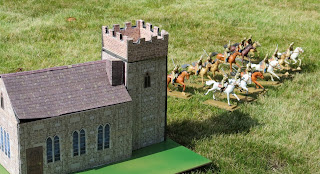 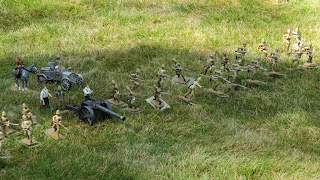 .....while the infantry and guns cautiously advance in fine order. 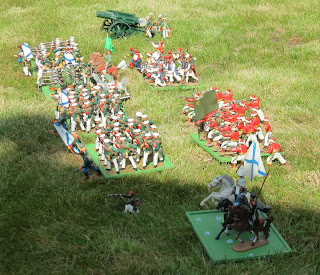 Green's army of conscripts are cajoled forward followed by their Allies from subject nations, a little bewildered to be here but enjoying their fancy new uniforms none the less.  A solitary sniper detaches himself from the column to search out targets while the General Staff raise a cheer and wish him "Good Hunting" 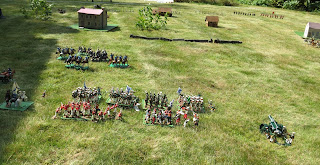 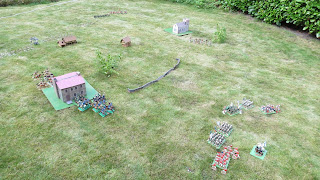 Red and Green cavalry jostle for posession of the Farm 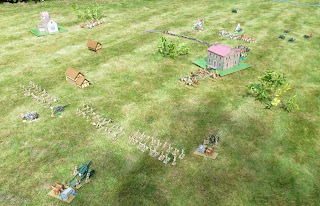 While on the right, Red cavalry erupt from behind the Church and Green manoeuvres to refuse the flank.

It's all to play for.  Next episode... who will draw first blood!