Continuing the tale of the Great Game, in which Armies Red and Dark Green come to blows in a 54mm garden wargame: 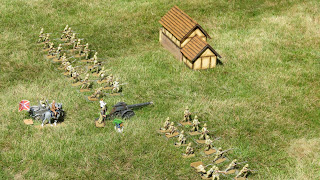 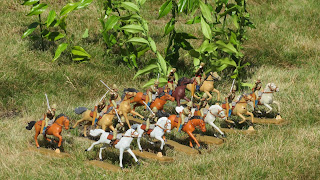 .....while their cavalry sweep around Firely Church to threaten the Green flank 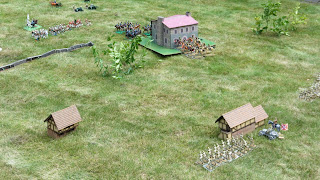 Scene from behind Army Red's lines, the Green artillery has opened up and Red's cavalry take the first hit. 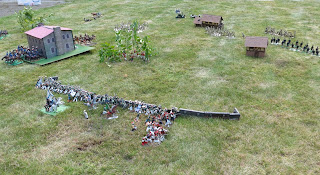 Green reaches the safety of the wall while the artillery bombardment continues but with little effect. 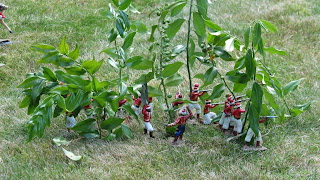 The Slavic Regiment move forward into the woods to form and enclave in the centre of the field......but then suffer a direct hit from their own artillery and beat a hasty retreat back to the safety of the main line. 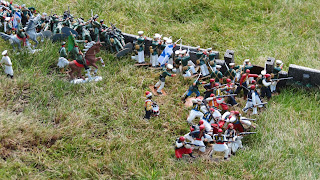 Army Green infantry and elite Rifle Regiment extend their firing line along the wall while the Balkan League cover the flank against the threat from Red's cavalry. 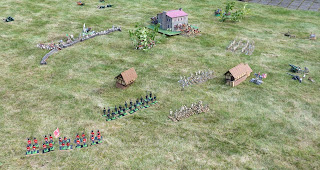 Green becomes pinned to the Farm and along the wall, they lose the initiative and Red begins to close in from all sides. 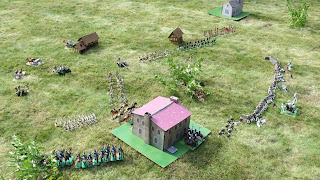 With pressure mounting on both flanks Green attempts a sortie in the centre but it is beaten back. 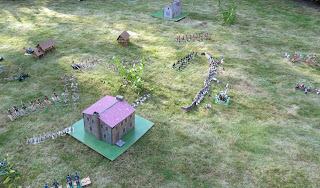 On the left flank Red's cavalry sweep around and overrun the heavy howitzer but not before the brave bombardiers spike it by blowing out the breach block to prevent it's capture. 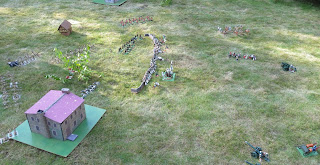 Red's riflemen assault the wall and meet a withering fire which throws them back but their action has enabled their elite Guards Regiment to turn the flank and roll it up.  With the situation rapidly deteriorating the Army Green General Staff gave orders to spike the remaining guns and withdraw in order.

So ended a very pleasurable Saturday afternoon, the game was played in an area roughly 26' square with 120 foot, 25 mounted and 3 guns per side, a classic game played in the true Wellsian manner.