The Romanians are coming!

Plans are afoot for a wargame set in the Crimea during WW2 using 54mm plastic toy soldiers, it's a way off yet but it will still need a bit of preparation.  Fortunately the game will require little in the way of air and armour units, but it will require some Romanian infantry and I can't think of any firm that made such troops, therefore some sort of bodge is called for. 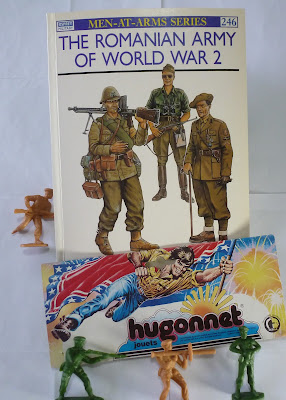 Taking the Osprey book as my source for uniforms I trawled through the mountain of junk figures I keep for such purposes and came up with several bags of these Hugonnet figures.  I bought them for a few francs a bag in a supermarket, on a booze cruise to Calais forty years ago, and they have been languishing in the back of a cupboard ever since waiting for me to come up with a use for them.  I've included the header card from the bag which shows the Hugonnet/Feral logo quite nicely in the bottom right corner.

The Romanian uniform comprised a full length jacket and short gaiters, so we're okay on that score, Mountain Rifle Regiments wore a large floppy beret, so that's good too.  Only problem is with the regular infantry units who wore a variety of helmets including the French "Adrian" and Dutch models, I have some metal heads in Adrian helmets so could do a few quick swops for a bit of variation but the current helmets are fairly indistinct so I may just leave them as they are. 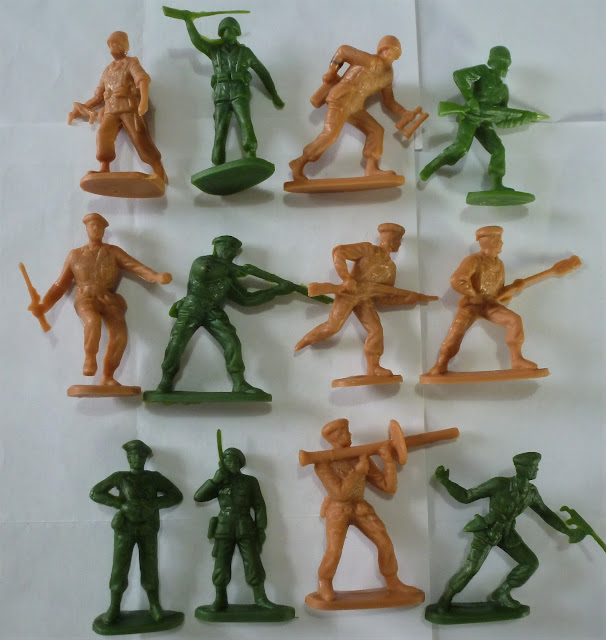 Here are all the poses, Hugonnet were notorious for making piracies of other firms figures, mostly Starlux but also Cofalu and Cherilea.  The first three figures in the top row are copies of Starlux and the rest are all copies of Cofalu modern French army toy soldiers.

Moulded in green and tan these are very much the French equivalent of "Army Men" cheap toys in plastic, colour coded to provide two distinct armies.  They are crude, anatomically challenged and badly moulded, many carrying the deformity of being injected into an overheated mould.  But for all that I have a certain fondness for them, the poses are very dynamic and I've always felt they had potential, I just never figured out what that might be.  Well, we'll see.....