I'm about to embark on a new project which involves painting up a load of Cossacks, happily there are lots of figures available thanks to the current Russian manufacturer Engineer Basevitch who has included several in his many excellent and unusual sets.  The problem is that I want them to be a generic unit that can be used from 1800 through to 1930, so what colour do I paint the tunics?  When in doubt I always look at what the toy manufacturers have done in the past, not always historically accurate, but good enough for me and with that in mind I dug out my old composition Cossacks made by TAG. 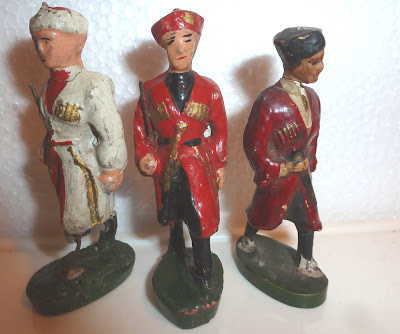 The figures I'll be painting are all wearing the distinctive cherkesska tunic with sown in cartridge pockets like these above.  The first two figures here are TAG and I assumed the third one was too when I bought it, but when I put them all together I see it's very different, obviously shorter with finer detail and made from white plaster, it's very TAG in style so it could be a later improved line of production but I'm just speculating here. 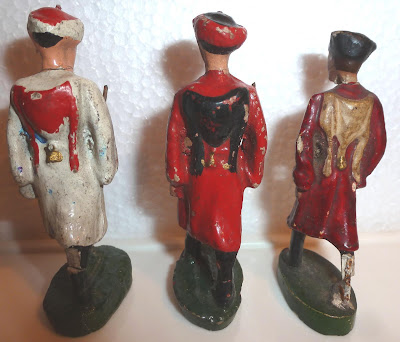 I've never been entirely sure what this thing hanging on their back is meant to be but I assume it's meant to be a traditional bashlik hood.  I'm not sure this exercise is helping with my uniform colour quandry! 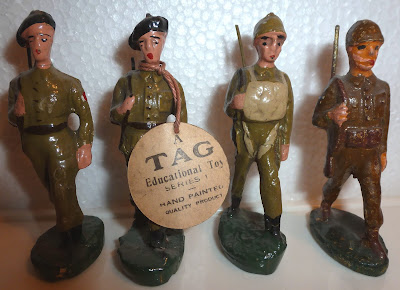 While I had the Cossacks out I thought I might as well photograph the rest of my TAG figures,  These are curious creatures, made in England after WW2, but beyond that nobody seems to know much about them or who made them, the only clue being the large "dogtag" they wear tied around the neck which proclaims them to be "A TAG Educational Toy".  From left above are 2 Royal Armoured Corps, a paratrooper and an infantryman.  I've always been curious, on what basis TAG could claim these to be educational? 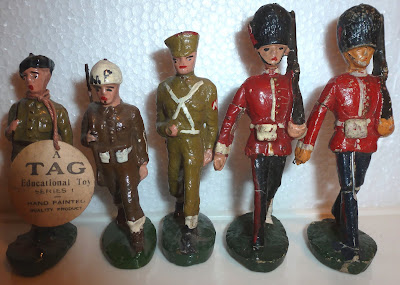 Mostly they're made from a green/grey composition material very similar to Milliput which put me in mind of the gunk people used back in the old days to repair the rusted patches and rotted wheel arches on their car.  Other materials such as plaster are also used.  I think the MP in white helmet is just an ordinary infantryman who has been embellished by a previous owner, I'm not the culprit on this occasion but I have to admit to ruining many a good toy soldier with dodgy painting in my schooldays.  The center figure is a British Military Police "Redcap" (factory painted) followed by two rather robust Guardsmen. 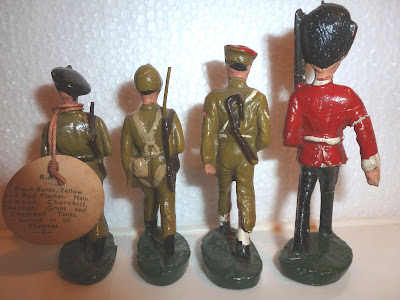 The reverse side of the "dogtag" gives unit information.  I wouldn't normally bother showing a back view but on this occasion I was quite taken with the detailing of the parachute harness and sten gun slung on the MP, it shows a modicum of research and modelling on what are otherwise very crude toys.  I've never consciously collected TAG figures, I don't really like them and I'm not even sure how I came to have these.  I guess you just acquire the odd figure here and there then before you know it a collection has quietly crept up on you.