Way back in January I made a New Years Resolution not to start any new Little Wars converting projects until I had completed the ones that were already in progress and , unusually for me, I stuck to it - well almost.

For a couple of years now I have been building up Russian and Turkish armies of the "roughly" 1880's period based on pictures of Heyde solid lead 45mm toy soldiers in the book Bleisoldaten by Hans H. Roer (sadly long out of print).  I came to this period because it's a bit different and exotic, nobody was making the figures at the time so it gave me scope to do some simple conversions which would provide a very personal collection and I like the idea of late 19th century armies slugging it out on fairly even terms (I had long since done the ACW to death).  I started the project with what I consider to be the tedious part of building wargame armies which is knocking out bog standard units of infantry for both sides, that done (along with a bit of cavalry) by this year I am down to wrorking on staff, a bit more artillery and whaterver takes my fancy, this is the fun bit for me and it will probably be ongoing to a certain extent for some time to come. 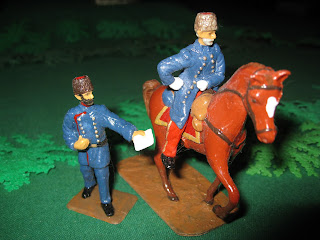 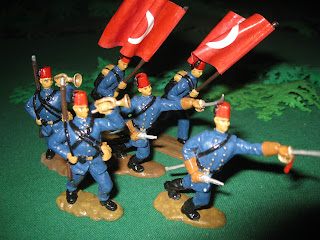 Turkish command groups, made as above with Britains Herald figures for the officers and buglers, BMC for the standards. 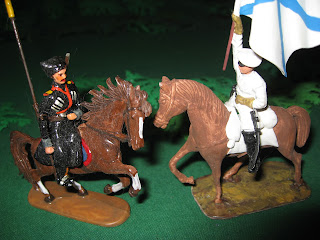 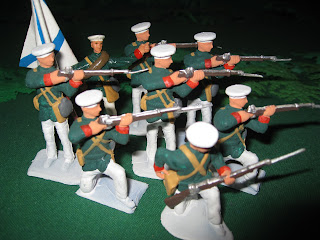 Russian staff and some additional infantry to bring existing units up to strength, these are still WIP. 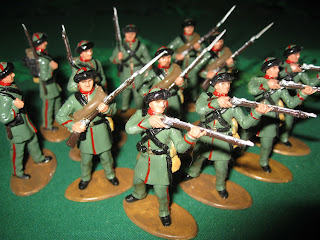 Russian riflemen from the Caucassus 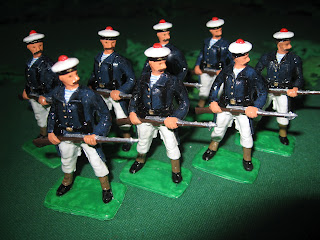 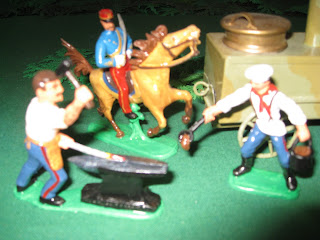 French ADC with some generic support troops, a cook and a blacksmith.  I plan to make more support troops in shirt sleeve order with blue trousers striped red, the idea being that they can then be used with any national army rather than have lots of duplication. 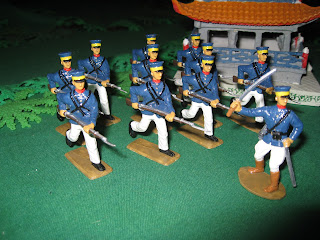 A project that's been too long on the back burner for me are Japanese troops circa 1905, I plan to move these up the to do list in 2012. 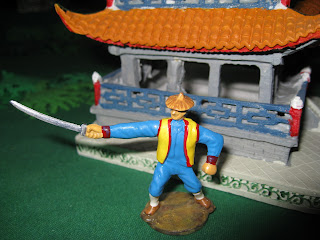 Chinese have never featured as a project for me but I think that will change in 2012.  New Years Resolution for 2012: forget about existing projects, just do stuff for fun but do lots more of it.
Posted by Brian Carrick at 16:19