I had intended to buy James Opie's new book " Collecting Toy Soldiers in the 21st Century" at the London Toy Soldier Show a few weeks ago, where for the cover price of £30 I would have recieved a signed copy direct from the hand of the author.  However the fates decided that I should not go and therefore I have obtained an unsigned copy courtesy of Amazon for just over half that price (how can they do that when it's brand new?). 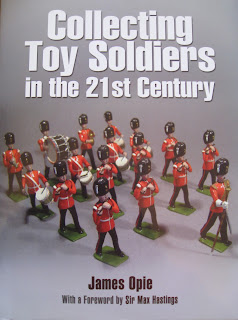 Published by Pen and Sword books Ltd. ISBN 978-1848843738, 207 pages fully illustrated in colour throughout.
This is a follow up to James' previous book "Collecting Toy Soldiers" which he wrote 25 years ago and sets out to reflect on the changes in the collecting environment during the intervening period.  And what a lot of changes there have been, the whole demographic of collectors has changed as the older hollow cast lead generation have given way to the baby boomers of the 1950's and 60's plastic era.  Also there has been a boom in availability of figures through shows and the internet, a feast of information through magazines, new books and blogs, and a veritable renaissance in manufacturing both plastic and modern metal collectors items.
Getting back to the book it's very much a gentle guide through Opie's personal collecting history and his philosophy of what makes a good figure, how to build a collection and how to wind down from it.  That last aspect is rather new territory for me but being a near contemporary of the author I found the concept of "how to stop collecting" strangely compelling as it's something you start to think more about as you get older.  I'm going to shut up now because I'm getting boring, it's a very good book crammed with great and unusual pictures of toy soldiers and I would very hapilly have paid the very modest full cover price for it had not Mr Amazon intervened.
Posted by Brian Carrick at 13:43