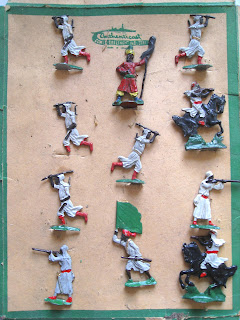 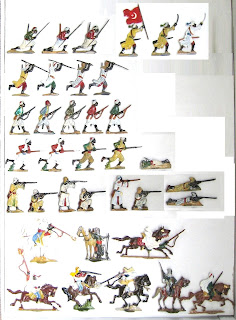 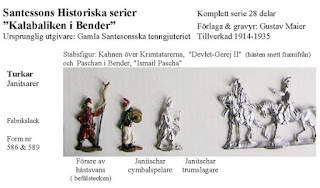 Hans also discovered the origin of the standard bearer, it is a Turkish Janissary from another set by Santesson depicting the 1713 Skirmish at Bender, an action from the Great Northern War which I had never heard of but which would make a great wargame scenario.  Finally Hans sent me a link to the Swedish Toy Soldier Club website which shows early Swedish 40mm semi flats as well as some 54mm figures by Holger Eriksson and another of the Authenticast sculptors, Lennart Norrke.  Here is the link http://carolinen.se/home.htm the site takes a bit of navigating but it is well worth it, from the menu list on the left hand side click on "Galleri" then on "Aldre tennfigurer" for the 40mm and "Rundmassiva figurer" for the HE/LN figures.  If you have an interest in old waterline model ships, 40mm semi flats or want some inspiration for Funny Little Wars armies you'll find plenty to interest you here.
Posted by Brian Carrick at 13:00