Last weekend, the 27th/28th April, a diverse band of toy soldier enthusiasts were drawn together in the Surrey countryside, it wasn't a wargame convention or a collectors show but more a celebration to mark the 100th anniversary of the publication of H G Wells' book Little Wars.

The event had been at least two years in preparation and was the brainchild of Mr Paul Wright, author of "Funny Little Wars" (an updating of Wells' rules to take account of small arms fire, morale etc.) ably supported by members of the Funny Little Wars Yahoo Group for chaps who enjoy playing with larger size toy soldiers.

The event was split into three rounds, each with four games being played simultaneously.  First up was a staging of Wells classic Battle of Hooks Farm, which had to be played indoors due to rain, and here is what the armies looked like:  (click to enlarge) 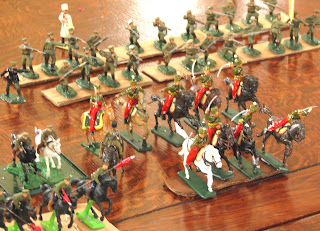 The Russian contingent (Army Green) commanded by Dr Mike Snape, the infantry are by Armies in Plastic (AiP), the cavalry converted from Britains show jumping riders and Italieri Mamelukes. 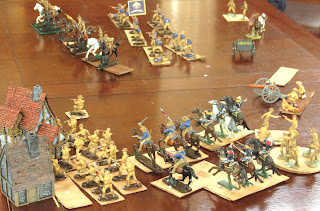 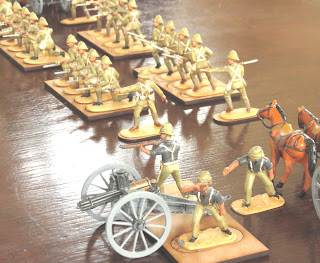 Dr Anthony Morton offered us his Army Red/Khaki, The British Army in overseas order, most effectively formed up on movement trays from Warbases (note to self: must get some of these)

By the unanimous vote of all present this Teutonic Army Black won the "Best Painted Army" prize for Mr Stephen Thomas.  More AiP infantry, traditional Britains 4.7s and elephants!   Well who wouldn't vote for them. 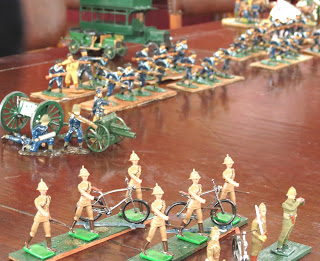 The composite Imperial Force comprising RN blue jackets, Canadian Horse and these rather splendid cyclists under command of the Duke of Tradgardland aka Mr Alan Gruber 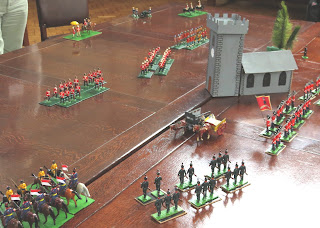 Here we see Army Red face up against errrrrrr.... Army Red?  At the far end of the table a satisfyingly nostalgic collection of old Britains and other hollowcast figures from Messrs Julian Spilsbury and Andy Hussey advance toward a solid red line of the Little Wars Revisited range of figures produced, and commanded here. by Mr Mike Lewis. 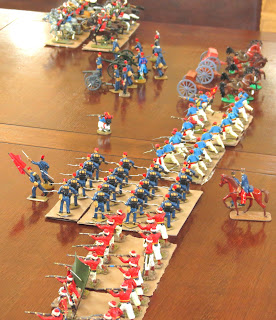 ........And finally my own humble contribution to the proceedings, the steadfast Turks of Army Turquoise.  the central column and artillerymen are my conversions from BMC American Civil War figures while the flanking Regiments and cavalry were fashioned from HaT figures by the skillful hand of Canadian veteran gamer Mr Ross Macfarlane
﻿
One army is missing from the lineup above; the Forbodians of Mr Tim Gow who was charged with assisting to umpire the first round.
Posted by Brian Carrick at 07:24