Available at the Plastic Warrior Show a couple of weeks ago was this new book on two major French manufacturers: Cyrnos and JIM (Jouets Incassables Modernes en Matiere Plastique).  Once you get past the major Marques of CGB Mignot, Quiralux and Starlux, French made figures in all their metiers are notoriously difficult to identify, they carry little in the way of markings, while packaging, advertising and catalogues hardly exist (compared to the plethora of material surviving for U.S. British and German makers) and so this book is much overdue and greatly welcomed. 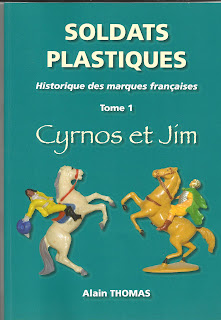 
Written by Alain Thomas who is well known for his previous three books on Starlux which were written in collaboration with Jerry Meimoun, I couldn't see any ISBN number so take it to be self published, as is increasingly the case these days.  My copy cost me £25, I think you can buy it a bit cheaper direct from the author but then you have to pay postage so it all works out even in the end. 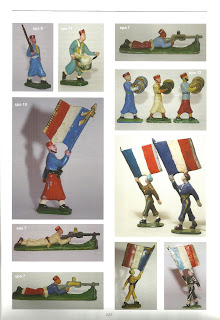 The text is only in French but it is very easy to follow even if you have very basic language skills (like me), as always with such books they are all about the pictures and this one does the job admirably as you can see from the sample page above.  The first 70 pages concern JIM and the remainder are devoted to Cyrnos, each section follows the history of each company from aluminium into plastic figures, how to identify them and then a pictorial cataloguing of their various ranges.  Both companies products are common enough in France but don't appear to have ever been exported so have only become known outside their mother country in recent years through the more International collectors shows or the ever present ebay.  This book is well researched and beautifully presented, the figures of these two companies deserve to have a much higher profile on collector's radar and I understand that this may be the first in a series of such publications on the lesser known French manufacturers.  Highly recommended.
Posted by Brian Carrick at 07:35