The sun came out for round two of the H G Wells Little Wars Centenary Games and so we all decamped to the garden for some proper wargaming!  The scenarios for the second and third rounds came from Colonel Monseneurgue's 1913 work "Cavalry Practical schemes".  In true Wellsian fashion each side was designated as Army Red or Blue regardless of the national army they represented and each side was given sealed orders and objectives.  In game 2 Army Red had troops posted in woods at either end of a central road which it had to hold until reinforcements could come up, Army Blue was an advance guard required to clear the woods, secure the flanks and open the road  for it's Army Corps to pass through.  Here are some pics: 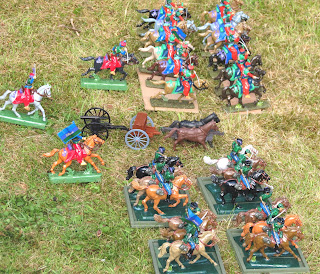 The Forbodian Horde commanded by TG, missing from the lineup in the previous post, took to the field for round two in place of the Turks as I was drafted in to co-umpire this session. 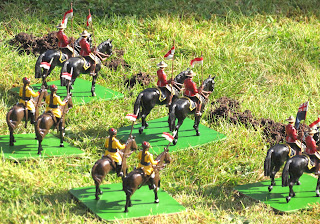 Bastions of Empire, the Mounties and Skinners Horse stand firm ready to do their bit. 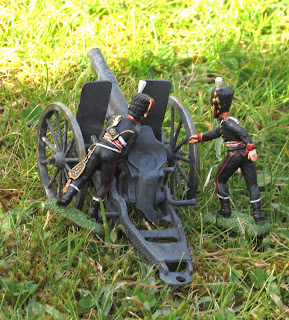 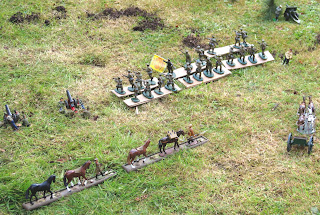 A rather neat Russian Mountain Battery takes up position 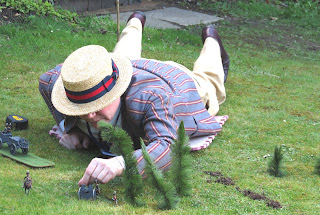 In typically Wellsian pose ST draws a bead on the enemy cavalry.

The second round came to a close as dusk closed in and after a hearty toast to all concerned the Gentlemen were lead on an Historical Tour of the Old College before retiring to change for dinner.

Sunday Morning saw hostilities resumed after breakfast, the final scenario introduced hidden movement and finds Army blue holding a major road with two entrenched guns, facing two regiments of Red infantry with two guns.  The remaining Blue forces are hidden behind the tree line while Red is moving unseen around the flanks, the game is afoot: 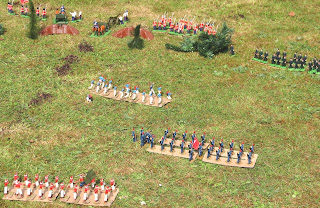 At the start of move two, Red's guns have moved into the positions vacated by Blue's artillery and their infantry find Blue retreating in echelon.

Blue's secret orders are to withdraw from this exposed position and beat a fighting retreat back to hold a second line along the next treeline, but above all they must save the guns!  Red's orders are to prevent the guns getting away.  A number of dummy markers were used by both sides to cause confusion as the troops moved into open sight. 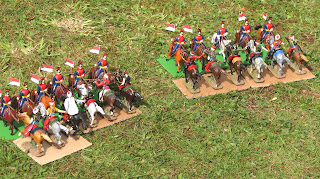 On the left flank Blue's cavalry charge Red's lancers who are threatening the withdrawal of the guns.  Blue wins the melee and the guns continue on their way.

Just to add a little spice the Umpire now issued additional secret orders to both sides, Red was to bombard the South West area of the field (which just happened to be empty) while Blue was to counterattack to the North East of the field. 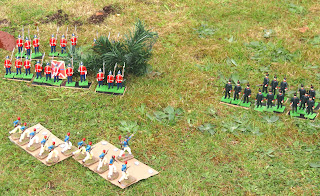 The almost suicidal Blue counter attack to the North East goes in and succeeds in pushing the Red flank back, blunting their advance and enabling the Blue guns to consolidate their new defence line......  just as play stopped for lunch.

And so a most enjoyable weekend of wargaming came to a close.  It was interesting to play the games on table and in garden consecutively (albeit with distances reduced for the table), although they are the same rules the dynamic of the game becomes very different.  Machine guns and snipers featured heavily in most of the games and added greatly to the challenge, the artillery was all matchstick firing and the standards of accuracy generally left much to be desired!

Overall Winner of the Competition was Dr. Anthony Morton, the title of Most Gentlemanly Player was conferred upon Mr Jack Wright and as previously mentioned Best Painted Army went to Mr Stephen Thomas.

Since my return, time has been much taken up with finalising arrangements for the Plastic Warrior Show but more of that anon.
Posted by Brian Carrick at 18:35