A short break immediately after the Waterloo 200 wargame afforded me the time to reflect on so many toy soldier projects started then left in limbo for one reason or another, so I started a list with the intention of getting some of them completed on my return home.  Top of the list was a Viking warband, which has been sitting based and undercoated in a drawer for yonks, influenced after reading Bernard Cornwell's Uhtred of Bebbanburg novels, these chaps are intended to double up as Celts/Barbarians to oppose the Roman Legion I started several years ago. 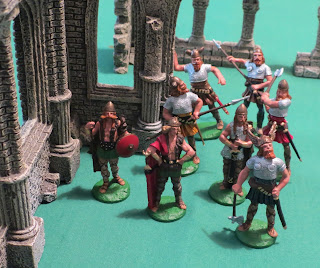 I painted all of these up yesterday and very pleasant it was to have a break from uniform Regiments of Napoleonics or Frederickians.  The chap with the shield on the left who looks like he's eating a squirrel will eventually be the standard bearer when I print up an appropriate flag for him.  Mrs C is of the opinion that the Cherilea figures on the right are in the same poses as the male models that featured on knitting patterns in the 1950's, I suppose that might explain why they're wearing chain mail "tank tops" and Madonaesque bullet bras!

Anyway, the reason for the title of this post is pure serendipity, as I applied the last touch of paint to these figures this morning I opened my newspaper to read that Bernard Cornwell's Uhtred novels are coming to the telly, in eight episodes, produced by the same firm that brought us Downton Abbey and airing in the UK on 22nd October (also on BBC USA but I don't know the dates)

Here's the preview :    The Last Kingdom