At the weekend Anthony and I got together for our fourth game using the One Hour Wargame rules. Flushed with the success of our Napoleonic game we felt ready to take the next step and devise our own scenario, I chose to base it on the First Battle of Smolensk in July 1941.  We aren't sticklers for accuracy but do want the thing to feel right so the Germans had to be light, fast, hard hitting and cohesive while the Russians would be steady, solid, and hard hitting but uncoordinated. It's been a long time since I've played a  WW2 wargame with 54mm toy soldiers, here's how it turned out: 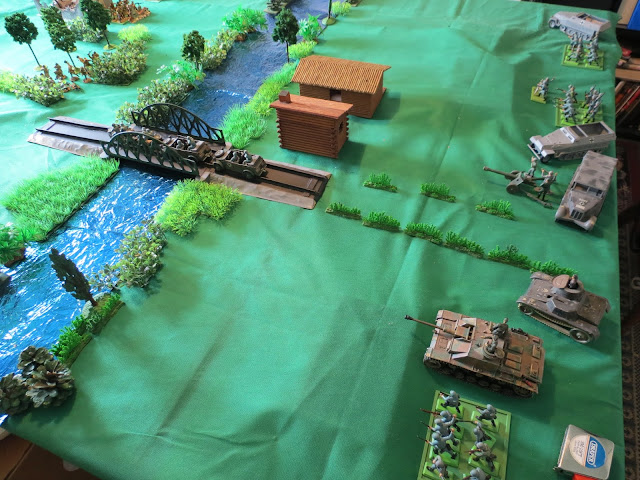 The German motorised units deploy to force a bridgehead across the river Dneiper. A reconnaissance unit dashes across the bridge, supported by elite assault troops, heavy and light tanks, antitank, mortar and two infantry units. A total of eight units, see note at end of post for further explanation about troop types. 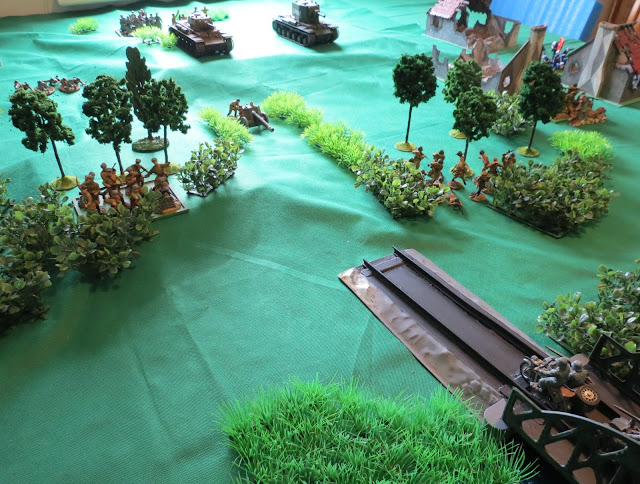 The Russian defenders lie in wait; on the left, infantry in the woods backed by a unit of heavies, blocking the road to the bridge is an antitank gun, behind it KV1 and KV2 tanks are hull down on the hill, behind them the Guards division is held in reserve and the mortars await firing instructions. On the right two more units of infantry and two of navy have take up position in the woods and ruins of the city's suburbs. A total of 12 units. 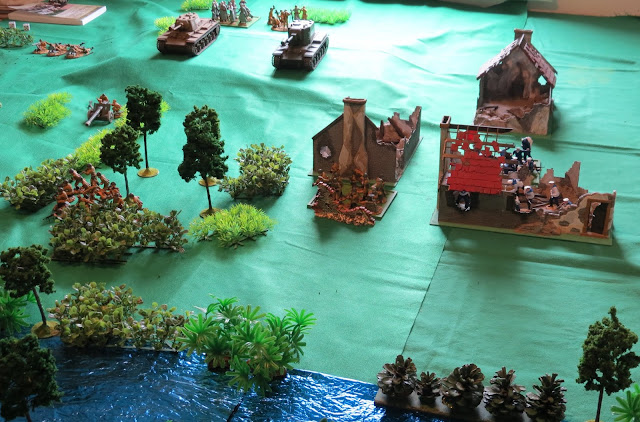 A very strong position with defence in depth, the winner will be whoever holds the hill (where the tanks are stationed) after 15 turns.  In the actual battle the Russian forces put up a strong fight with fierce counterattacks but a weak command structure meant that they were poorly coordinated, to represent this we used the Shambolic Command rule (see here) so that the Russian Commander could only move or fire up to four units each turn. 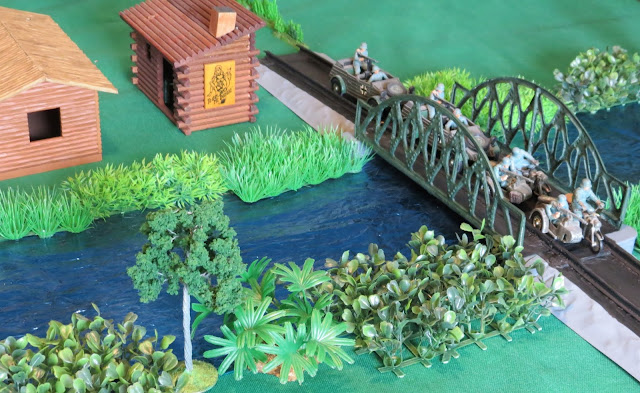 The bridge is a vintage tinplate railway piece made in Germany by Gebr. Bing (Bing Brothers) around 1900, these usually sell for about £60 but this was in such poor condition I got it for £1 (about 20 years ago) I finally got around to stripping and repainting it for this game (there's nothing like a deadline to get things done). I painted it as a road bridge because the rail gauge is too large to go with the British made Triang railway tracks that I have.  The wooden western town buildings represent a peasant village or dacha (or something like that) 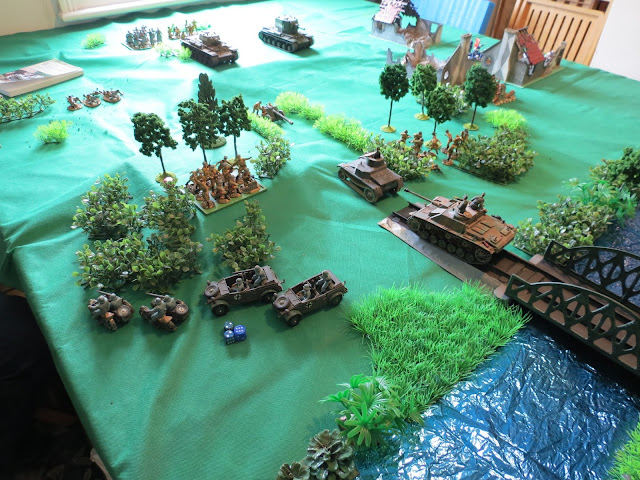 The badly mauled reconnaissance unit veers off the road to make way for the Pzw II and Stug following in support. 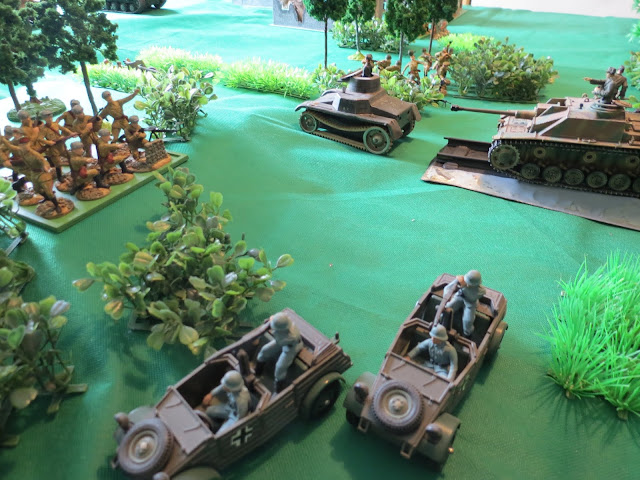 The Pzw II is a vintage piece made in Germany during the 1930's by GAMA, I thought it looked right at home in this setting. 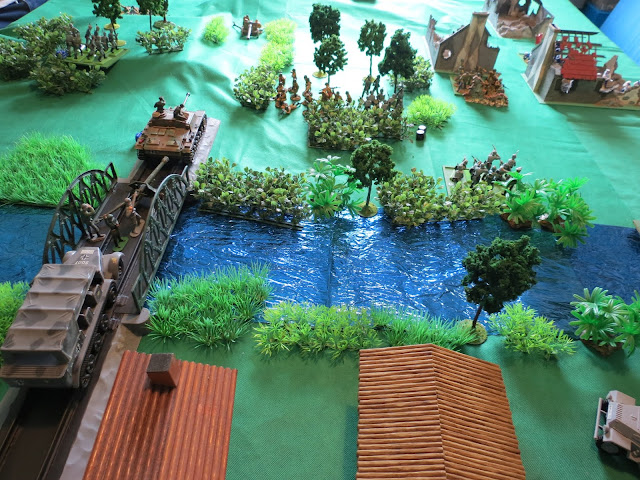 The infantry have effected a river crossing by boats, just as they did at Smolensk in 1941, to represent this each unit must first advance to the river bank then next turn it can dice to activate the crossing by achieving 6+ from a throw of 2xD6, if it fails it remains where it is. Needless to say, only infantry on foot can cross like this, vehicles must use the bridge. 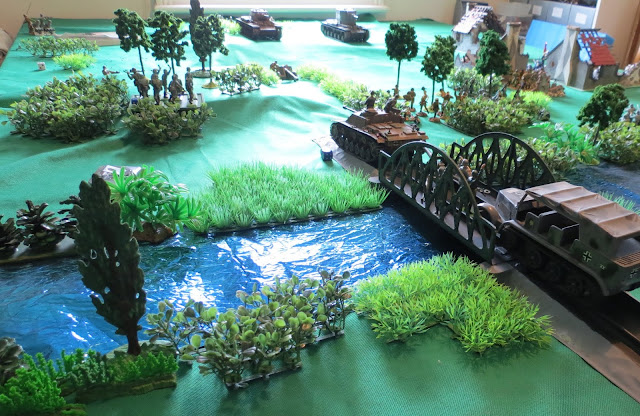 Units can move or fire in each turn but not both, apart from the mortars they all have a firing range of  2 feet.  The mortars have a range of 8 feet but needs a friendly unit to spot for them, the spotter needs to be within 2 feet of the target and have clear field of sight to them. 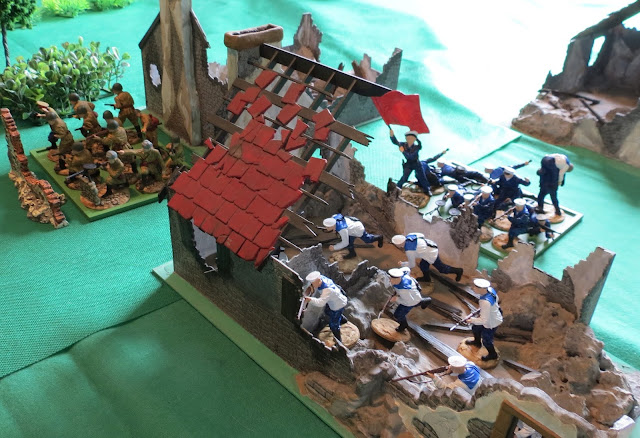 The two Russian naval units occupied the suburbs of the city, here represented by Airfix Strongpoint buildings which have been enhanced with fallen rubble and collapsed rafters. 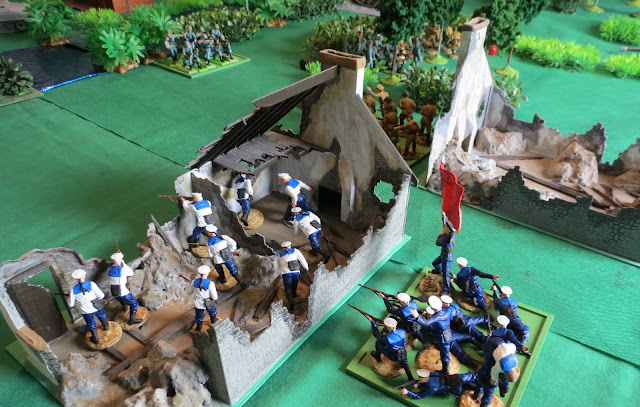 Heroes of the Soviet Navy scramble through the ruins. The individual figures are mounted on metal bases which enables them to stand on uneven or sloping surfaces and prevents the tumbling domino effect. To make two distinct units I painted all the riflemen as white jackets, so they could also double as WW1 Russian/German sailors, the figures with automatic weapons became blue jackets so can only be used for WW2 and later. 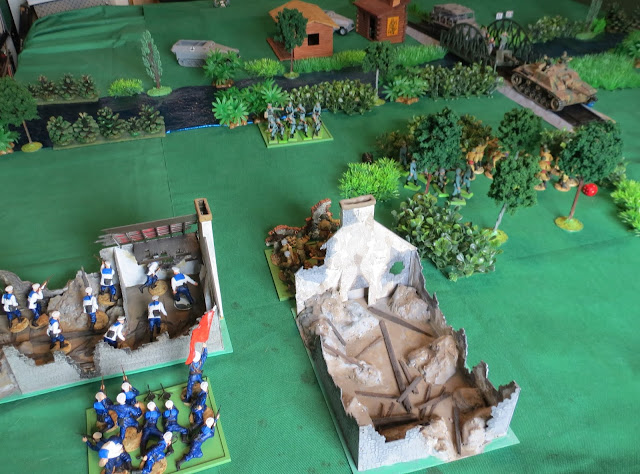 Out of shot, at the far end across the river the Russian partisans have finally attacked the German mortar unit but are more of a distraction than a threat and are seen off without difficulty. The use of partisans is another special rule which we devised for our last Napoleonic game (see here) they can appear from any piece of cover or any table edge at any time subject to being activated by a throw of 6+ on 2xD6 - a very simple but effective game mechanism. 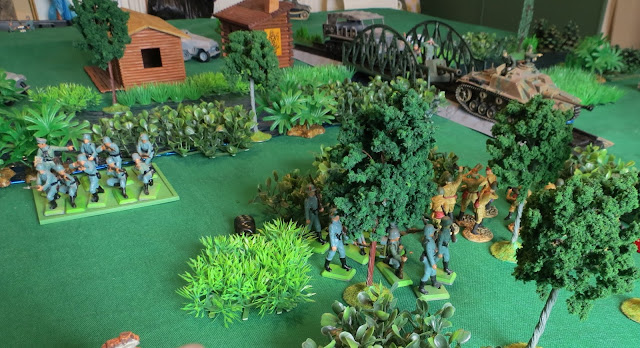 The German force has taken the bridge and cleared the surrounding woods but they are now too depleted to withstand the inevitable counterattack. 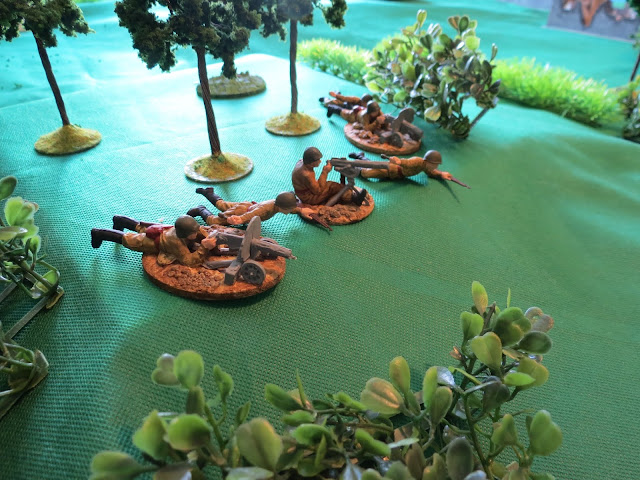 The Russian heavies move in for the kill as they retake the hill and woods around the bridge.  In hindsight I think I gave the Russians too much cover, even with just four units firing each turn they were able to pick off the Germans quite leisurely. Also I made a tactical error in trying to punch through with the armour from the start, I should have infiltrated infantry across the river one unit at a time to spot for the mortars and soften up the defences before releasing the tanks. Ho hum! 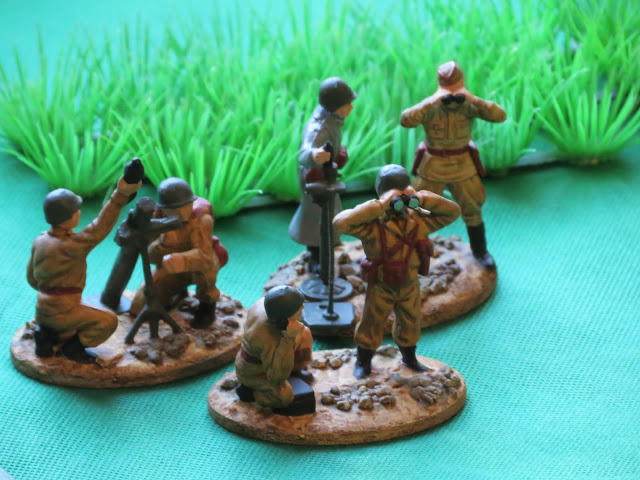 The Russian mortars, these truly are the kings of the battlefield.

In 1941 the Germans forced the crossing and held the bridgehead against repeated counterattacks but the Russians retreated due to the threat of being cut off in a pocket by other German armies advancing to the north and south of them. I could have replicated the effect of this by requiring the Russian commander to make a graduated withdrawal but I didn't think of that at the time.  We play and we learn.

We both felt that the game worked visually but wasn't as satisfying as the previous Napoleonic game, it was just a bridge too far!

A note on the use of unit types.

This post assumes some knowledge of the One Hour Wargames rules that we use, these are very easy to assimilate and are designed to give fast play games for players who are short of time and space.  For each historical period both sides are allowed up to 6 combat units, which must fall into one of four different unit types, so for WW2 games the rules provide for infantry, mortars, antitank and tanks.

This can be rather limiting if you hanker after a larger scale game and as we are not short of time or space we have expanded on the concept by increasing the number of units used and bringing in troop types from other historical periods, i.e. the machine age (WW1) rules provide for heavy units - slow moving but hard hitting and cavalry - very mobile but with reduced fire effect (which we used for the German reconnaissance unit). Other troop types were brought in from earlier periods; the Russian Guards and German Assault units used the zouave profile - elite units that move faster and hit harder, while the Russian Partizans use the skirmisher profile - light troops, very mobile but with reduced fire effect.

Email ThisBlogThis!Share to TwitterShare to FacebookShare to Pinterest
Labels: One Hour Wargames, ww2