The new year has seen a long awaited return to playing games with toy soldiers, give or take a day it was the 140th anniversary of the Battle of Isandlawna so it seemed only fitting to recreate it on the table.  Anthony has been diligently building up a superb Zulu War collection made by Little Legion Toy Soldiers and found a scenario for Isandlwana on the internet using the Battle Cry game system devised by Richard Borg.  We were joined by John, a long standing enthusiast of H G Wells "Little Wars" who acted as umpire.  Here's how it went: 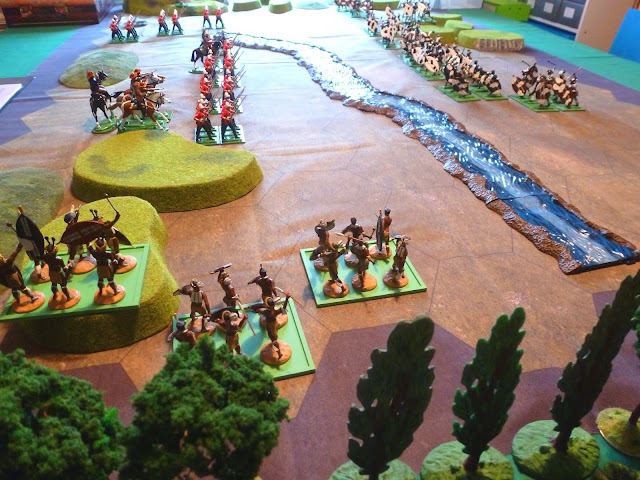 The Zulus deployed in traditional "Buffalo Head" formation, the main body (chest) formed up across the donga while the horns work their way around the flanks. The British infantry form up in line behind the donga, with Durnford's Natal Native Horse on the left flank and a gun in the centre covering the right flank. 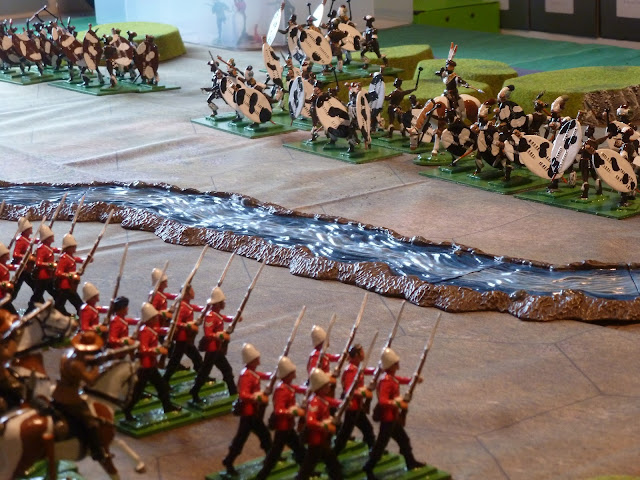 The Zulu line makes an impressive sight, they have no firepower but if they can close to contact their units have greater resilience in hand to hand combat.  The Zulu also have a slight advantage in command control to reflect their mobility and tactical use of terrain. 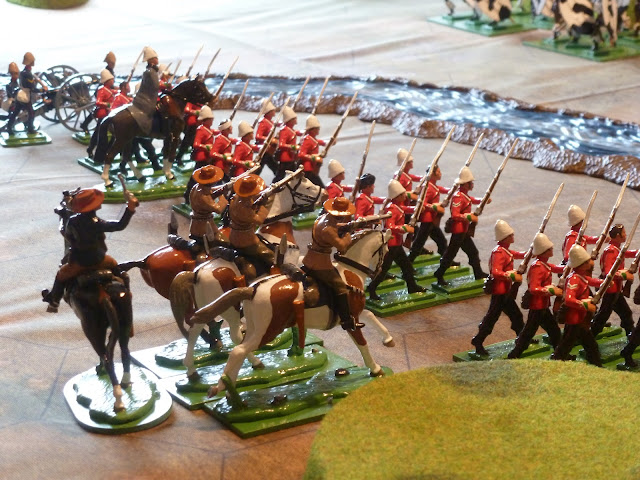 The British depend on being able to bring their superior firepower to bear. 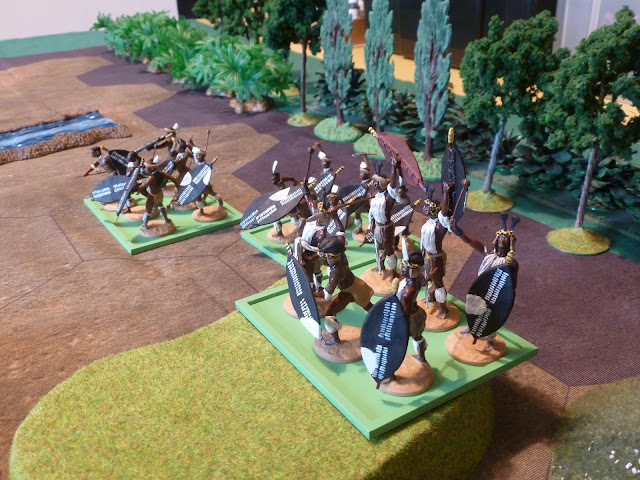 A few of my Zulus, produced by "A Call to Arms" made up the numbers, painting the laces on Zulu shields is a most laborious chore. 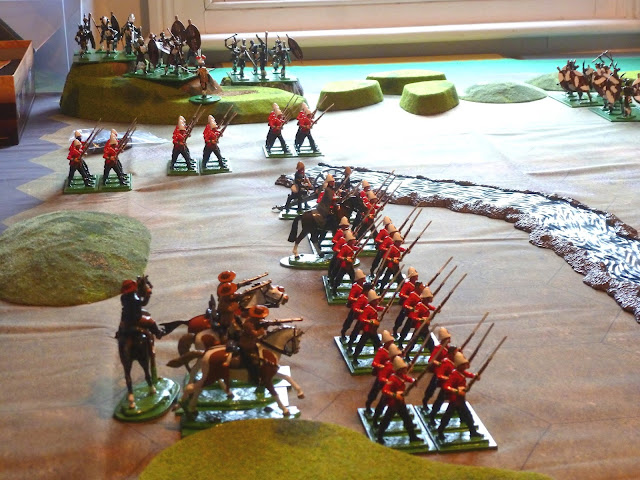 The British line waits steadily for the onslaught. 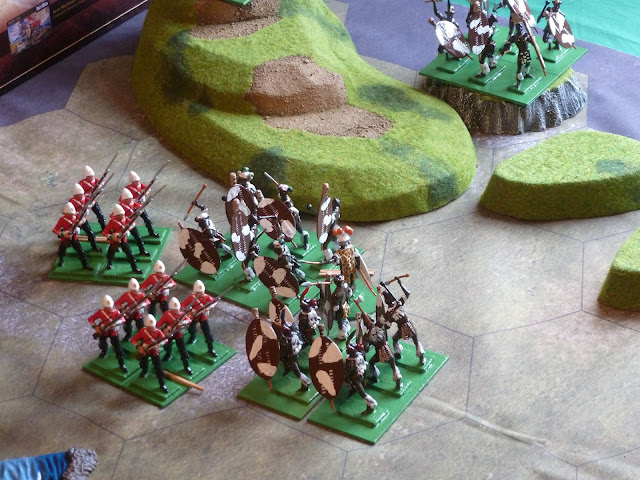 The Zulu right horn falls on the British left flank and steadily wears it down. 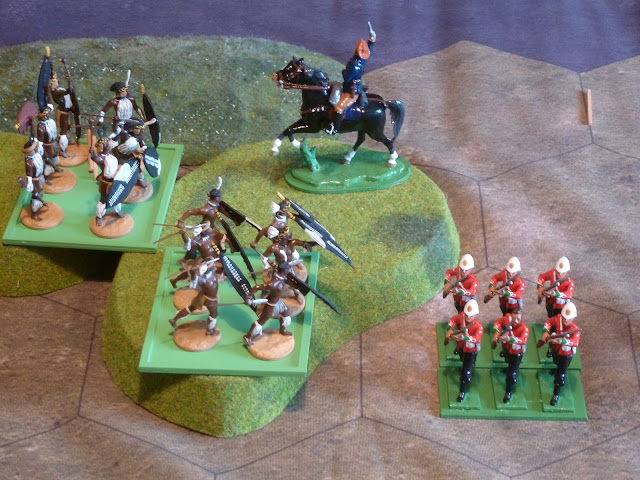 Durnford's troopers attack the Zulu left horn and stall the advance on that flank but are wiped out in the process. 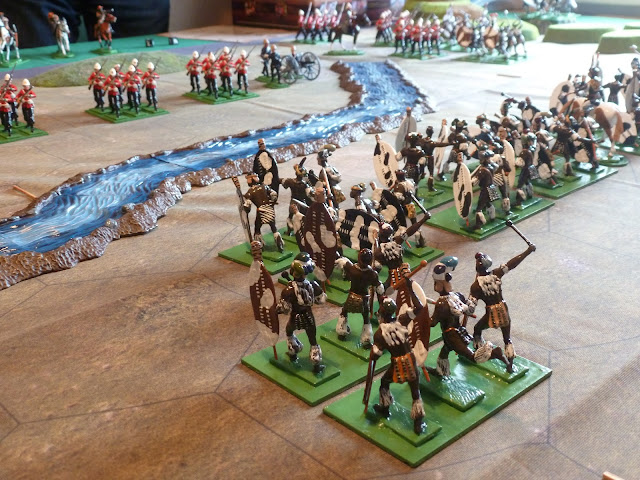 With the main action taking place on both flanks the Zulu centre waits to see the outcome. 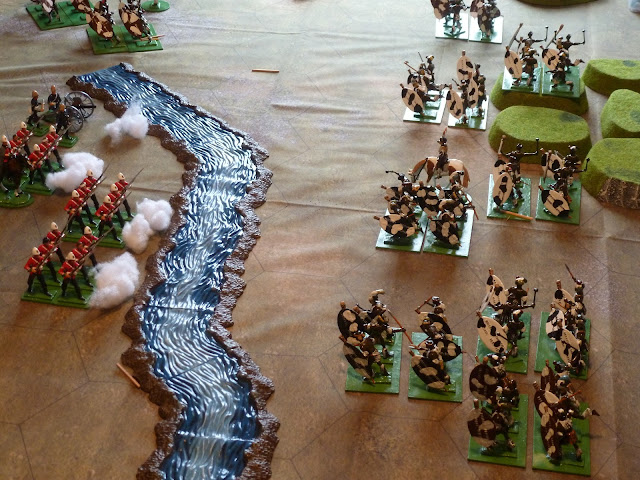 The British line moves up to shorten the range and fires off a volley forcing some of the Zulu units to fall back. 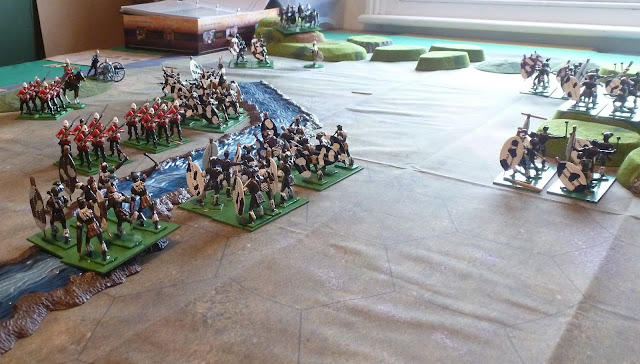 With the flanks being steadily overwhelmed by the horns, the chest surges forward in an all out attack. 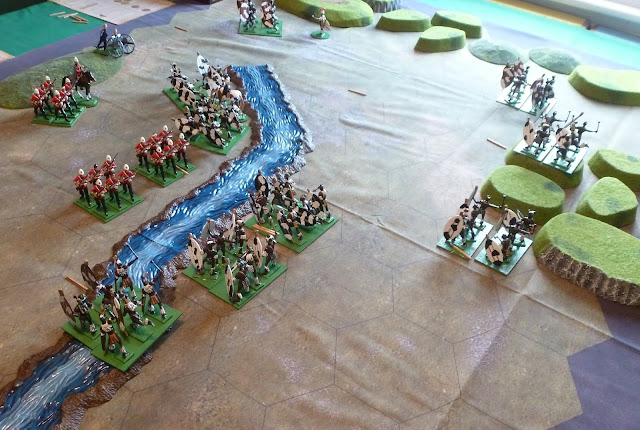 The British line fragments, and suddenly it's all over.

The game played out surprisingly similar to the historical narrative, which is the mark of a well designed scenario and what we always aim for.  It took about three hours to play (including a break for beer and bacon butties).

The above event will be held on 16th March 2019 in Woking and you can find all the details on the Group Forum here: LWR Forum 2019 Games Day  Anthony plans to put on another game using his Little Legions Zulu War collection at the event and will be using the Portable Wargame rules devised by Bob Cordery.  So if you want to watch or take part in some great wargames played using 54mm toy soldiers why not come along for the day.