We felt it was time to give the "One Hour Wargame" (OHW) rules by Neil Thomas another airing, Anthony and I both like the fast moving simplicity of this game system and it works well with 54mm toy soldiers.

Looking back through old copies of Wargames Illustrated for inspiration I found a scenario for the Battle of al-Musayfirah in 1925 during the Great Syrian Revolt.   After WW1 The League of Nations had given France a mandate to govern Syria and the French promptly instituted a number of measures to control the local tribes.  This inevitably lead to a nationalist uprising  by the Druze, which spread to the other tribes.

We chose scenario 15 from OHW, Fortified Defence, as it best reflected the actual battle.  Basically, a French Foreign Legion column was ambushed and badly mauled so the survivors took refuge in an old Turkish fort at Suwayda.  A relief column was prepared and an advance party sent forward to set up a defensive position at the town of al-Musayfirah as a staging post for the main column following behind.   A traditional colonial campaign in the finest traditions of P C Wren and Beau Geste, here's how it went: 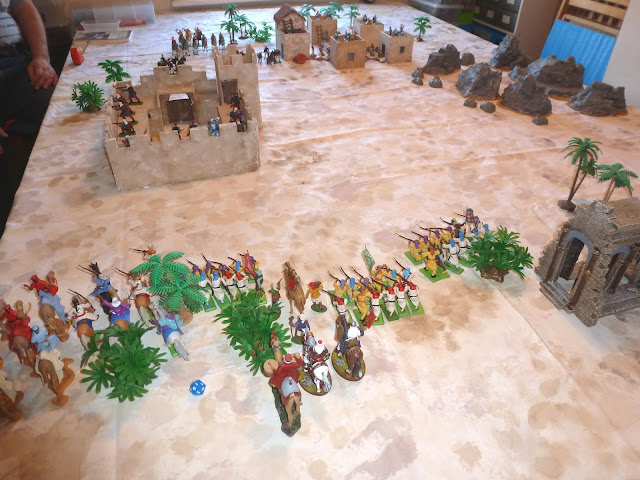 On the left is the old Turkish fort at Suwayda, the town behind it in the rear centre is  al-Musayfirah, to the right of the town is a rocky area, in the OHW scenario this should be woods but rocks are more suitable for the desert so we just gave them the same terrain effect for movement and combat as woods.

We diced to see what forces each side would get, the French got 3 Inf, 2 Arty and 1 Cav, while the Druze got 3 Inf, 1 Heavy and 2 Cav.  That seemed to represent the original forces quite well, I wasn't sure what to use for the Druze heavy unit, in reality they had some artillery but I couldn't find any references to machine guns or other heavy weapons so a little imagination was called for. 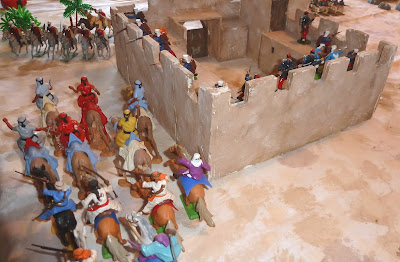 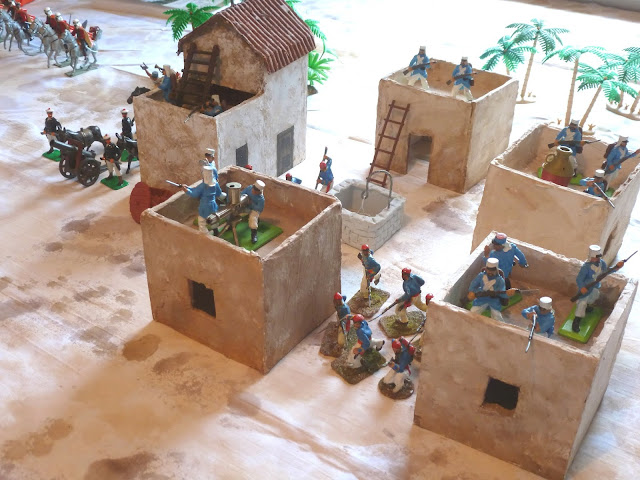 The rules give the two garrisons additional firepower, which reflects the actual battle as the French had machine guns which took a terrible tole on the attackers.   To even things up the Druze have a refit rule which allows them to create a second wave with all their original units at their starting positions, rather like the Zulu wave mechanism we used in our recent Rorke’s Drift game. 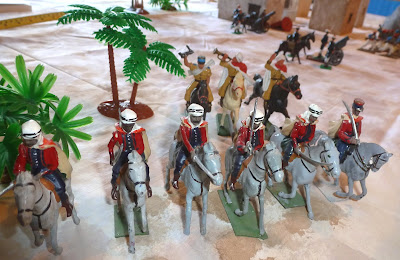 The French cavalry came from the collection of veteran wargamer John Ruddle who created them from bits and pieces of old Britains hollow cast Spahis, all repaired and repainted.  Behind them the French Command are represented by Starlux mounted FFL. 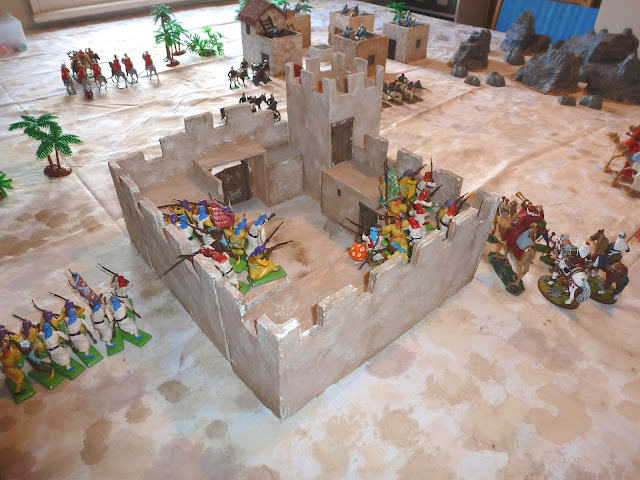 The first wave of the Druze attack succeeds in overrunning the defenders in the fort and pushing back the relief column.  At this point they invoked the refit rule, leaving the fort abandoned temporarily while the second wave formed up for a renewed attack. 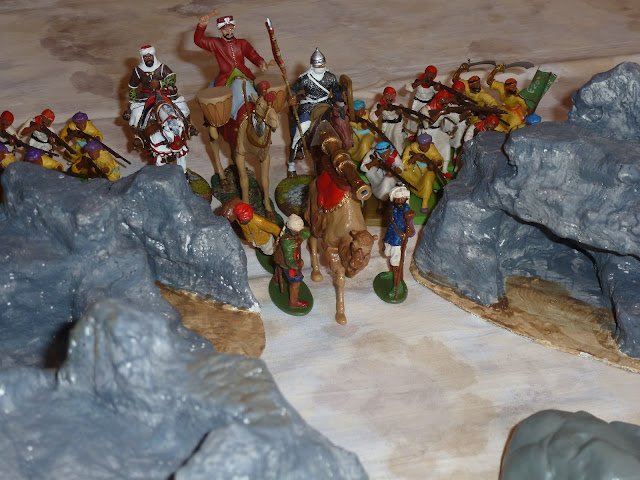 In the Druze second wave one unit has reoccupied the fort while the main push is directed against the garrison at al-Musayfirah.  Here the remaining infantry and Command, with heavy unit attached, use the cover of the rocky terrain to advance for a mass attack on the town.  The camel borne gun is the handiwork of Ross Macfarlane, as are the fort and town buildings. 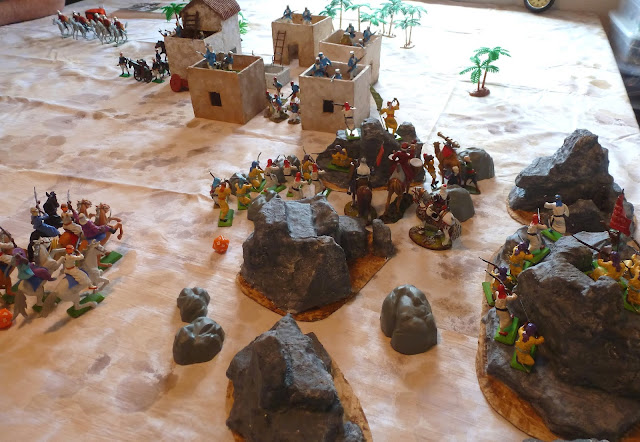 The all out assault goes in, Druze mounted units rush the town while the foot provide covering fire from the rocks, will the beleaguered garrison hold out? 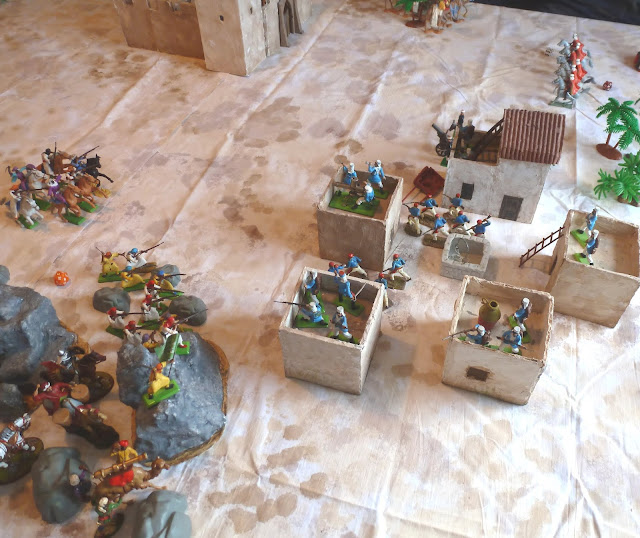 As we reached turn 15 and the end of the game, the superior firepower of the French forces carried the day.  A bombardment of the fort drove the Druze defenders out, leaving it unoccupied, while the mounted units caught in the open were wiped out by the French mountain artillery. 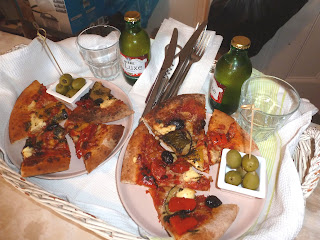 Anthony insisted we take a picture of the lunch, l'd like to tell you it was something suitably North African but clearly it's traditional beer and pizza.

The game played out very similar to the real battle, in 1925 the Druze suffered heavy casualties from the French machine gun strongpoints in al-Musayfirah.  They did manage to break into the town and promptly made off with all the columns horses and donkeys, but the attack through the rocks was broken up by a continuous bombardment from French aircraft.
Posted by Brian Carrick at 12:55