Across the blogosphere collectors and wargamers are running games in memoriam to Stuart Asquith who sadly passed away recently, I hadn't cleared up after our recent game set in North Africa so decided to play a solo game using the Big Wars rules written by Stuart and Jack Alexander.  Big Wars covers the period 1880 to 1914 so I thought the Battle of Tanga fought during the WW1 campaign in German East Africa would squeeze under the wire.  I had to take a few liberties historically but here's how it went: 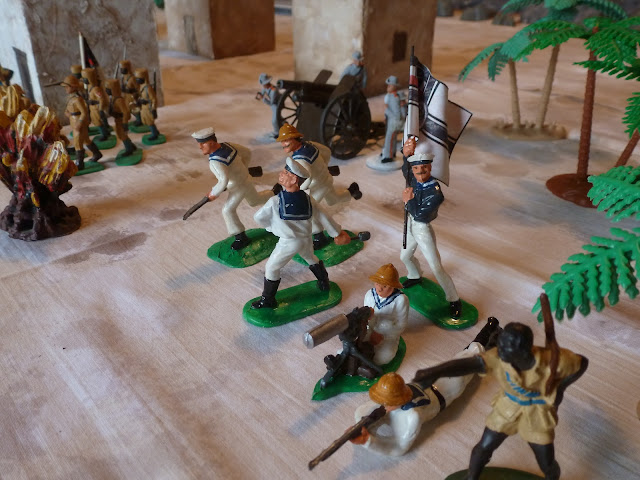 In November 1914 Britain sent an Indian Expeditionary Force of about 8,000 men to invade German East Africa, the plan was to make an amphibious landing at the port of Tanga then advance north to meet up with troops marching south from British East Africa, trapping the German "Schutztruppe" in a giant pincer movement.  A simple plan, what could go wrong?  Er….. plenty apparently. 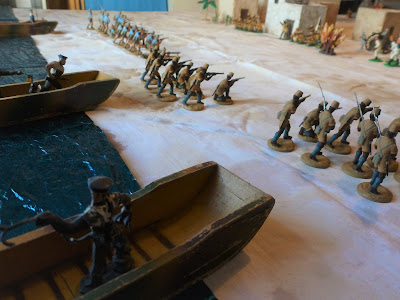 There was an unofficial Coastal Truce agreement under which the Royal Navy were required to give the Germans 24 hours notice of any intended attack (I kid you not!).  On 2nd November 1914 the Navy demanded unconditional surrender of the town and port, this was ignored and next day the IEF began landing, no resistance was expected from the token garrison.  However, on receipt of the demand the German commander had called for reinforcements and started digging in (well you would wouldn't you) 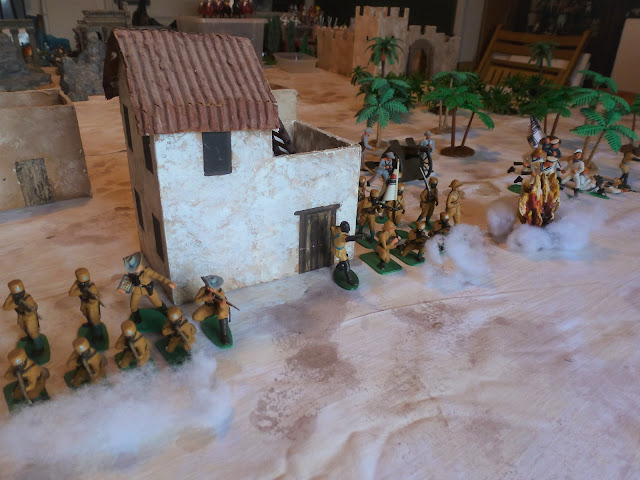 Tanga was the coastal terminus of the Northern Railway and the Germans began rushing troops by train, around the clock, to the port.  The initial IEF landing on 3rd November was supported by salvos from the supporting naval escort, it had little effect.  Above, the German Askaris were armed with the obsolete model 1871 rifle which fired black powder rounds, clouding them in smoke with every volley. 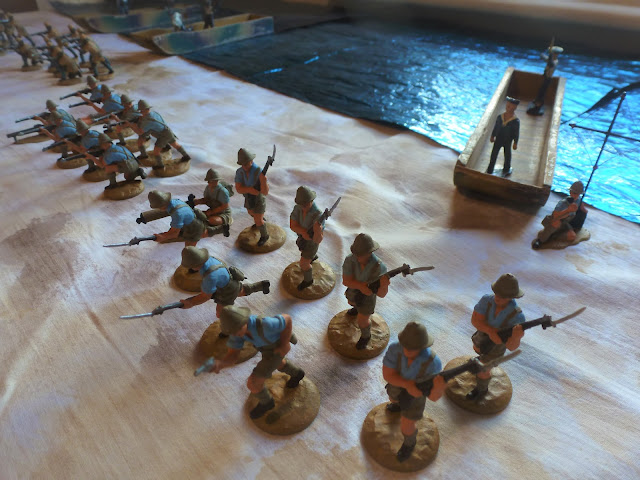 Here the IEF debark from their landing barges.  I played the game on an area of about 5' x 5' which I found from previous experience is fine for Big Wars, movement distances are quite short and casualties from firing fairly light until you get to quite close range, so you really need to get troops into melee to get a decisive result. 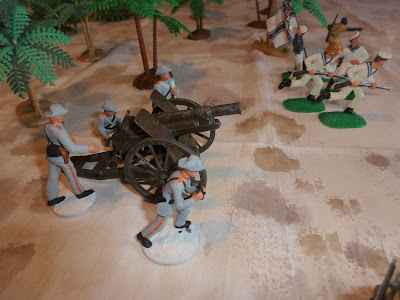 A couple of liberties taken here for the benefit of a good game.  German naval units fought on land throughout the campaign, but not at Tanga, also the Germans had two field artillery pieces but they arrived too late to take any part in the battle.  On the British side most of the units were from Indian Regiments but I have included units of the Kings African Rifles who also fought throughout the campaign but not at Tanga. 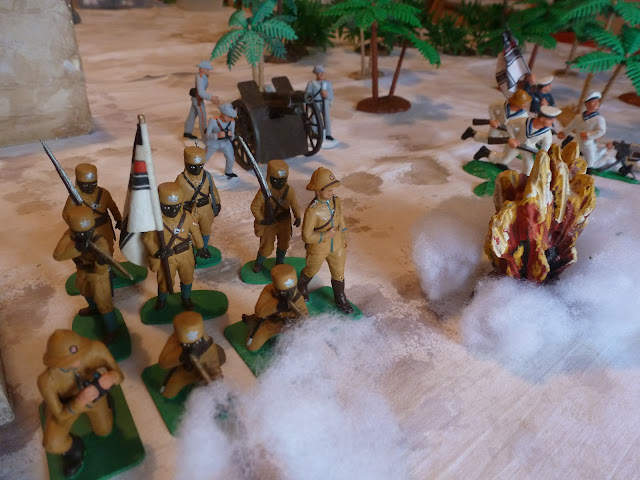 The Askaris fall back steadily while keeping up a steady fire at close range which begins to blunt the advance.  The rules allow artillery and machine guns to move or fire, but movement rates for MGs not mounted on carriages are short so the British support units fell far behind the infantry advance. 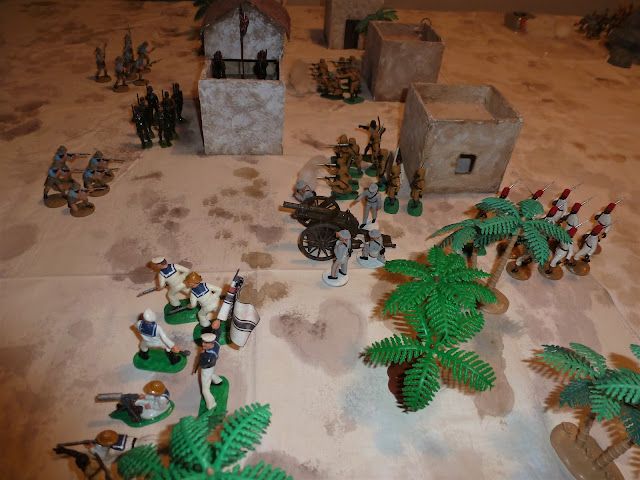 The IEF occupy part of the town and the Ghurkas hoist the Union Jack but their success is short lived as German reinforcements continue to arrive and a counter attack throws the British back.

A fun game, quick and easy to master, and a good scenario for solo play as there isn't much scope for tactical movement.  I playtested the rules quite a bit when they first came out in 1993 and used them in a "play by email" game that I hosted a few years ago (see Big Wars link in right hand column) but apart from that they've been rather overlooked, perhaps it's time they got a bit more of a regular outing.

In 1914 the IEF outnumbered the Schutztruppe by 8 to 1 so, not unnaturally, the British Staff believed the battle would be a walkover.  The Navy were ordered not to support the attack so that the town might be taken intact for use by the occupying force, for the same reason the IEF mountain batteries were not landed.  The result was that the entire IEF was evacuated on 5th November leaving most of their equipment behind, perhaps not the most ignominious feat of British arms, but well up there.