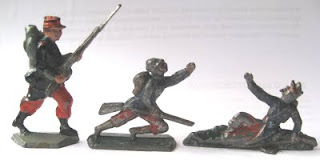 Making your own toys soldiers at home has long been a popular pastime, perhaps not so much in recent decades with the universal shift towards political correctness and safety concerns, but there used to be a big market for the sale of moulds to cast your own in lead. Homecasting moulds were sold extensively across Europe and the U.S. under many diffferent trade names but the figure designs invariably come back to one company in Germany, Gebr. Schneider (Schneider Brothers).

Sometimes enterprising individuals would produce figures from these moulds and paint them to a good standard for resale (as I suspect is the case with the first figure above) but mostly they were cast to a poor standard from whatever mix of metals could be found, often fishing weights or, according to urban myth, lead stripped from the church roof! The figures are mostly about 40mm high but size varies all the way up to about 60mm. They are exactly the sort of toy soldier that you will dig up in your back garden, crushed and suffering greatly from lead rot, and then be disappointed when you put it up on ebay and it dosen't sell. They are generally very crude and get little interest from collectors but I rather like them and they are great for playing wargames.
Posted by Brian Carrick at 14:26