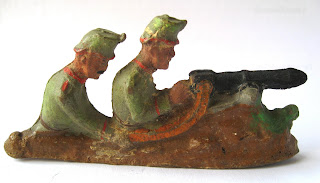 This semi flat composition machinge gun team were made in Germany around 1910 by Mars Hindenburg. They are depicted from the waist up as though firing from behind an earthwork and wear the flat topped felt Jaeger helmet, which is correct for mg crews of the period, rather than the leather spiked picklehaube. I rather like to see groups of figures that have been sculpted to sort of morph together or into their surroundings, it somehow adds something to the design for me.