Way back in the early formative years of my toy soldier collecting interest I recall a picture of the hollowcast metal figure of the Duke of Marlborough made by toy manufacturer Cherilea. I think I may have seen it in one of J G Garratt's books?  Whatever, but it struck me as a very fine piece and I've admired it ever since. Everything turns up eventually and after nearly 50 years one finally came my way, so I thought I'd share it. 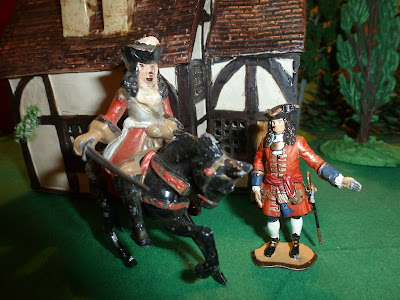 Cherilea have a well deserved reputation for producing some of the most poorly sculpted and anatomically challenged figures in the entire world of Toy Soldiers, but it wasn't always the case. Back in the 1930's Wilfred Cherrington, a co-founder of Cherilea, worked with the gifted figure sculptor Richard Courtenay and produced the moulds for his early series of medieval knights (Greenhill, Old Toy Soldier Newsletter 1987).  Influence of some sort must have played between the two men as Courtney's early foot figures are very toy like while Cherilea later produced a short range of very fine figures known as the "Baronial Series"

For some reason the figure of Marlborough came with the horse and sword designed for the Black Prince, I wonder why they did that?  I always thought the figure looked a bit over sized for this horse but both are nice sculpts.  Alongside the Cherilea figure is an Infantry Officer of the period made by Tradition, this is a modern white metal collectors figure.

The M1 knight (often called the Great Helm Knight) was also made in plastic from the original hollowcast moulds but sadly Marlborough and the Black Prince never made that transition.  I don't believe in being prissy with my toys so this Marlborough will be taking his place on the wargames table just as soon as I get his troops painted up.