Dorset Greys, who are they?

With all the Collectors Shows cancelled I was feeling very much in need of a Toy Soldier fix, so trawling through everybodies favourite internet auction site I came across these: 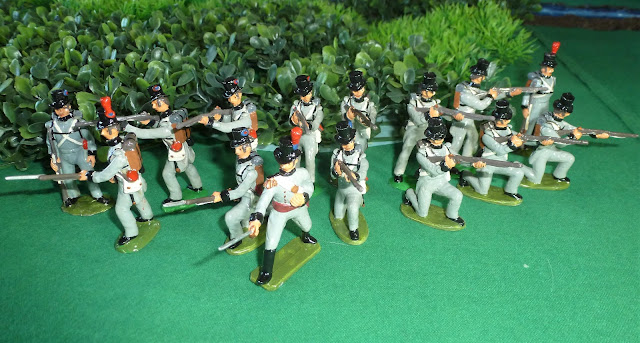 They were listed as Dorset - Crimean War period - Infantry grey uniforms.  I could see from the sculpting and painting style they were made by Dorset Model Soldiers (they're also marked GB under the base - Giles Brown, the founder of Dorset) but Crimean War?  I'm less comfortable with that, they look something more like U.S. infantry of 1812/20 to me, what do you think?

I may have to do a bit of basing to make them more table stable.  I have no qualms about mixing plastic with metal figures in my collection but have tended to avoid the later because of the weight when transporting them.   Anyway it's nice to be able to add a complete new unit where someone else has done all the work.  I plan to use them as the nucleus for a Napoleonic Swedish army, another project which has been on the back burner for a very long time!