Queen Mary had some Toy Soldiers.

Queen Mary, wife of King George V, was an inveterate collector with a penchant for things miniature, and she was reported to be "extremely surprised" when it was suggested she be presented with a dolls' house as a gift from the Nation.  But this would be no ordinary dolls' house, it was to be designed by Sir Edward Lutyens, the architect responsible for building the Cenotaph in Whitehall, and would be furnished with contributions from all the major manufacturers and artisans of the day to promote the names and products of Britain's finest craftsmen.

William Britains, being the leading toy soldier manufacturer of the day provided a miniature example of a box of their toy soldiers for the dolls' house nursery, and they made a second set for the daughter of Frederick Britain, this is what it looks like: 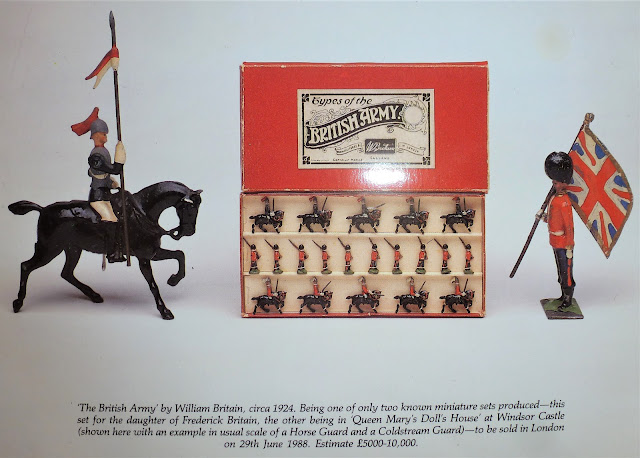 The miniature set was never issued commercially and never featured in any of the catalogues or product lists.  In 1988 the second set was put up for auction by the Britains family and this postcard was sent by Phillips Auctioneers to collectors on their mailing list in the hope that one or more of us might have the odd ten grand to spare.  I attended the auction and the bids fell well short of the reserve, I don't know if it was subsequently sold by private treaty but have never heard anything of it since.  In fairness it's very difficult to put a value on a set like this which is literally unique, given that the set in the Royal collection will never come to market, and that in every field of collecting there are those individuals for whom money is no object!


Work on Queen Mary's dolls' house began in 1921, it was first displayed at the British Empire Exhibition of 1924 and is currently on permanent display in Windsor Castle (although at the time of writing it is closed until further notice).