Or at least my interpretation of them, I'm not sure they'd score many marks for accuracy but then they are just toys for playing 54mm wargames.  Mostly converted from Britains Deetail knights, except for the rearing figure in the middle which started life as a chess piece from a Harry Potter partwork!  The shield designs tie them all together as being part of the same unit, maybe one day I'll get around to doing the French opposition? 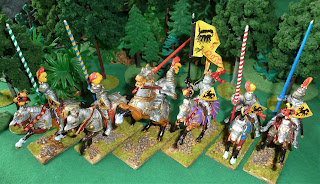 You'd think that one set of figures, which are mostly all silver would take no time at all to paint?  Not so, these have taken an eon, not that they're difficult but just down to a lack of enthusiasm, it's been a lost year, many, many projects started, hardly any finished.

In the absence of any games to report I may just start posting up random pictures of toy soldiers, these chaps have already featured on Facebook so apologies if you're fed up with seeing them!