This rather nice little set of Battleships has left me with something of a quandary. 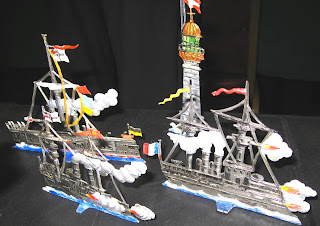 I think they are meant to be Pre-dreadnoughts (though I am no expert in ship design) and show two ships of the Imperial German Navy battling it out with a sole Frenchy off the coast of Denmark, as denoted by the lighthouse sporting the Danish flag.  But what does this group represent?  I don't think it could be a Franco Prussian War encounter because the ships look much later and anyway the Imperial Navy wasn't founded until 1871, also I can't find any mention of an action between German and French Naval forces in the North Sea in WW1.
Who made them?  Well Haffner and Spenkuch seem to have been the the main providers of semi flat battleships but I've looked through several books on early German leads and the examples I've found by these companies don't look anything like the above.   The nearest thing I could find in terms of sculpting and paint style is by Heyde, which is curious because this firm mostly made it's vehicles, vessels and accessories 3D in tinplate.

A great set, I particularly like the ram on the French ship but the secondary armament firing from a cupola half way up the mask seems a bit incongruous to me, is this correct?
Posted by Brian Carrick at 07:46