Unveiled by W. Britain at the London Toy soldier Show last weekend was this rather dramatic model of a British artillery limber team racing to cut their way through the Zulu hordes and rescue their 7lb gun.  The set has been titled "Desperate Escape" 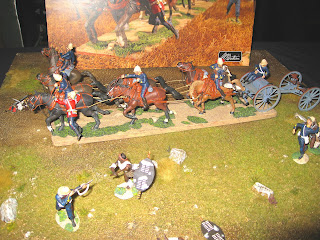 A nice piece of eye candy which I'm sure will appeal to modern W. Britain collectors but why oh why did they mount it on what looks like a slab of rough cut MDF board?   And having crafted such folly why not extend it to the gun instead of cutting it off at the limber and leaving the gun looking like an after thought from another set?  Having said that I've looked at the set on the W Britain website and the base appears much thinner and extends to include the gun so perhaps this is just a prototype. 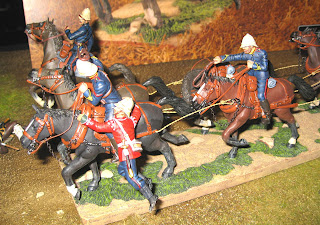 Due to be available in September it will be a limited edition of 600 sets and should you choose to order one you will get the grand sum of 1p change from five hundred quid.
Some further posts on the London Show to come when I get time, some nice French plastic and the latest offering from the Skirmish Wargames Group.
Posted by Brian Carrick at 06:24