I'm always on the lookout for something unusual when I go to the shows and here is something I was really pleased to find, it's the Clairet Arctic set.  I say Arctic set because it's got Inuit people and Polar Bears but commits the universal sin of including Penguins which are only found in the Antarctic.  Marx, Britains and Timpo all made Polar/Exploration sets but I don't think anything quite compares to Clairet, in fact of all the French manufacturers I rate them the best, being on a par with Elastolin for quality but with the advantage of being 54mm. 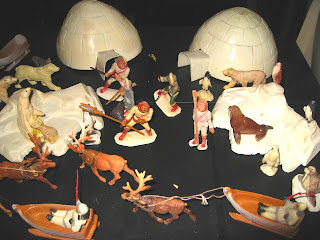 I was really taken with the ice flows and the sleighs pulled by reindeer, they're a nice touch to a very original set. 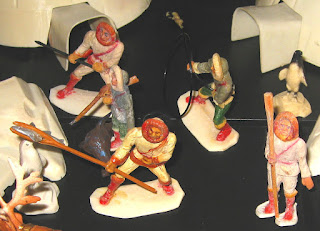 A close up of the figures, note the chap who has caught a fish in his two pronged trident, the one standing beside him with an oar looks as if he's frosted with ice but in fact this is a chemical reaction in the acetate plastic which will degenerate further over time causing crystals to form all over the figure.  There are some other poses which are not included here - two men carrying a polar bear slung from a staff between them and a man with a hunting eagle tethered to a pole. 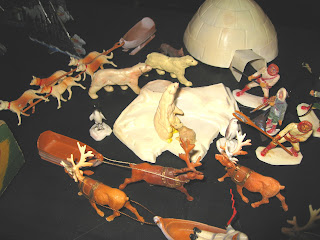 Final shot shows the sleigh pulled by huskies which I couldn't get into the main picture, also a better view of the huntsman with rifle who has a dead walrus at his feet
Posted by Brian Carrick at 19:32