The Skirmish Wargames Group are well known for picking some unusual scenarios but at the London Toy Soldier Show in June I think they surpassed themselves with a game set around the slave revolt of 1792 in Saint Domingue (Haiti).  A very confused affair in which plantation slaves rose against the French colonists and were armed by the Spanish (who occupied the eastern end of the island) and the British, who mounted an amphibious landing.  They then rallied to the French when the Revolutionaries abolished slavery and, led by the very able freed slave Francois Toussaint L'Ouverture, they ousted the Anglo Spanish garrisons and set up their own government.  Subsequently Toussanit found himself fighting the French again when Napoleon became First Consul and sent an expedition to reclaim the Island and reinstate the slave trade. 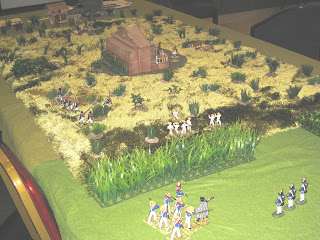 An overview of the table﻿, in the centre a plantation building surrounded by bush and cane fields, at the far end the slaves are rousing themselves with voodoo incantations.  The fun thing about the SWG is their inventive use of scenery and accessories, the bushland is made from teddy bear fur while the plantation building has seen service as a Russian dacha for various periods. 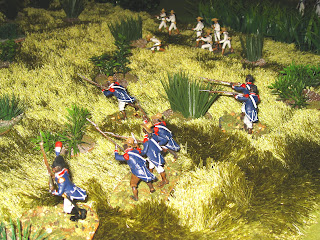 The insurgents led by Toussaint L'Ouverture advance through the bush, the great man himself is in the left foreground sporting a bicorne with red and white plume, a band of armed Mulattos move forward on their right flank.  Toussaint and his men are new metal figures made by Beau Geste of Argentina. 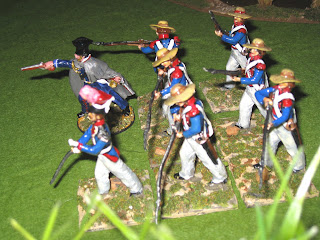 Among the troops sent by Napoleon to retake the island in 1802 were these Polish regulars, also made by Beau Geste, and led by an officer from Replicants 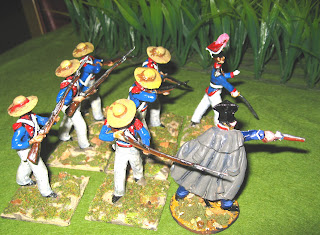 When the French expedition arrived Toussaint led his men into the interior and fought a guerrilla campaign, which is the scenario for this game.  Although Toussaint surrendered early on and the country was soon pacified after that, the withdrawal of freedom and equal rights soon led to further insurrection and mutiny against the French, whose biggest enemy was now yellow fever. 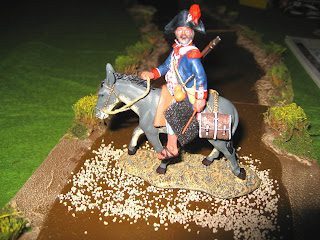 I'm not sure where this chap fits in the story but he's a nice character figure and in period costume so why not? 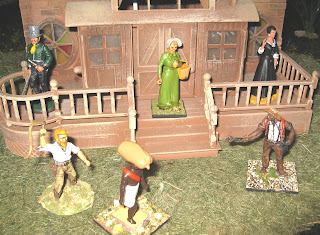 The French colonists, figures from various sources and in sizes from 54mm up to 70mm it just shows that you can get away with mixing scales if you just don't stand the figures too close together! 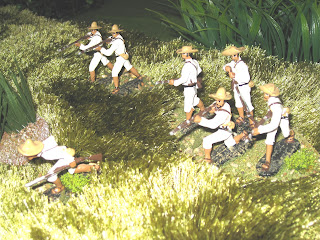 The free mulattos were given equal rights with white and creole colonists after the storming of the Bastille but this was also revoked by Napoleon when he became First Consul. I think the mulattos above are conversions but I'm not sure from what. 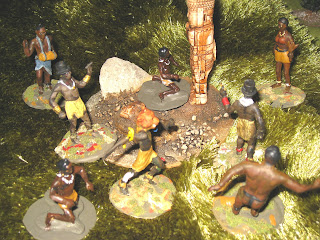 The slaves practising voodoo are made from Marx Daktari set natives and some Hong Kong Tarzan figures.
Posted by Brian Carrick at 12:01