I went along to the London Toy Soldier Show on Saturday and among the sights were these rather lovely 20mm masterpieces by John Niblett, they really are hard to find and in fact these are the first I have ever seen in the flesh.........so to speak. 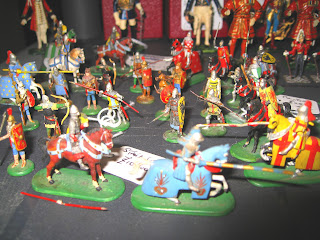 John Niblett is probably best known for his work on the Airfix HO/OO figures but apart from his own 20mm range shown here he also sculpted 54mm figures for Malleable Mouldings and a range of historical figures in armour under his Modelmakers brand which were sold through the Tower of London.
Malleable Mouldings are best known for their early plastic figures made from designs by Holger Eriksson at the Treeforest Mouldings works in Wales around 1946 but when this didn't take off they moved to Deal in Kent where they started making metal figures for the collectors market, still using Eriksson designs but now also some by Niblett who was based just up the road in Sidcup.  Their catalogue boasted that they could make figures of any regiment to order and the Christmas 1952 edition of the Illustrated London News carried a full colour article showing 25 of their figures depicting the evolution of the Coldstream Guards from 1650 to 1950.  In 1957 they were still on sale at Hamleys, the famous London toy store, alongside collectors models by Carman, Argosy (whoever they were) and Greenwood.
Niblett was still advertising his design and casting services (now moved to Herne Bay) in Military Modelling magazine up to the end of 1978, there is a picture of the figure of Robert the Bruce that he produced through Modelmakers on my old website (now dormant) HERE 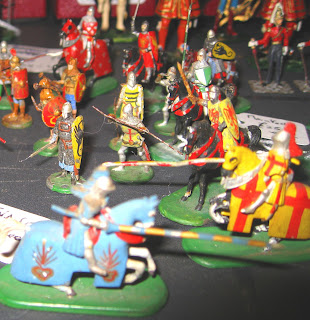 A selection of 20mm Romans, Normans and Medievals, at top right is a 30mm figure (also by Niblett) of the Honourable Corps of Gentlemen at Arms, the bodyguards to the British Monarch.
The picture belies the fact that the foot figures are little bigger than the size of my thumbnail and given that they were originally sold through Hummels of Burlington Arcade (where you can buy all kinds of stuff you never knew you needed at prices that will have you clutching at your chest and gasping for breath), alongside Courtneys and Pings, it does make me wonder if they were ever actually meant to be wargaming figures?   Well Niblett also sold them unpainted and after he died in 1980 they continued to be sold under the Tribute Figures brand, for more detail about Niblett visit the Vintage 20Mil website 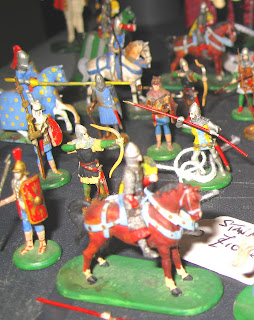 The figures were on the table of dealer Adrian Little who trades as Mercator Trading priced at £10 foot and £25 mounted.  Adrian told me that he usually takes Nibletts to the shows in the US, where there is a healthy appetite for them, because they give a good return relative to the weight and room they take up.  A bit like smuggling diamonds then.
In hindsight I should have bought some, well one at least.  Maybe I will, next time. Perhaps.
Posted by Brian Carrick at 10:44